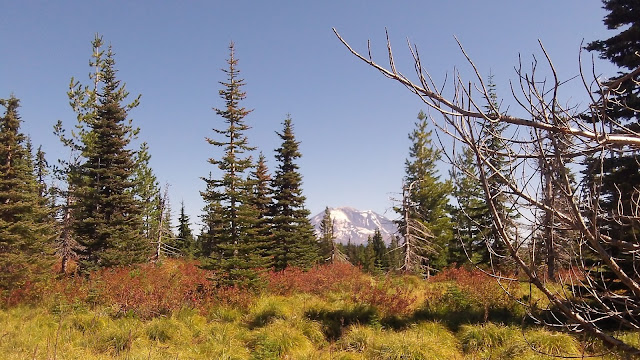 The next morning, despite it being freezing once again, we managed to make a decently early start for the first time in several days. Before long the weather began to warm up, and the rising sun revealed a bright blue sky. The terrain was easier today than it had been in a while, so Zach and I hiked nine and a half miles before taking a break, winding our way through fir forests and huge fields of huckleberry bushes, snacking on berries all the way.

As we walked through a huckleberry field, approaching a jeep road where we intended to take our break, we saw a pack of dogs galloping down the trail toward us. We paused, wondering whether to worry or not, and in turn they balked about ten feet away, barking ferociously. Some of them growled and raised their fur, but most were wagging their tails and smiling in between growls. We stood awkwardly for a minute, then saw the owners up at the jeep road: a posse of women who were trying without much success to properly buckle up some brand-new backpacks. They saw what was happening and called the dogs off, allowing us to proceed. 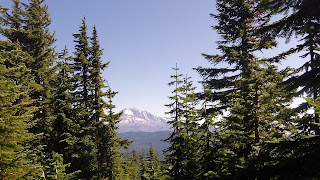 This was a busy place— several trucks and cars were parked along the dusty road, and groups of hikers and families with gallon buckets were out gathering huckleberries. Some people were even camped nearby in RVs. Zach and I sat in the shade of a little tree and ate a snack, trying to keep our peanut butter and Fritos away from the friendly dogs.

At last we took off hiking again. It was another long day, but a pleasant one, through mossy creek-riddled woods. We glimpsed Mount Adams’s handsome snowy peak often.

I don’t remember much about that day, but it was barely 6:00 when we reached a paved road and realized that we had hiked 23.5 miles, which was way “over budget” for Washington. Good on us! This road, Highway 23, led down to the tiny town of Trout Lake, but we’d heard that hitching was difficult because this road was deserted.

Mr. T., the 17-year old who was hiking with his sister Stampede and her boyfriend Gingersnap, was sitting by the road, drinking a beer. He’d just returned from Trout Lake and was waiting for Stampede and Gingersnap to catch up with him.

“Who on earth gave you a beer?” I asked.

He shrugged. “It was in the hiker box.”

We chuckled, then sat down for a snack and a debate. We weren’t sure whether to try hitching in or not. Zach argued that morale was more important than mileage, and we’d already gone a good distance today. We should try to hitch into town. I felt a little bit nervous, since darkness was encroaching— if we hitched in, would we be able to hitch back out before nightfall? Zach said we’d figure it out. And, since I was now less prone to worrying, I let it go.

Shrek was already by the road, trying to hitch, so we stood with him to see what would happen. After a long time of waiting, a car drove up and pulled over. The driver apologized, saying she only had one seat. We conceded to Shrek, and they drove off. Zach and I stood by the highway, eating Snickers and wondering if anyone else would drive down this deserted road. At last Zach said, “I think we should look for a ride until 7:30, and then after that just give up and camp here.” 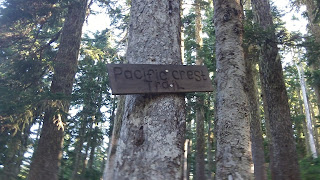 It sounded reasonable, so we stood out for another fifteen minutes. At exactly 7:29, a pickup truck raced into view, and it throttled down and pulled up on the shoulder beside us. Without even asking us where we were going, the guy in the driver’s seat jumped out and said, “Hi! You can ride in the back, but try not to step on the mushrooms.”

We soon saw what he meant— the back of the truck was filled with buckets of different kinds of mushrooms (don’t worry, they were legal), as well as a random mattress covered in a tarp. Zach and I plopped down on the latter, and the guy jumped back in the truck and took off down the road.

It was chilly by this point, a little after sunset, and rushing along with the rows of trees on either side of the highway racing past us felt giddy and magical. I leaned back on the mattress, hugging my jacket around myself and snuggling up next to Zach while the breeze whipped around us.

Suddenly, the forest cleared and we were racing through open countryside, with just a single row of trees on either side of the road. Directly behind us stood Mount Adams, bathed in sunset light, and an amazing optical illusion was formed: because the trees on either side of the highway were receding quickly into the distance, the mountain appeared to be growing larger by the second. Zach and I both noticed it, perhaps because our brains weren’t used to experiencing the world at such speeds, and gasped. This hypnotized us for most of the 13-mile drive.

At last the truck pulled up into a tiny town, with a few wood-shingled buildings and little rows of cute, well-kept houses. They dropped us at the general store and wished us luck, driving off into the night.

Zach and I walked into the building, which was labeled Trout Lake General Store: Meats, Groceries, and Sundries. It was decorated with posters depicting rifles, huckleberries, elk, and grotesque caricatures of rednecks and busty women with guns. We walked inside to find a store packed with different ingredients, most notably a range of huckleberry-inspired dishes. We rooted through the hiker box and poked around the store. We found Shrek and asked him if he’d found a place to spend the night, and he said he hadn’t.

Zach asked the lady at the front desk if there was a park or something where we should camp, and she said that the city park would allow you to camp for $10 a person, or we could rent a room here for $25 a person. We decided that we’d go ahead and camp, even though that was more money than we wanted to spend.

However, as we were getting ready to leave, the woman who actually owned the store came bustling up to Zach and said, “Sorry, my employee didn’t explain correctly. The rate here is $25 a room, no matter how many people you put in it.” 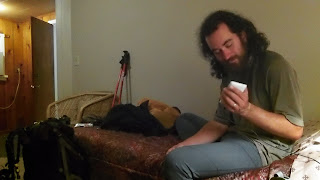 We looked at Shrek, and he nodded. The three of us decided to split the room— it was the first time on trail that Zach and I paid for a roof over our heads, and also the last.

We also decided to share a full gallon of Tillamook Huckleberry ice cream, which we bought took upstairs to the room. It was a cute room, with several cots and end tables and lamps. We had access to a bathroom and bathtub (no shower). The three of us got our spoons and destroyed the gallon of ice cream in a single sitting, then took turns cleaning ourselves up.

Clean and in our “laundry clothes” (rain jackets and shorts), I sat and read Sunset magazine and tried to calm my mind. I was finally starting to feel relaxed about money— at this point, we would have to try really hard to get ourselves into irreparable debt, and that helped me to be less uptight.

Shrek hung out with us for a while, then went downstairs in search of a cigarette. Zach and I laid down on our cots and turned out the lights. I kept on waiting for Shrek to come share the room with us, but he never did. In the meantime, it was hard to sleep on a bed— our sleeping pads (massive air mattresses that they were) were more comfortable. And I was used to the outside air being cold instead of warm. Still, I considered the money well spent— we had to take advantage of roofs over our heads while we could. 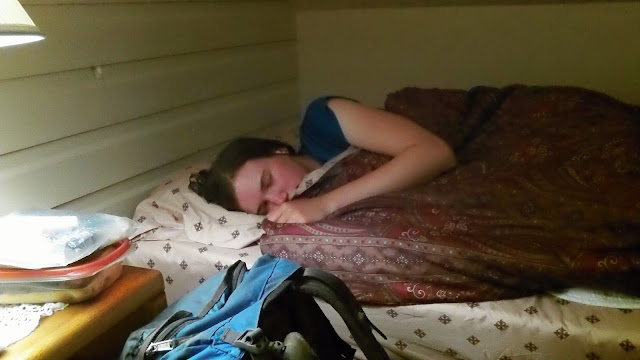