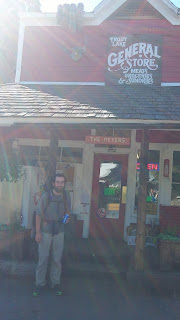 We were in no big hurry to leave Trout Lake the next morning, deciding to take advantage of the shelter over our heads as long as we could. Still, we weren’t used to sleeping in climate control— we had sweated all night, even though outside it had frosted.

We ran two loads of laundry, one for our clothes, and one for our sleeping bag in hopes that it would insulate better if it was clean. While we waited, I caught up on my journal, then wrote a group email.

With our clothes and sleeping bag clean, we packed up and headed downstairs. We found Shrek contemplating eating another gallon of ice cream for breakfast, and when we asked him why he didn’t sleep in the room he helped buy, he shrugged and said that he didn’t want to disturb us.

The owner of the store/hostel solemnly warned us that cold weather was here to stay. “You better hurry up and finish the trail, or you’re going to get buried in snow! Last year we got our first blizzard in late September, and several hikers got stranded.”

With that cheery thought, we walked over to the road to attempt a hitch back. The sky was clear and blue and sunny, so perfect that my heart aches with the memory. As with Sierra City, I knew that I had to return here someday, under another another sunny autumn sky.

We were prepared for a long wait for a hitch since we were trying to get to a remote location on a forest road. However, it wasn’t long before a truck pulled up and a guy named Dave asked us if we were going back to the PCT. We hopped in and learned that he was a former forest service worker. He was just headed to his house a little up the highway, but he said that if we didn’t mind waiting around a minute while he unloaded stuff, he could take us all the way to the trailhead.

We rode with him up the highway, then onto a dirt driveway that wound a long way into a farm. A pack of tail-wagging dogs bounded up as we approached, barking happily, and nearby we saw a pasture with goats and a massive garden. When he unloaded his supplies, we hopped back in and he drove, twenty minutes out of his way, to take us back to the trail. We told him about our dream to buy a house and some land someday, and he told us how much he loved farming and this part of the country. Washington, and especially Trout Lake, was a one-of-a-kind place, and he would never want to live anywhere else.

He dropped us at the trailhead and we waved goodbye, happy that he’d been willing to give us a ride. Then we turned and hiked into the dense pine woods. 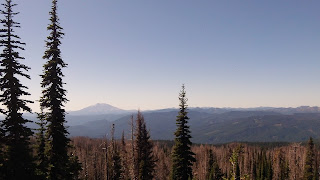 We slogged through the miles, passing through a dry forest, a burned area, and a lava-spattered alpine wood near the base of Mount Adams. In the distance we could see Mount Rainier, its glaciated peak looming impressively. I had first seen Rainier when I was 19— it was the first snow-capped mountain I ever saw, and made a jaw-dropping impression. Now I smiled to see Rainier again in all its glory.

As we hiked, my limbs aching and my feet sore, I thought about what the woman in Trout Lake had said about winter coming. In my diary I wrote, “Winter seems like a pack of ravening wolves that we’re racing to the border.” Despite the mild weather and blue skies, I felt demoralized. We had already been cold a lot in Washington, and if it was only going to get colder… and rainier… how would I hold up? Would we finish the trail on a miserable note, soaked to the skin with cold rain? 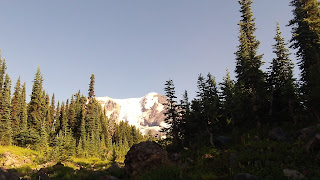 Since we were hiking through an alpine area covered in delicate meadows, good camping was scarce. At last we came to a shelf of land, where a clear stream meandered off the shelf in a beautiful waterfall. Below, near the base of the waterfall, we saw several established campsites. We zigzagged on the trail through a meadow, then followed a path to the site, hopping over a narrow moat of water. We had this little island, with the comfortable rushing of the waterfall, all to ourselves.

It was still pretty early, so we had a relaxed evening, having no need to rush through camp chores. We ate dinner, set up camp, sorted our food, read a bit, and then settled in for the night. Despite the nervousness about winter in the back of my head, I felt relaxed, and fell asleep to the comforting white noise of the waterfall.