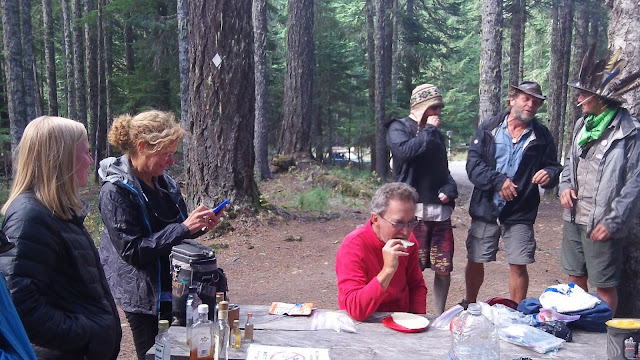 We woke up late again today— we really needed to get out of that habit! The air around us was still cold, with the sun not yet over the steep mountains, so we put on all our layers and packed up in a hurry. I was deeply grateful to have a new coat and hat, courtesy of Gary: the coat was fleece instead of my thin polyester jacket, and the hat was wool. I was still freezing, but I felt much better prepared to take on Washington now.

We started hiking in a cold fog, and soon the trail began to go up and down a lot, though it steadily headed upward through the ghostly pine forest. A chill breeze whipped around us as we hiked, and every once in a while a cold sun peeked through the billowing clouds. It didn’t rain on us, but I was freezing, especially in my hands, even when we were hiking full-speed up steep hills. I felt discouraged— if all of Washington was going to be like this, plus rain, it was going to be really hard. But it wasn’t like we could give up now.

Even Zach was cold, a rarity for him. We theorized that his metabolism had slowed down while we were on trail— on the plus side, it made it harder for him to starve to death, on the minus side, it made him shiver in weather like this.

Puffing with the cold, Zach said, “You know what we really need right now?”

I laughed. “That sounds good.” 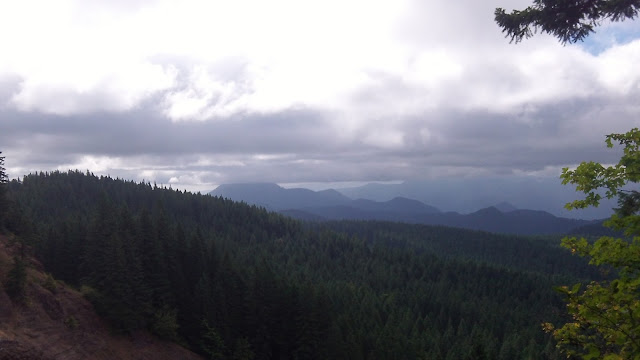 Zach listened to the podcast Snap Judgements, then spent some time telling me about the stories. All the while, we hiked further up into the mountains, the freezing wind biting our extremities as splatters of sunlight and mist fell down on us.

Near midday, we reached a road crossing that had a nice camping area, complete with picnic tables and an outhouse. A weekend hiker was sitting at the table, and we chatted with him a bit. Then, never one to pass up convenient bathrooms, I stepped inside the outhouse.

While inside, I heard a squealing of tires, and then a commotion of a large amount of people, dominated by one jubilant male voice. Confused, I stepped outside, and saw that a gaggle of hikers had just hopped out of a car. In the middle of them, wearing a cowboy hat over his grizzled curly hair, stood a blue-eyed man. “Hi there,” he said, “I’m Legend!”

I looked around at the hikers— there was Trinket and Lobby, who we greeted enthusiastically, along with several others I didn’t recognize and some I vaguely did, including a young man named Apache who kept a bouquet of feathers stuck through his hiking hat. Legend grabbed Apache and dragged him over to the table, sticking a padded cooler in front of him. “All right, just like I told you,” Legend said. 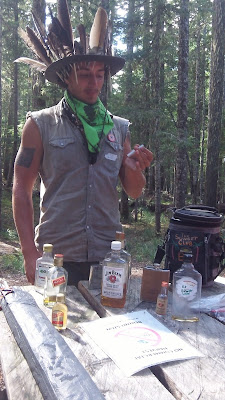 Apache opened the cooler and pulled out several mostly-empty bottles of… you guessed it… whiskey! Apache began reading off the brand labels while Legend chided him for not being an enthusiastic enough bartender. Then Apache asked what we wanted, and poured us tiny shots in the bottle caps while we all laughed and giggled. I knocked back one and savored the warm feeling in my throat.

Legend also set up a camp stove, tore open a couple packets of Knorr pasta sides, and began cooking them. Looking around with the group with a twinkle in his eye, he said, “What is there not enough of on trail?”

“Fun!” he corrected. “There’s not enough fun. So it’s my job to go around and make sure that everyone has fun!”

We learned that he had picked up this group of hikers at various points south of here, then was driving them up to this point so they could hike southbound for a while. The “PCT Days” festival was happening in Cascade Locks in a couple days, and everyone who wanted to go but was ahead of schedule accepted his ride. After PCT Days were over, Legend would drop them back here and they’d continue their northbound hike.

“Who wants pasta?” Legend asked, and we all went scrambling for our bowls. I ate the steaming pasta, which was bland, but hey, it was hot food. Then Legend grabbed a couple people and dragged them next to him. “And now, we’re gonna sing a song,” he said. “A one, a two, a three…”

Then he burst into the Dr. Hook & the Medicine Show song “Cover of the Rollin’ Stone.” He couldn’t sing to save his life, which made it even more awesome. During the verses, he pointed out different people in the group, identifying them with people in the song.

We got a lot of little teenaged blue-eyed groupies,
Who do anything we say
We got a genuine Indian guru
Who’s teaching us a better way
We got all the friends that money can buy
So we never have to be alone
And we keep gettin’ richer, but we can’t get our picture
On the cover of the Rollin’ Stone!

On the chorus, he had us hold the base note while he sang the lyrics, and by the end of the song we were all giggling so hard you’d think that the whiskey shots were bigger than a teaspoon each.

At last Legend packed up the food, and all the hikers prepared to hike out, most of them south, us north. We said a final goodbye to Trinket and Lobby, wishing each other luck. Then we waved goodbye to Legend, thinking that it was the last we’d see of him (we were mistaken).

We continued hiking, up a hill and into the wilderness, which suddenly seemed very empty. We ran into a few southbound hikers, who assured us that Washington was flipping gorgeous, especially the Goat Rocks, which we’d be hiking through in a few days. Both of them said roughly the same thing: “I hope you guys aren’t afraid of heights!”

Now we were hiking with the names Goat Rocks and Knife’s Edge floating around in our heads, neither of which sounded very fun to our fear of heights. This section was still a few days out, so we had plenty of time to worry.

We continued to slog up long hills, and at last decided to camp near Blue Lake, which was one of many lakes in the area. We got a fine campsite on flat ground. I had to commute down to the lake to gather water, edging as far out on the sand as I dared to dip our bottle in the frigid water. It was looking to be a freezing night as well, and I shivered as I filtered the water, squeezing the bottle with hands that felt like chunks of ice.

Zach made a pot of chili for dinner, and we savored each bite, now very glad for hot food. We crawled into our tent right as it was getting dark, hoping for an early start tomorrow. All of Washington lay before us, and we didn’t want to lose momentum. Sealing the sleeping bag over our heads to keep out the chill, we fell asleep.