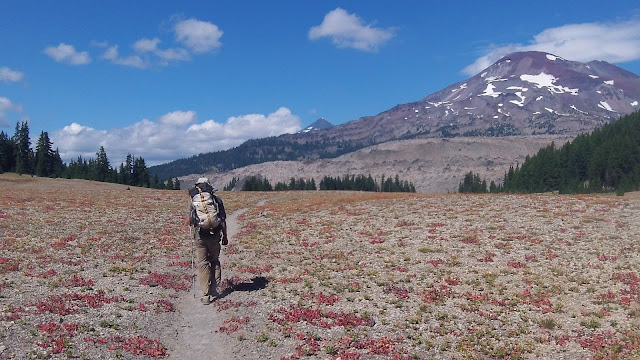 The next morning, I woke up crying in pain. This was the first time this had happened on trail, and I began crying harder because I was crying in pain. Zach groaned and shoved his head under the covers. It wasn’t a very promising start to the day. 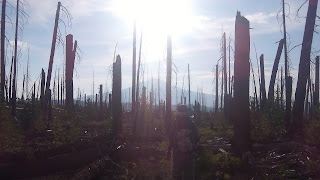 We decided to leave our tent set up and slackpack down the mountain to Elk Lake Resort. It was a two-mile detour, but we needed fuel so we could continue cooking our meals. Zach took a lightened backpack with our water bottles, and I took a trekking pole and hobbled after him. My feet still hurt so badly!

The trip down the mountain was mostly amongst burned and blackened trees with a blazing sun overhead. At last we descended into live trees, and found our way across roads and through parking lots to the resort. The lake was huge and blue and beautiful, with a lot of tourists out in boats. Stephen, a hiker we’d met at Crater Lake, gave us his half-empty fuel canister for free. We wandered around the dark and jumbled camp store, bought a Pepsi from a surly employee, and high-tailed it out of there.

It was a long slog back up the mountain, but the trek actually made my legs and joints feel better— walking on a slope instead of flat ground helped break the muscles out of their monotony. I was feeling distinctly more human when we reached our campsite and began breaking down camp.

As we were taking it down, a middle-aged man walked up on the trail and said hello. He looked very chipper, and had a large backpack and heavy hiking boots, so it was easy to identify him as a short-term hiker. We began chatting with him, and learned that he was hoping to thru-hike sometime in the next couple years, and was “testing out” the trail by hiking a 60-mile section.

“Some friends and I are taking six days to hike this section,” he beamed. “We’ve been doing almost ten miles a day.”

Although that’s not much by thru-hiker standards, considering that most middle-aged people can’t hike a mile, we congratulated him sincerely. A bit more talking revealed that he was a huge fan of Wild— possibly enough to be classified as a fangirl. I’m surprised he didn’t have an “I Heart Cheryl Strayed” t-shirt.

“I was trying to decide which trail to hike, the Appalachian or the PCT,” he said. “So I hiked about twenty miles of the Appalachian, and now I’m hiking here. I’ll tell you what, the PCT is way easier!”

I shifted from foot to raw, aching foot. “That’s what most people say.”

“But the PCT, the PCT is great! It’s so flat and beautiful and easy! I’m definitely going to hike this, just like Cheryl Strayed!”

“Well,” Zach said gently, “this is actually the easiest section we’ve come across on the trail. The desert is challenging because of lack of water, and the High Sierra has a lot of snow.” 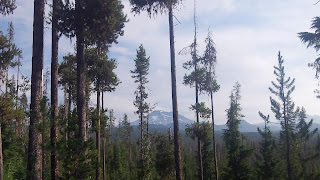 “Oh, well, if the High Sierra has snow, I’ll just skip it, just like Cheryl Strayed did. No sense in being dangerous.”

Zach and I nodded politely.

At that moment, a few other middle-aged people trekked up, again all looking very chipper. They were going down to the resort to get burgers and spend the night before going on. The Wild fangirl grinned and waved goodbye to us, and they all headed down the mountainside.

Zach and I were left alone. I felt torn between feeling vaguely miffed/defensive and thinking that the guy was the most adorable person I’d ever seen.

On we hiked, into a burned area of scorched trees. We walked in silence for a bit. Then I said, “The PCT is hard.” 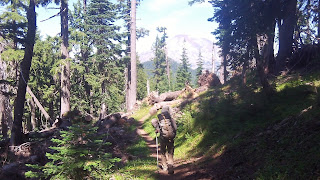 “He just thinks it’s easy because he’s only doing a small section. An easy section. The easiest section yet!”

“Everyone talks about how hard the Appalachian Trail is. Well, the PCT is hard, too!”

My train of thought was derailing as I felt my defensiveness mounting. “I mean, even if you were section-hiking, you’d have no idea how hard it is. It’s not like any individual section is that hard. Not even in the High Sierra, really. The thing with the PCT is that it just keeps going— and going— and going! You reach a thousand miles and you’re not even halfway there. After a while, you start running a calorie deficit and your body just starts eating itself. And your joints just can’t recover from the miles and miles and miles. And especially when you’re like us, when you don’t have any money and can’t afford a shower or a burger in every town— it really wears on you. This is hard!” I ended in almost a shout, feeling my face grow red. 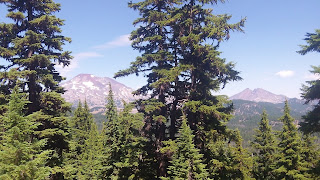 Zach nodded. After a pause, he said, “The way I think about it, it’s like having a baby. Grandparents and friends play with the kids, but then they get a break. As a parent, you don’t get a break. You just have to keep on taking care of the baby, month after month after month. A lot of the time you feel frustrated or upset or in despair, but you keep taking care of the baby because you have to. And it’s hard to explain to someone who’s never had kids why taking care of a baby is so much work, because on the surface it seems pretty easy. Even someone babysitting the kid for a week wouldn’t understand. But even though you’re tired all the time, and upset, and sleep-deprived— if someone asks you if you’re glad you had the baby, you say yes. Because you are.”

We hiked in silence for a while.

The trail soon led us out of the trees into a wide plain, covered in sandy soil dotted with clumps of grass and red-leafed ground cover. The plain swept in front of us, marked with the occasional fir, before heaving upward into a huge, dramatic rounded mountain peak streaked with snow. Beyond it, we saw the sharp peak of another mountain, with billowing clouds around. 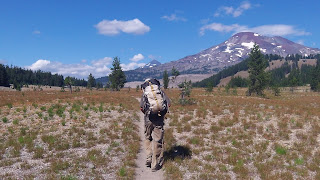 “The Three Sisters!” Zach said, excitement in his voice. He recognized these mountains, since we were near Bend, Oregon, where he had often visited. We were looking at the South Sister and Middle Sister, the beginning of a massively impressive chain of snowy peaks that ran from here to the border of Washington. The Cascades are my favorite mountain range, and I was happy to reach the beginning of their most dramatic peaks.

We hiked in a mild sun, with sandy red-covered plains stretching out around us. There were huge tumbles of rock, sloping hills, alpine meadows, and always the two Sisters on our right. The trail wriggled its way over the huge plain, so it was easy to see where we were going and where we’d been. 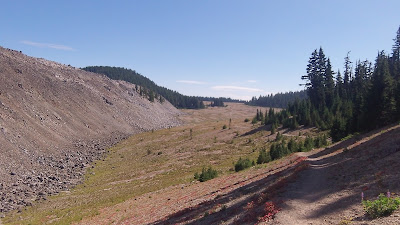 We paused to draw water from a pleasant little stream— a welcome change from the ponds where water was so hard to gather! As we sat, chatting briefly with some other hikers, I felt happy to be back in an alpine environment. I began to realize that I had actually quite liked the Sierra, had it not been for being terrified and starved the whole time. Seeing some Sierra-like landscape today made me happy.

From here, we hiked on into steadily more beautiful landscape. The South Sister looked purple. We passed into grassy fields full of wildflowers with a range of fir-covered hills on all sides. The valley was marked with meandering streams that ran over beds of red pumice. Even though my feet were throbbing again by this point, I was captivated by the beauty all around— I thought it was one of the most beautiful parts of trail yet. 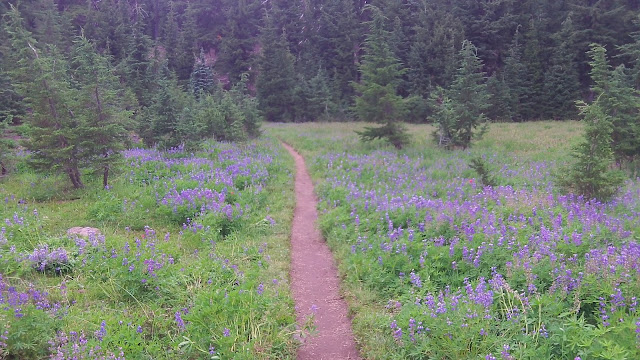 Clouds gathered overhead, so we decided to camp near a rushing gray stream (the grayness was caused by glacial melt), where several hikers were already camped. We found a flat spot surrounded by bushes, and cooked mashed potatoes with tomato sauce and summer sausage. After eating and washing up, we settled into the tent and read The Silmarillion. My legs were still aching, but the pain had mostly abated. Before long, we were both out.