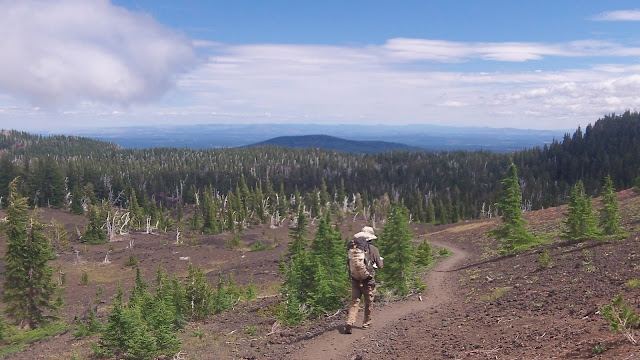 We woke up the next morning to find that an “Oregon rain,” as I call it, was falling— there was nothing resembling drops, but a fine mist of water floated down from the sky, leaving tiny beads of water on the tent fly. Zach and I packed up in the gray morning.

I was feeling chipper, because for the first time in days, my feet weren’t hurting that badly. However, Zach was in pain and being terse, and after a bit of walking his mood rubbed off on me and I began feeling grumpy too.

Soon the sky cleared, and we wound our way through a volcanic landscape covered in trees. We passed a waterfall called Obsidian Falls, and stopped for a snack at a nearby stream. It was easy to see how the falls got their name— the bank was riddled with shards of black and gray obsidian, gleaming in the muted sunlight. 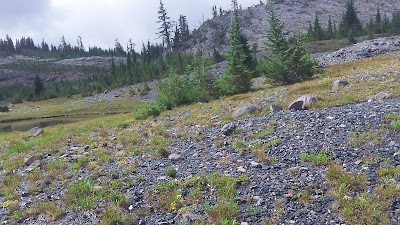 The Three Sisters were still in view, though often obscured by clouds, and today we saw the North Sister in addition to the other two. They were deep purple, painted in gleaming snow.

Our walking that day was still more of a plodding, but the landscape soon became interesting. We walked into a mist, where the sun glowed faintly from above, while solid-looking wisps and tatters of fog hung around us. Soon we left the live trees behind and entered into a wonderland of volcanic rock— hills and peaks of rough pumice in all directions, broken only by stretches of dust, white tree skeletons, and the occasional live fir. Fog drifted around us as we struggled over the uneven trail, coiling around us and giving the landscape a thoroughly eerie feeling.

Looking around, I asked, “Are you sure we didn’t take a wrong turn to Mordor?” 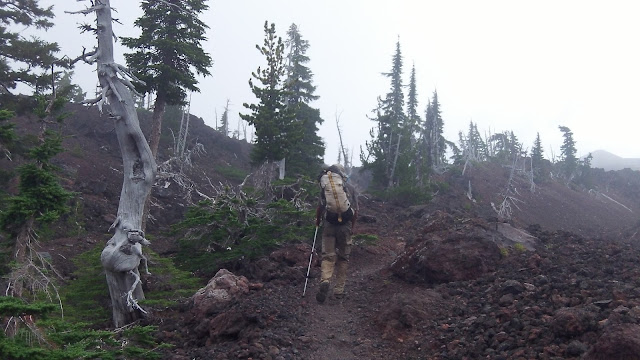 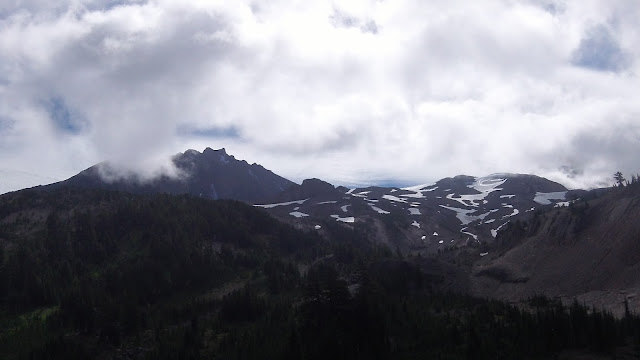 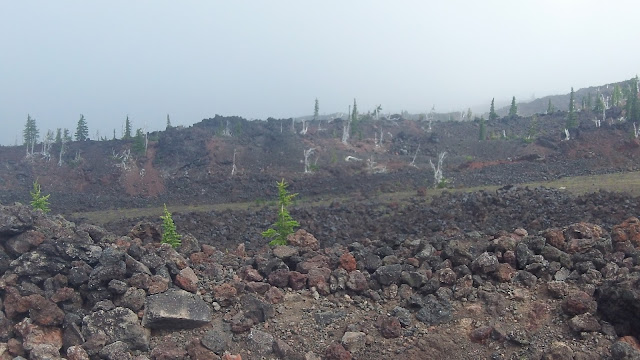 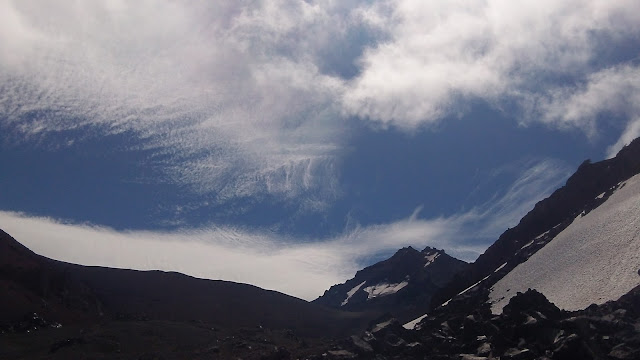 We were climbing over the shoulders of some volcanic cones, and the uneven up-and-down trail after so many days of perfectly flat smooth trail was difficult. However, after that day, my feet never hurt again the way they did in central Oregon. Rough lava rock, while tiring and inconvenient, was better for my feet than a smooth trail! 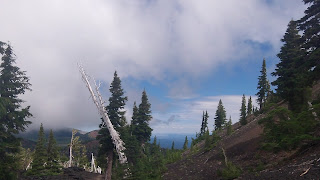 At last we left the lava behind and ate lunch in a circle of pines. Then we plodded on, both feeling tired and dogged. We met some nice day hikers who gave us string cheese, ginger snaps, and celery, which brightened my mood considerably.

At some point during the day, we saw the next series of mountains in the distance: Mount Washington, Three-Fingered Jack, and Mount Jefferson, all in a row. Mount Hood was still obscured from sight, but it was really cool to see where we were headed, and incredible to think that we’d be passing these mountains in just a few days. This was what I’d expected the Sierra to be like: being able to see mountains far away and know that you were going to them. Unlike the Sierra’s high walls of rock and maze-like paths, Oregon was very open, the trail cutting a leisurely path between and beside this great string of peaks. 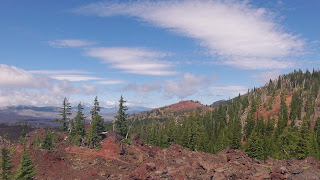 We ate supper by a little pond, trying to stay motivated to keep hiking. As we ate, a new day-hiking couple walked up. “Oh, hi,” the husband said. “Are you guys hiking the PCT?”

“That’s so amazing!” the wife said. The husband promptly pulled out a large camera and took a photo of us. He, like so many others before him, didn’t even think to ask our permission.

We mentioned that we were headed to Timothy Lake to take a few days off with Zach’s dad and sister. The husband asked, “Oh, are you planning to get there tonight?”
We were currently at mile 1988, and Timothy Lake is at mile 2082. 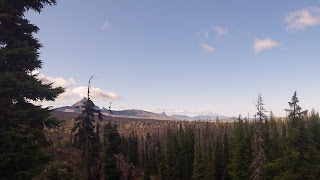 We stared, dumbfounded, for a second, but before we could answer, he said, “Wait, no, you must be getting there tomorrow. Or maybe the day after? Yeah, the day after.”

“Actually,” Zach said, “we’re planning to get there about five days from now.”

“Five days?! You can drive there in an hour!” 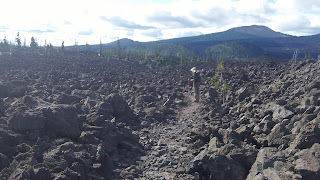 “Wow,” the husband said, clearly impressed. Then he took another photo of us, gave us a business card for his photography business, and they said goodbye and hiked on. Zach and I chuckled to ourselves— whenever people tried to look smart about hiking, they just ended up showing their ignorance.

Now we hiked on, and soon the trail spat us out onto another lava field. In the late golden light, we could see a massive undulating stretch of grayish lava rock. Peaks and piles of boulders stuck out here and there, huge blankets of firs covered the folds and valleys, and we saw the jagged tip of Three-Fingered Jack over the top of the rising land on the horizon.

Soon, stumbling along over lava rock (I was really looking forward to getting new, thicker shoes at our next resupply!), we saw something else— a familiar mural-painted trailer parked down on the shoulder of an empty Highway 242. Pop-Up Trail Angels! 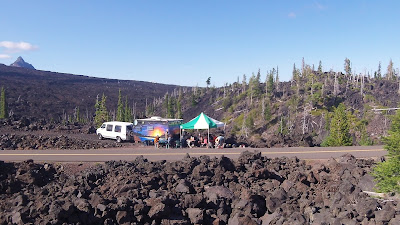 With new energy we hurried down to the road and crossed over, joining a huge group of hikers beneath the pavilion. There were several I vaguely recognized from the desert, but didn’t know their names. Most were in high spirits, having just returned from a couple days of chugging Oregon microbrews in Bend. Chef was serving up chicken burritos. Despite having had dinner less than an hour ago, Zach and I gobbled up the food and drank Crystal Lite like there was no tomorrow. We couldn’t squelch our survival instincts about food! 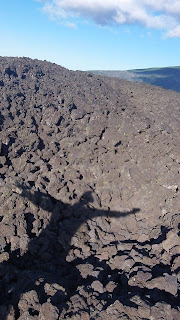 This was the last time we saw the Pop-Up Trail Angels, but we will always be grateful to them for giving us much-needed calories and morale boost at some of our lowest times on trail.

We hung out for nearly an hour, then decided that we needed to get our rears in gear if we wanted to get out of the lava field and into a good camping area before the sun went down.

Now we started a toilsome but actually quite pleasant trudge across the lava, slipping on the rocks, following the path of crushed stones in a winding trail into the plain. When Zach took a bathroom break in the nearby woods, I sat on a coarse rock, then dropped my pack and strolled around without it, marveling at how light I felt without it. I began singing songs from Elton John’s Aida and the Lord of the Rings musical. My vocal chords were rusty— it had been ages since I’d sung aloud like that.

Eventually Zach returned, and we hiked on, both in better spirits than we’d been all day. A sharp volcanic cone rose up before us, while the sun poured deep golden light over everything— it really did look like Mordor, in a strange and fascinating way! 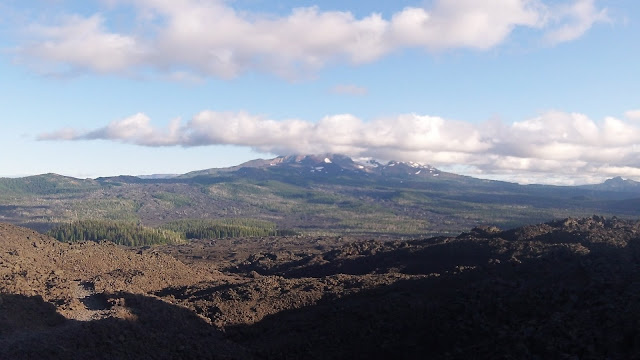 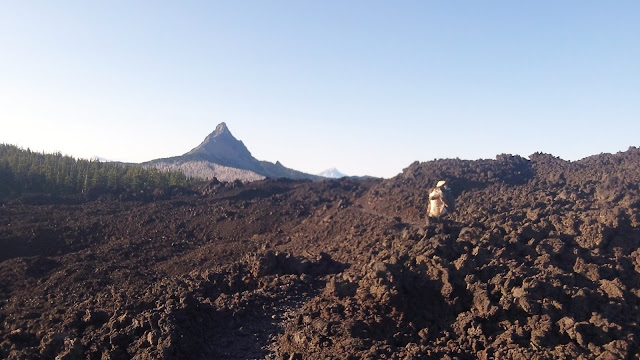 We hiked for what seemed like ages, racing the sun. We passed up a couple good camp spots, but finally settled on a sandy stretch in the lee of a volcanic shelf, with some dead trees around that could conveniently fall on our tent if the weather turned sour. Still, the firm sand was a great place to set up camp, and the weather was clear, so we left the rain fly off.

I slept shallowly that night, for whatever reason. But I didn’t mind, because the night was pleasantly cool, and every time I woke up, I looked up at a tapestry of stars above my head. The Milky Way glowed intensely, and the dead trees rattled in the breeze. I got up to go to the bathroom in the middle of the night, and looked at the wide black star-speckled world all around.

For this whole trip, I had felt homeless— I never thought of our tent as being a home or even a house. But now, staring up at the stars above and the eerie volcanic landscape beneath, I suddenly realized that I was at home.

The words of a song by Gaelic Storm passed through my head:

From the north and the south to the east and the west
Where the sky is our roof and the road is our rest,
No one to say yes, no one to say no,
Run free with the rambling gypsies, oh!

Then, with a smile, I ducked back into the tent and slipped into a fitful, but somehow restful, sleep.