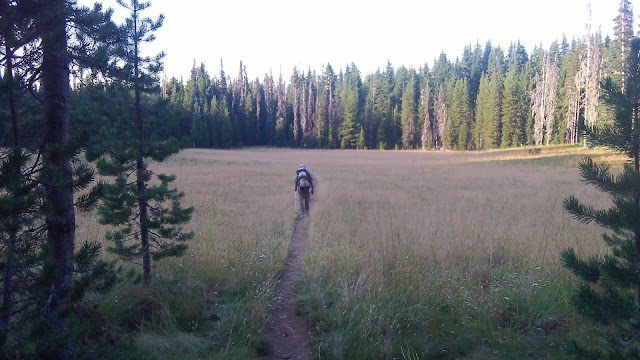 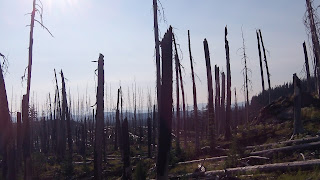 I woke up early the next morning, and laid in bed for a while, staring at the gray sky above. Clouds had rolled in, but they were hazy, rather than rain-threatening. Zach was still sleeping soundly, so I quietly unzipped the tent fly and wrestled on my trail runners.

When the soles of my feet hit the bottom of my shoes, I cringed in pain. When I stood up, a thousand needles of pain shot up my feet, and I nearly fell over. With a muffled groan, I limped to the nearest log and sat down, pulling my feet out of my shoes and yanking off my socks. I stared grimly at my feet. Not only were they aching, the tendons feeling like I had strained them, but they were bright red. The trail had been pretty dusty lately (made worse by the heavy equestrian use), with a dust so fine that shoes were no guard against it. Dust rubbing against my sweaty feet all day had worn my skin down to raw flesh. 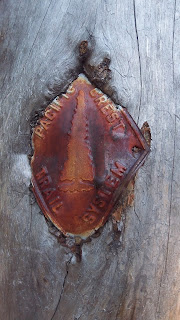 Gingerly, I dumped some water on a gray bandana and gently wiped my feet, wincing as the cloth touched the raw skin. This bandana had been with me on many adventures, from Seattle to the Everglades to Bavaria— my best friend Amy had given it to me, and I thought of her every time I used it. It was well-worn now, especially with the abuse I had put it through this trip. “Foot-cleaning cloth” was just one of its many uses.

After I cleaned my feet, I set the bandana to dry on the log, then gingerly pulled on a “clean” pair of socks (none of our socks ever got really clean, even if I laundered them). I eased my feet into my shoes, grimacing in pain. It was not going to be fun to walk today.

Soon Zach woke up, and we packed all our stuff and limped back to the trail. I have little memory of that day— my diary mumbles, “It’s hard to press forward. We take turns listening to stuff [on Zach’s phone].” My photos show a burn area, a vintage PCT trail marker, a couple ponds, and us walking through a huge field of golden grass which reminded me of a farm I’d volunteered on in Washington several years ago.

We were hoping to make it to Elk Lake Resort before dark so we could pick up a fuel canister— ours was almost out. I kept this goal in mind, exerting will to put one foot in front of the other. Today just felt like a death march. 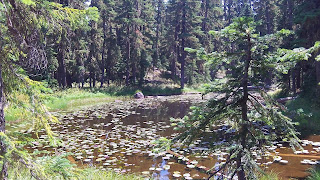 After several hours of limping along, cringing with each step, it became apparent that our goal for the day wasn’t going to happen. Still, we managed to get within a mile of the resort, where a vast burn area began. We decided we might as well camp here, at the edge of the live trees. I felt disappointed that we hadn’t made it further.

Looking back, it blows my mind what kind of mileage we were doing in this section. The trail was smooth and nearly perfectly flat, so we sailed through the miles, even when we felt like we were slogging. On this day, not even reaching our intended destination, we still did over 27 miles!

It’s no wonder that, doing this many miles a day on perfectly-flat ground, my feet were getting worn down into the dust. As we set up camp, I began crying because they hurt so much. My tendons were worn and strained, my skin raw, my muscles tense, my flesh bruised. Zach wasn’t any better off, though— he just complained less. In silence he fixed a pot of chili, and then he went off to filter water while I set up camp.

As I did so, I realized something. My gray bandana, the cherished gift and accessory of my favorite trips, was gone.

“No,” I murmured, shuffling through the packs. “No, no, no…” I slowed down in despair, remembering that I had left it hanging on a log to dry at Charlton Lake, 27 and a half miles back. 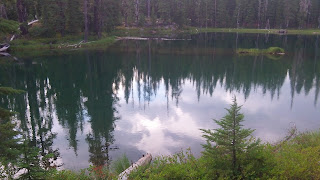 Zach returned, and found me sitting on the ground with tears running down my face. He looked at me, expressionless. “What is it?”

I stood up shakily, and through tears, barely managed to get out, “I lost the bandana that Amy gave me.”

Zach’s stony expression broke, and he began to cry.

I hurled myself into his arms and began sobbing. I was so sick of hiking, so sick of blading through miles in a seemingly meaningless march, so sick of my feet hurting, so sick of being away from family and friends. Zach and I crawled into the tent, utterly pitiful, and tried to go to sleep. As I laid down, I felt the pain creeping up my tendons and joints in my legs, all the way to my hips and into my back. At last, the exhaustion overcame the pain, and I fell asleep. Still, my body was hurting so badly that I woke up several times in the night, sobbing.