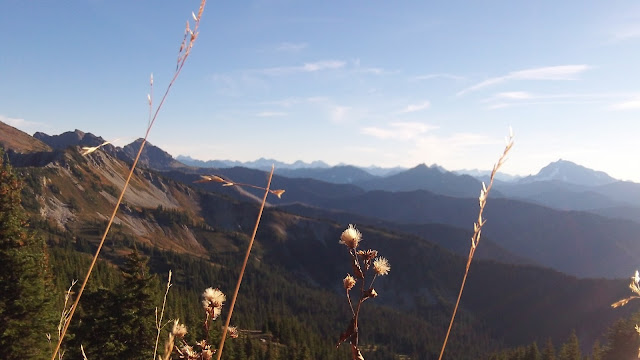 We had agreed the night before that we wanted to get within easy striking distance of the border tomorrow (what a bizarre thought!), so we were hoping to make 24 miles today. This was the farthest we’d hiked in a while, so we were determined to get an early start. Early that morning I threw my stuff in my backpack and hurtled down the trail toward the nearest water, a spring about half a mile down the trail. Zach stayed behind to pack up the tent, while I filtered a day’s worth of water at the spring. Water was scarce in these desert-like mountaintops, and we wanted to be prepared. 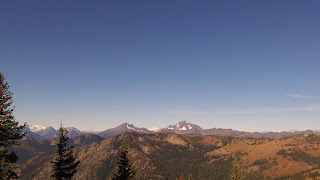 Despite our early start, most of our camping mates were up and at ‘em at the same time or before us. We all bottlenecked at the stream, and chatted with each other. By the time Zach rejoined me, I had finished filtering the water, and we set off together into a wild open alpine landscape.

There was a maze of trails in this section, little brown lines zigzagging through the alpine turf, but the PCT was always well-marked with the little icons that we had come to know so well. Most everyone passed us, hiking furiously. We were all simultaneously eager to get to the border and wanting to savor every minute. 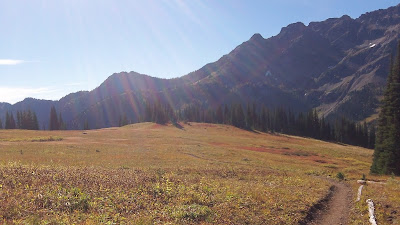 We paused at a spring seeping out of the side of the mountain, taking a break in the shade of some pine trees. We couldn’t believe that Washington’s weather had been so nice for us. It was another blue-skied day that revealed all the awesome glory around us: the jagged arid mountains, the groves of trees, the wooded slopes and wide curved valleys. We glimpsed glacier-peaked mountains and autumn-colored meadows in the distance.

When we resumed walking, rolling over the elevation loss and gain without breaking a sweat, I felt in awe of my body. I was certainly not healthy— I knew that eating mashed potatoes and Snickers for five months made sure of that— but I was strong. My legs seemed like iron, and when I touched the flexing muscles, they felt like it too. My back was straight and strong, my lean arms could hoist my pack with no trouble, and my feet pushed off the terrain as if weight didn’t matter anymore. I had rarely been this aware of my body (except when I was in pain) all trail, and I marveled at it, trying to savor this moment forever.

I was so strong. I don’t think I’ll ever feel that strong again. 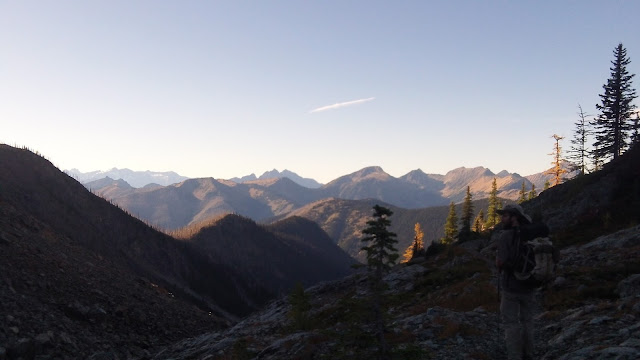 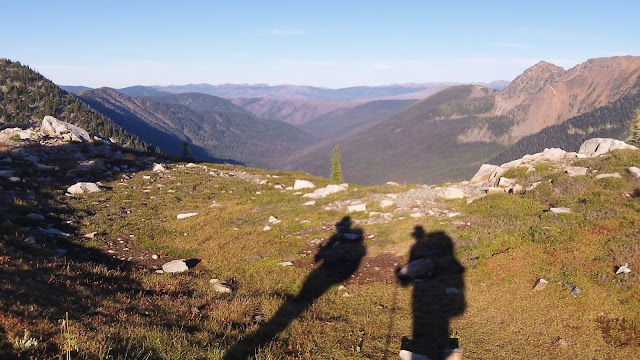 The mountains in this section were so steep and crumbly that they often couldn’t support a trail— I can’t imagine how difficult it must’ve been to blaze a trail through this section. Late afternoon we crossed over a little pass and saw, about a quarter mile away, the trail going over the other shoulder of the same peak. However, a sheer field of scree stood in our way, so we had to switchback all the way down the mountainside, walk across a little valley, and then switchback all the way back up to the other side.

We were headed toward a feature called “Devil’s Stairway,” which sounded scary, but we were hoping to cross it and camp by Hopkins Lake on the other side. That would put us only 6.3 miles from the Canadian border, and only 15 miles from our final destination, Manning Park. This goal kept us moving forward, without taking any breaks. We barreled along a high ridge as the sun sank lower in the sky.

We looked at our maps, and soon saw that we’d be leaving the ridge and plunging into a valley. We agreed that we should take a rest, since this would be our last big scenic vista of the United States.

We plopped down on the trail, since there wasn’t any good place to sit otherwise, and sat with our faces south, the way we’d come. The setting sun had turned the sky to a flaxen yellow, and the only sounds in this silence were our breath and the breeze rattling dry flower stalks in front of me.

I gazed out on this vista: green valley, rows of jagged blue mountains. Beyond that, in my memory, I saw the huckleberry-clad fields, the glaciers of Rainier, the volcanic ridge of the Cascades, the forests, the alpine meadows, the trail angels, the tiny towns, the burned areas, the crags and shelves of Northern California, the black-and-white landscapes of the High Sierra, the rocks and sand and crowds of the desert. I saw in my mind the Southern Terminus, where over five months ago— eons ago, it seemed— Zach and I had stood at the beginning of this trail, completely inexperienced, dreaming an impossible dream to get to Canada.

My eyes focused on the flower stalks in front of me. The flowers had gone to seed, leaving thistledown and dry stems to wave in front of the distant blue crags. 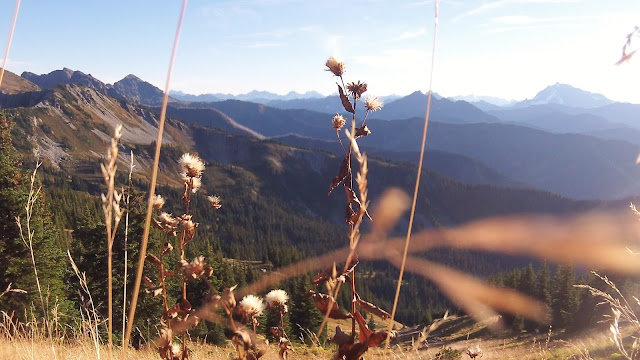 I stared at the seed pods. “It’s autumn,” I said, and it really hit me for the first time. “It was spring when we left, and now it’s autumn.”

Zach just made a noise of acknowledgement. I thought he must still be feeling apathetic— we’d both struggled with it lately. The trail had worn us down. But as I stared at the thistledown and listened to the dry stalks scratching the vast silence, I felt the weight of what we had accomplished pressing on me.

I looked at Zach. When we left Mexico, he was clean-shaven and full-faced, ready to tackle the trail. Now he had a gnarly beard and sunken cheeks and brown skin.

And he was crying.

I lost it. I collapsed on his shoulder and he clutched me in his arms and we looked south at the last real view of the United States, and we both cried. It was the good, clean, overwhelming sort of crying that makes your whole body ache, but your mind feels strangely calm.

We cried for a minute or two, baptizing the moment. Then we sniffed, and wiped our noses on our grimy sleeves, and helped each other to our feet.

We stretched, shouldered our packs, and tightened the straps. Hip belt, shoulder straps, chest strap, load lifters. Just as we’d done a thousand times before. Then we plunged down into the shadow on the other side of the ridge. We left the view behind us, burned into our memories forever.

When we reached the border the next day, we couldn’t conjure any emotion at all— we had used it up.

So, in my memory, that moment on the ridge was, in a powerful way, the actual end of the trail.

We followed the path down the plunging curve of the ridge, and saw behind us to the right a jagged edge of the ridge, marked with layers of arching strata. We realized that this was Devil’s Staircase, nothing to worry about. It was dark in the shadow of the ridge, but Hopkins Lake wasn’t far away.

The trail descended sharply, leading us into a pine wood, and then we took a little spur trail toward the lake, doubling back so that the trail was high above our heads. The lake was placid and silver in the shadow of late day. We found a camp spot near a middle-aged hiker who introduced himself as Me Too. Other than a few lonely tents along the shore, we were alone. We chatted a bit with Me Too: this was his third attempt to hike the trail— he’d had to get off for health reasons twice. “But this is it!” he said.

Zach pointed out, “Even if we break a leg now, the quickest way to rescue is through Canada.”

That was an awesome thought.

Now we were down to the last cooked meal on trail: what should we choose? We at last decided on one of our most decadent meals: mac n’ cheese with chunks of summer sausage. “After all,” I said, “we’ll probably never want to eat camp food ever again.”

We devoured the huge meal, savoring the flavor of our newly-acquired butter, then set up camp with a leisurely air. Probably for the last time. Good thing, too— our zippers were almost completely shot. You can’t blame the brand, though: we had put more wear on this tent in five months than most people do in ten years.

It was a cold night, so we rigged up the rainfly and climbed into the tent, snuggling up the sleeping bag. Zach read half a chapter of The Silmarillion before he got too tired to keep reading. Our emotional energy was spent, and we couldn’t really grasp what was happening. Maybe tomorrow we’d understand better.

We kissed goodnight, rolled over, and plunged into an exhausted sleep.