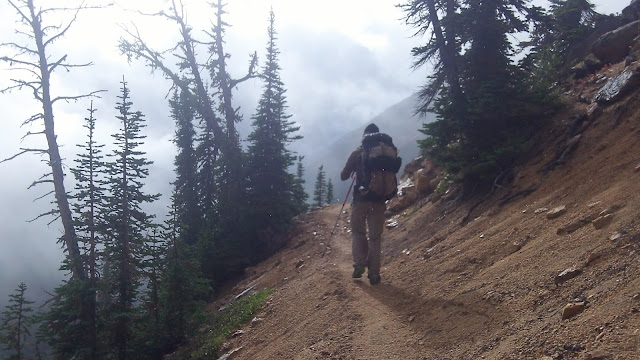 We woke up late that morning, watching a gray light filtering in through the fogged-up windows. It was warm up here in the plywood attic, and I felt a bit groggy from sleeping so deeply.

This morning I was feeling incredibly nostalgic about the trail. This was, for real, our final town stop: it was all wilderness from here to Manning Park. We were almost finished, and it looked like we were going to make it. We were actually going to make it.

And suddenly, briefly, I was sorry the trail was going to end. I wanted to keep hiking forever.

When we clambered down the ladder, we found a chilly world outside. The area was deserted; Legend had left to run 45 and a couple other hikers down to a different part of the trail. He’d said he’d be back by 10:00 to run us up the mountain back to Rainy Pass.

Now only Slim was left, smoking under the pavilion and good-naturedly ogling me as I sat down to eat our morning oatmeal. There was some coffee, still hot, for Zach, and a leftover pancake that I nibbled on.

We had some time to kill, so Zach and I walked on a road between cornfields toward the organic store we’d visited yesterday. We walked through the aisles, resisted the urge to buy expensive gourmet sandwiches, and instead purchased some boxed wine that we would pack out to the border. We wanted something special to celebrate with when we reached Canada.

We walked back toward Ravensong’s. We caught some spotty reception and called Zach’s Grandma Kathy, asking her to pass the word that we were alive and that we were still on time to meet Aunt Rose at Manning Park. 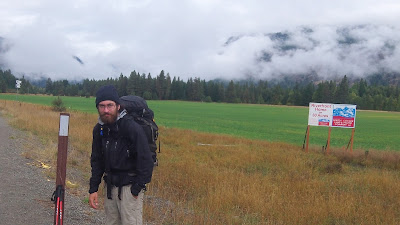 Back at Ravensong’s, all was still deserted except for Slim, who was up a ladder working on the garage. I paced around, having nothing to do, and the dampness of the air crept into me.

Soon I felt like my feet were soggy blocks of ice, and no amount of stamping or pacing could warm them up. I felt irritable, cold, and restless. This was bull! I couldn’t wait to finish the trail! The warm nostalgia evaporated for the moment.

At last, around 11:30, Zach and I decided that Legend wasn’t coming and that we should try to hitch. Without much hope of getting a 22-mile ride, we held out our thumbs. Car after car blazed past. The weather was getting a bit warmer, but I was still so cold that my teeth were chattering.

After nearly an hour, a white Cadillac came screeching up, and we saw Legend, with his girlfriend (Donna, I think) in the passenger seat. “The hikers were late,” he said. “And then there was an avalanche on the way to Hart’s Pass.” He said this casually— avalanches were very common around here. “It took the highway forever to clear it.” Legend now had other errands to run, so he drove back to Ravensong’s, and then Donna returned in the Cadillac to take us up the mountainside.

We chatted with her as she drove. Now that my feet were thawing a little, I faced the day with growing excitement. We were starting Washington Section L today. The last section. 69.5 miles more, and we would be done. It was crazy. 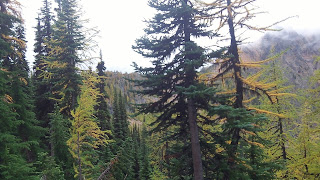 Donna was going to drop us off right at Rainy Pass, but when we passed the parking lot where Zach and I had been picked up the day before, we saw a pavilion set up and steam rising from a grill. Trail magic! Donna dropped us off there and wished us luck.

A posse of hikers were huddled underneath the pavilion around a folding table. We soon learned that the magic was courtesy of “Mr. and Mrs. K2,” the parents of a hiker named K2. We’d seen K2, a girl nearly my height, and her hiking partner, a little redheaded girl named Pippin, at Elk Lake Resort over a month ago, and now here they were again. There was also Lumber, Landfill (the ER nurse), Apache (different than the one we’d met before), String Cheese, Ninja, Angles, and Sloe Gin.

Everyone, including Mr. and Mrs. K2, greeted us warmly, and we went around the introductions, all of us cramming to fit under the pavilion to keep out the whipping wind and rain. Ninja, standing on the edge, got a bucketful of rainwater dumped down his back when a gust of wind unleashed a little monsoon from the top of the tent. 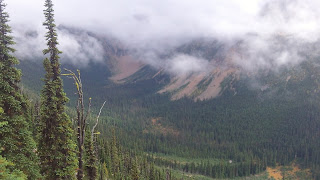 There was a steaming grill where Mr. K2 was making grilled cheese sandwiches, and we accepted one, and then two, and then three. There were cookies and chips to snack on, and there was hot chocolate and Schnapps, which quickly transformed into a mixed drink known as “hot schnacholate,” which tasted delicious and warmed you down to your toes. Still shivering, we clutched the steaming mugs and ate the gooey melted sandwiches, breathing in these treasures of civilization.

This was a group in high spirits, and we laughed and talked and bladed through the food with wild abandon. At last Zach and I decided to go on, and when Mr. K2 offered rides to the proper Rainy Pass trailhead less than two miles away, we gratefully accepted. We had made it this far— why be purist now? Landfill joined us in Mr. K2’s jeep and he drove us there. We crossed the parking lot and found two people we knew at the trailhead: FIG JAM and Mountain Mama. We said hi and chatted with FIG JAM a little bit, but set off hiking because it was still raining and we were already cold again!

Into a rugged and wooded terrain we hiked, gaining elevation. Mushrooms lined the path, big meaty mushrooms that made me hungry for pancakes. The rain slacked, then let off within the hour, though the clouds lingered, and soon my feet were warm for the first time since I woke up, which improved my mood even more. 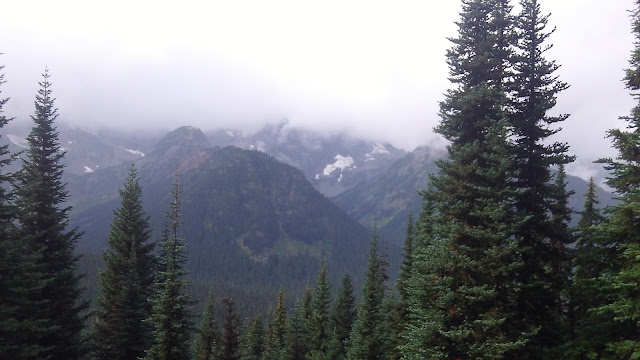 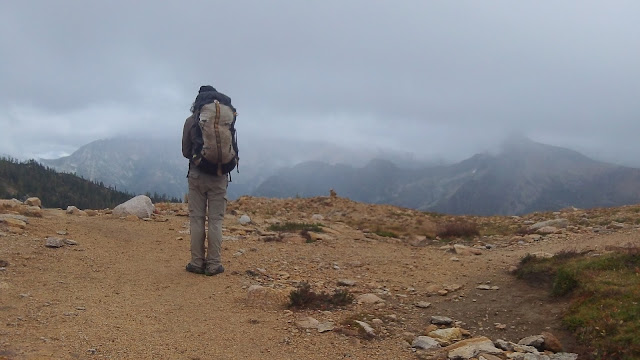 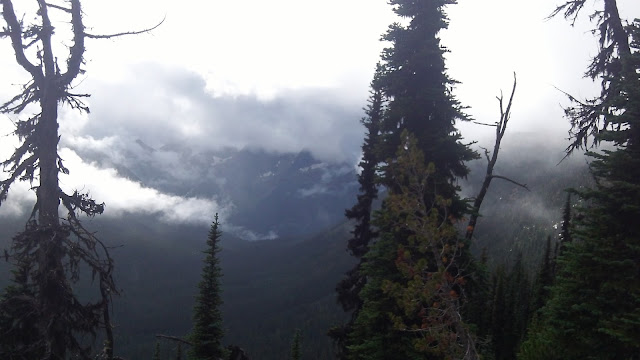 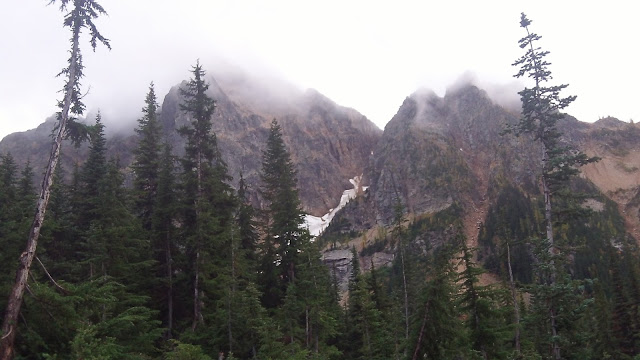 Soon we stepped over some sticks spelling out, “2600.” Our last hundred-mile marker. Sixty-some miles to go. 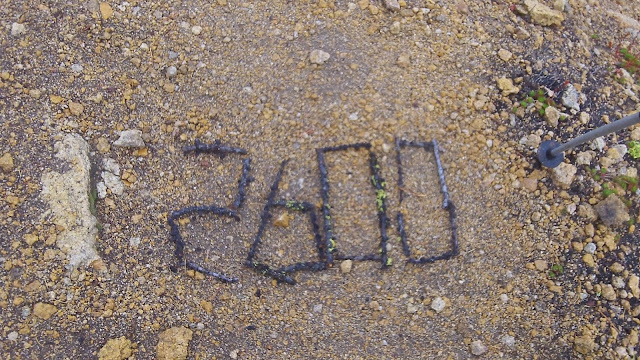 Up and up we hiked, leaving the dense forest behind for a cloud-roofed wonderland of mountains. We hiked through staggering scenery: steep jags clothed in glaciers, verdant valleys, paint-stroke meadows of huckleberry bushes, larches fading to yellow with the autumn, tattered mist rising and falling over the ridges. The world all around was wet and jagged and rocky and surreal, full of alpine meadows and groves of huckleberries and constant twists and turns over these severely-sloping mountains.

We hiked hard, in and out of mist, over meadows and under trees, meeting and re-meeting our friends from trail magic. At last we delved back into woodland, and found a nice camping spot near a creek. Some of our new friends camped across the water from us, and we heard them laughing and talking and building a fire. We thought about going over to say hi, but we were both tired, and I was feeling kind of sick and just wanted to go to sleep.

We crawled into the sleeping bag. My period had just started, to my annoyance, and as I laid there I thought, What a lousy way to finish a trip. But even as I drifted off to sleep, I wasn’t thinking of my discomfort— my mind was drifting over the rugged landscape, awed by its beauty. In the end, I couldn’t wait to see what tomorrow would look like.