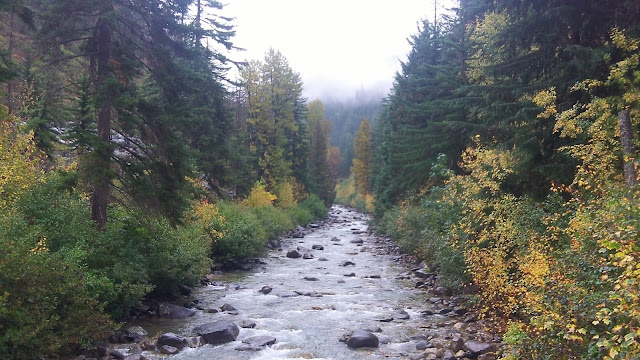 We woke up to a gray morning, with low-lying clouds obscuring the tops of the mountains across Lake Chelan’s silver surface. We had survived the night without a rat running over our faces, although I groaned when I looked at the rat-chewed top pocket on my backpack. Oh well!

Zach’s ankle was feeling well enough to walk, if not 100% recovered, and I was relieved to hear that he agreed we should hike on. We would at least make it a little bit further, and I was feeling optimistic.

We climbed aboard the 8:00 bus back to the PCT (Anne, the woman with long silver braids, was our driver again). Zen Dawg hopped on the bus with us, as well as a ton of other hikers who were headed to the bakery. We stopped there one last time, and Zach and I loaded up on snacks to take with us today.

The bus dropped us at the trailhead, and the three of us stopped to say hi to a ranger and learn the latest weather forecast. Despite the drizzle falling steadily around us, the forecast looked good. No snow, at any rate! We asked the ranger to take a picture of us with Zen Dawg. 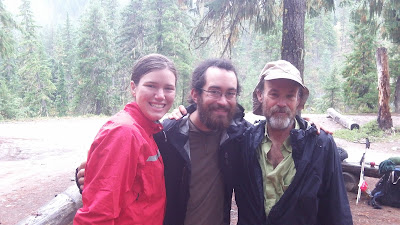 Now we hiked into the drizzle, up some short switchbacks and deeper into North Cascades National Park. We were cold at first, but soon had to stop and de-layer once our blood got moving. We paced Zen Dawg for a while, then pulled ahead and hiked steadily. To our shock, Zach’s ankle didn’t hurt at all!

We hiked in silence through the mist and clouds, around jagged outcroppings of rock and tall conifers and little rain-swollen streams. Sometimes the landscape opened around us to reveal huge mountains rising up, covered in tatters of steam and mist. The bushes were changing colors, adding splashes of yellow and red to the landscape. Before this week I had never even heard of North Cascades National Park, and I decided now that it was severely underrated. 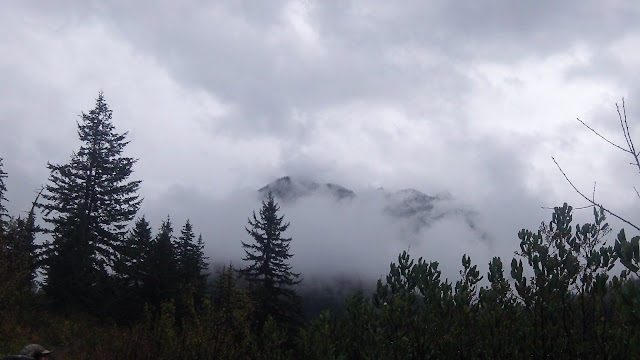 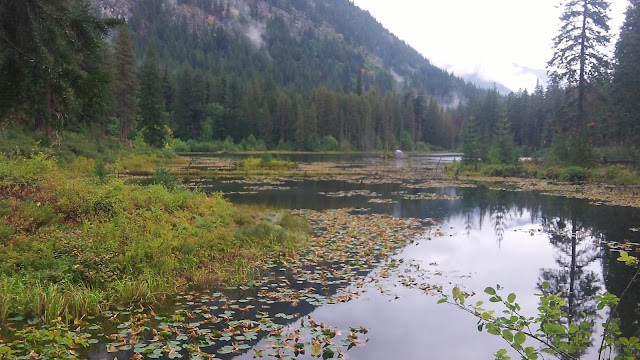 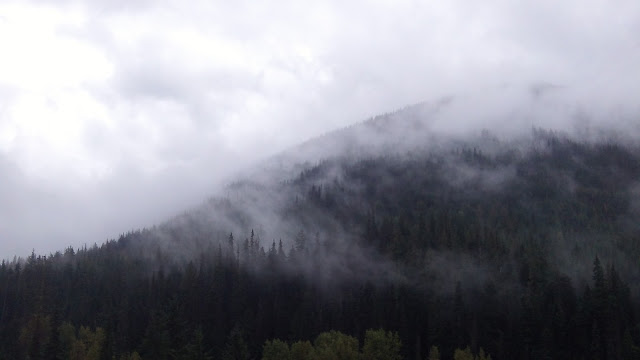 We crossed a little suspension bridge, and then it began to rain in earnest, thundering down between the trees. I pulled out my umbrella as rain streamed down my arms and soaked my legs. Fortunately we were pretty warmed up by now. We took a break under a thick conifer and each ate a cinnamon roll. It’s amazing what a morale boost packing out pastries was! 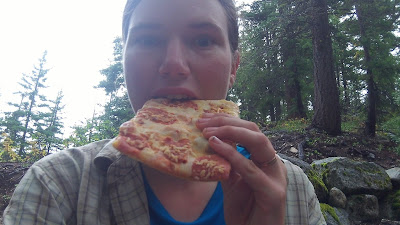 We hiked on in the rain, plodding steadily along. We had heard that there was a trail angel in the town of Mazama, but it was a 22.4-mile-long hitch from a small highway, and we weren’t sure whether we wanted to make the detour. Plus, sleeping under a roof three nights in a row? Gluttonous! 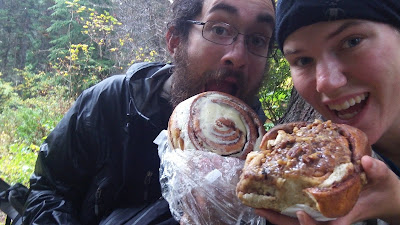 It was late in the afternoon, and we still hadn’t made up our minds. We came up on the highway suddenly through the mist, and saw some outhouses on the opposite side. We decided to take advantage of these in any case.

As had happened in southern Washington, I was inside the outhouse when I heard the screeching of tires and loud honking. What the heck? I thought as I stepped outside.

There, hopping out of his white cadillac, was Legend! We started in recognition as he hopped up on the nearest boulder and began crooning out Cover of the Rolling Stone while two hikers with him waved hello. When he finished the last woefully out-of-tune notes, he announced, “I’m headed to Ravensong’s. You guys need a ride?”

We took this to be a sign, and said, “Yes, please!” We piled into his car, along with the hikers— 45, who we’d met at Hiker Haven, and a guy named Dozen. As Legend sped down the winding mountain roads, we listened to Cover of the Rolling Stone again with Legend singing along. Then he announced that his iPod had a playlist and we could each choose a song from it to listen to. I chose Piano Man by Billy Joel. When it was Legend’s turn again, he played Cover of the Rolling Stone.

“Uh, we just listened to this…” Dozen began.

“It’s my turn! I get to pick!” Legend said with a twinkle in his eye.

We listened to classic rock all the way down into the valley. Here we found the town of Mazama, which was a few buildings bumped up against a cornfield and some woods. There was a permanent sign with an arrow, directing locals to the Avalanche Reporting Station.

We stopped at the general store, which turned out to be a classy Whole Foods-type store with a fine selection of specialty and organic foods. We poked around a bit, then turned and came face-to-face with a long-bearded hiker.

“Yeah! I couldn’t go into Canada so I hiked back to here. I’m staying the night, then hitching out in the morning.”

This was the first person we’d met this year who had completed the trail, and I couldn’t contain my excitement. I gave him a big hug, yelling congrats. He laughed and hugged me back.

Ché looked into the middle distance, looking thoughtful. “I honestly don’t know,” he said. “I’m gonna figure it out as I go.”

Legend called to us from the front of the store. “We’re leaving!”

“Good luck,” we told Ché, and with one last smile at him, we scurried after Legend.

He drove us just a bit down the road, to a little wooded property with a house and a huge garage. This was Ravensong’s place— a trail angel haven in progress. Right now Ravensong offered dry places to sleep in the open-sided garage or in the plywood-covered attic of the garage. We chose the latter, happy to have a warm and dry place to spend the night again! 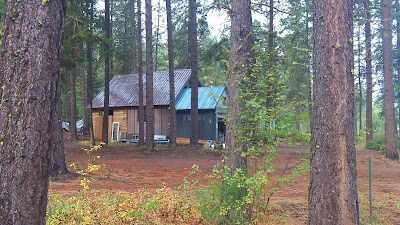 Slim was there, a pudgy construction worker we’d seen at Hiker Haven. He was helping Ravensong build this place, along with some other volunteers who had already finished the trail. We had yet to meet Ravensong, but we soon learned that she was possibly the first woman to solo thru-hike the PCT, back in 1975, on a year so severe that only 12 people completed the trail. Talk about hardcore.

Legend brought out some food from Ravensong’s house and began working on an outdoor grill, shielding from the spattering rain by a little pavilion. We made chicken soft tacos, and we crowded in on a picnic table under the pavilion and ate with abandon.

Legend set up a laptop and announced that it was “movie night.” He proceeded to play us some video journals he’d taken on his 2011 thru-hike. 2011 was a brutal snow year, and most of his videos took place in the snow and depicted him trying to find the trail, drying out his gear, post-holing, or almost falling off severe cliffs. Seeing how steep and crumbly the mountains were around here, I appreciated in a new way why most of the sobos we’d met this year had skipped northern Washington due to snow. I was very glad we were hiking in a low snow year!

As we watched, we were joined by Zen Dawg, who had gotten a hitch from a local. Soon after, a soft-spoken middle aged woman walked up, and we soon learned that this was Ravensong. In the hustle and bustle I didn’t get a chance to talk to her, but I wish I had.

After hanging out for a while, we clambered up the ladder into the plywood loft and set up our bed. The attic was lit with hot incandescent lights on the floor, so we set our wet gear next to them and watched the steam rise.

Rain pattered against the window, soon giving way to a torrent, and I blessed Ravensong for opening up a shelter, and Legend for showing up when he did. Rain is so much nicer when it’s outside and you’re inside! That night I slept more deeply than I ever had before.