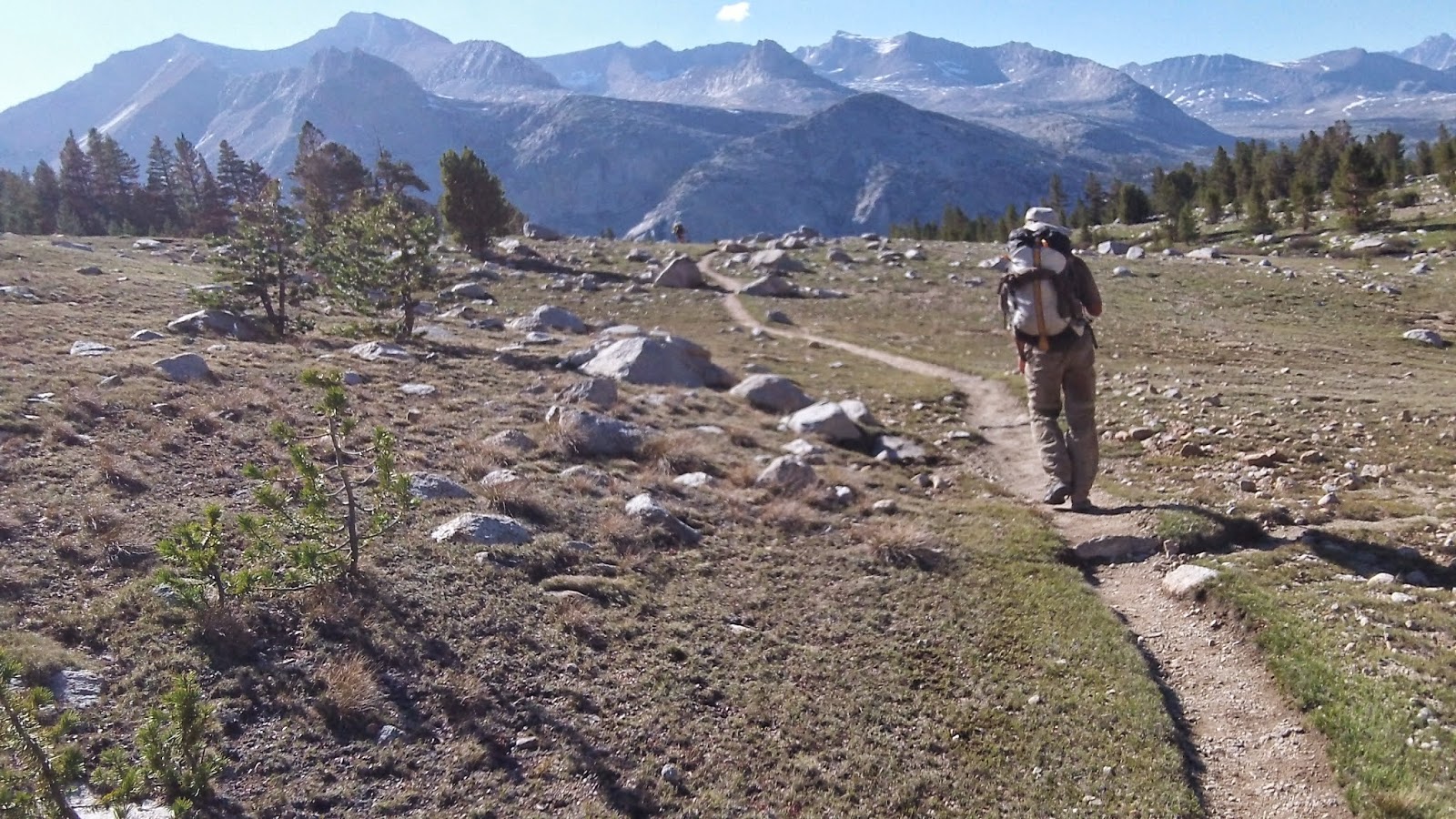 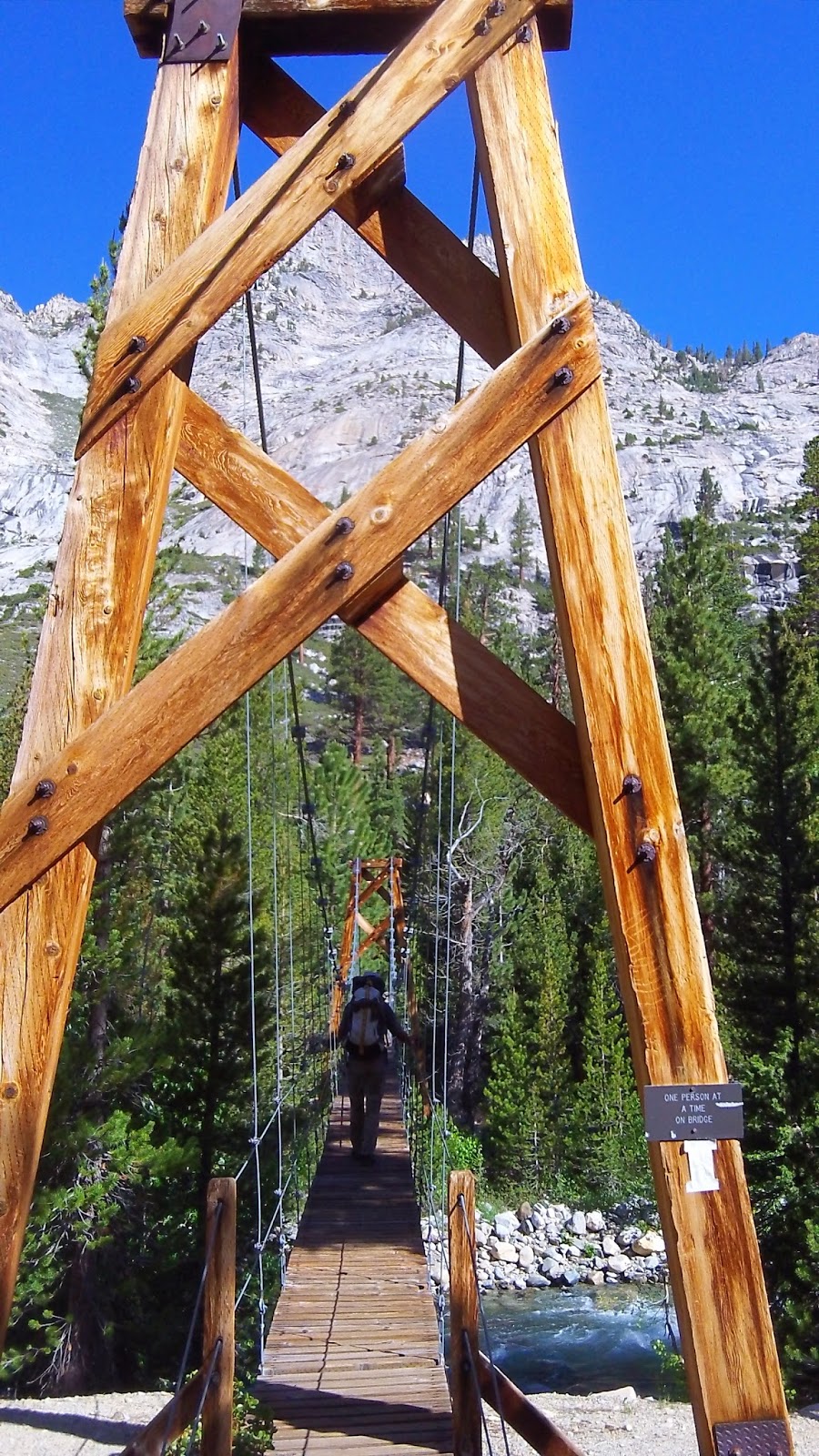 This day started on the wrong foot. We didn’t wake up until the sun cleared the mountains— which was very far into mid-morning, and even once we got up, it was a painfully slow start. I ate my half of our granola, and it seemed to spike my blood sugar more than usual. I felt shaky and terrified (even before we began walking), and my legs felt weak.

Zach crossed the suspension bridge first, while I took his picture. It looked like fun! I followed him over, but as I walked, and the bridge wobbled and bounced beneath my feet, my whole body trembled, and I felt a bit like I was going to faint. I clutched my trekking pole in one hand and the cable railing in another. Normally I would love the somewhat dizzying sensation. Today, as soon as I got across the river, I actually started crying.

Zach asked what was wrong, and I couldn’t give him an answer. I felt like my body was slamming me with waves of negative chemicals, shutting down every ounce of sense and sanity I had left. I cried for a while, and tried to pull myself together, and then Zach led the way.

We climbed up a bit, then followed along the left side of a torrential stream that fed the stream we had crossed on the bridge. Something I noticed that day was that it was hard to see much distance in the Sierra: huge mountains were always launching up in the way of any view. With this jumble of mountains, hiking was more like finding your way through a maze, and it was impossible to tell where you’d be heading at any given point, or which of the notches in the mountain was the pass you’d be crossing in a few miles.

We had to cross a stream, which seemed to take forever, with the removing of socks and the putting on of shoes and the wringing out of footwear, but at least none of the stream crossings were hard. After that I sat and ate several spoonfuls of peanut butter. (But our peanut butter was already dwindling at an alarming rate.) 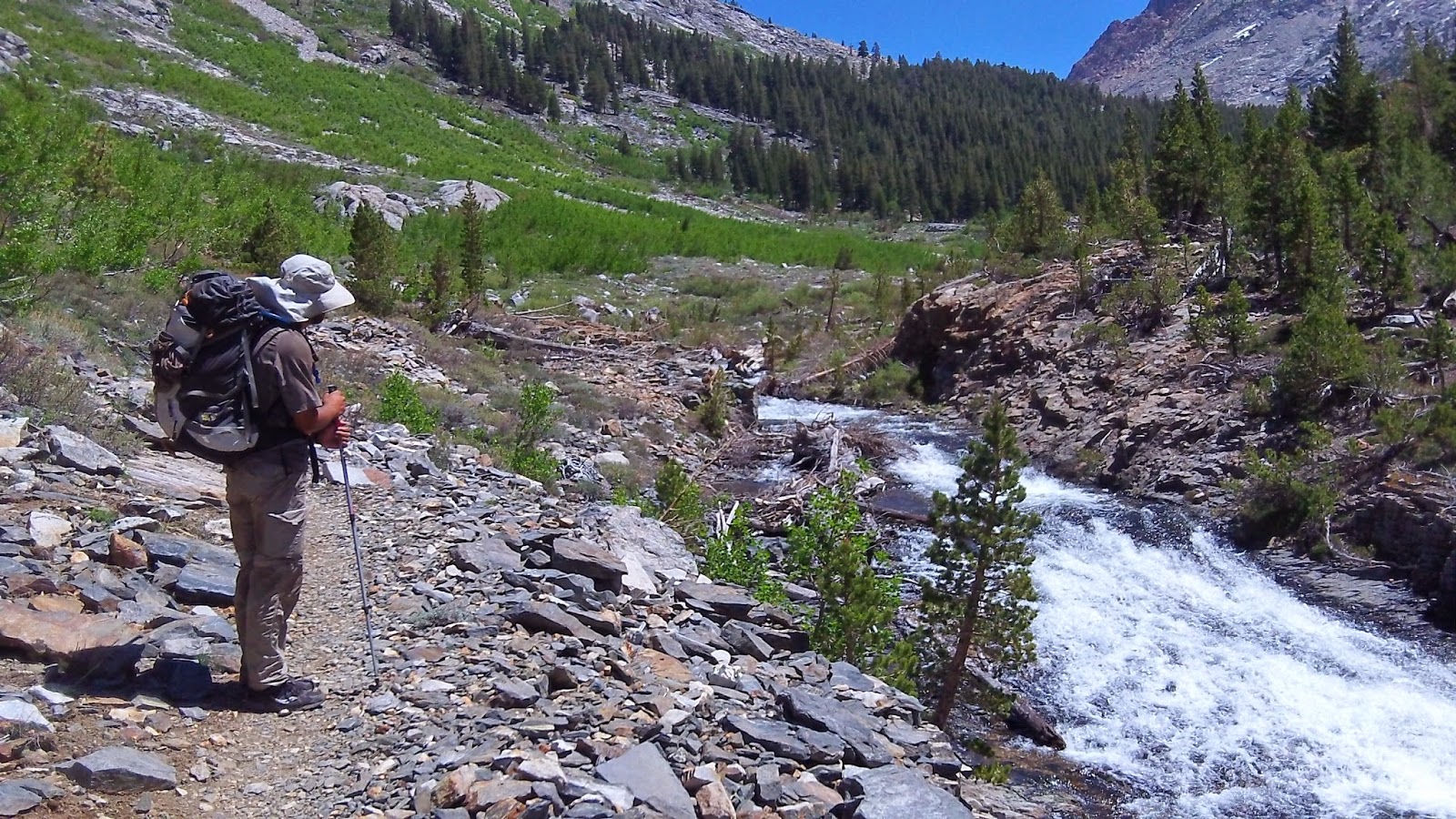 We had to climb well over 3,000 feet in the next seven miles to reach Pinchot Pass, at elevation 12,139 feet. The trail was a never-ending slog upward. I began walking slower and slower, bent almost double, even though the slope wasn’t that steep. My legs felt like they had been filled with lead, and my whole body ached with exhaustion. Oddly enough, my pack never felt that heavy. It just felt like my own body had doubled in weight. But inside me, my heart felt quick, and was pounding on me like a punch in the chest. Raw fear, I kept on telling myself. This is what raw fear feels like. It was exhausting and primal, wearing on me, dragging me down, making me feel like I was about to hyperventilate at any moment.

At last, when my walking speed was literally the speed of a crawl, Zach stopped in frustration. “We’re going to stop and have a meal,” he said.

“Thank you,” I whimpered.

We sat on a rock that was surrounded by grass, with a nice view of the rushing river and the mountains all round. I was so shaky that I could barely eat the food that Zach cooked for me. 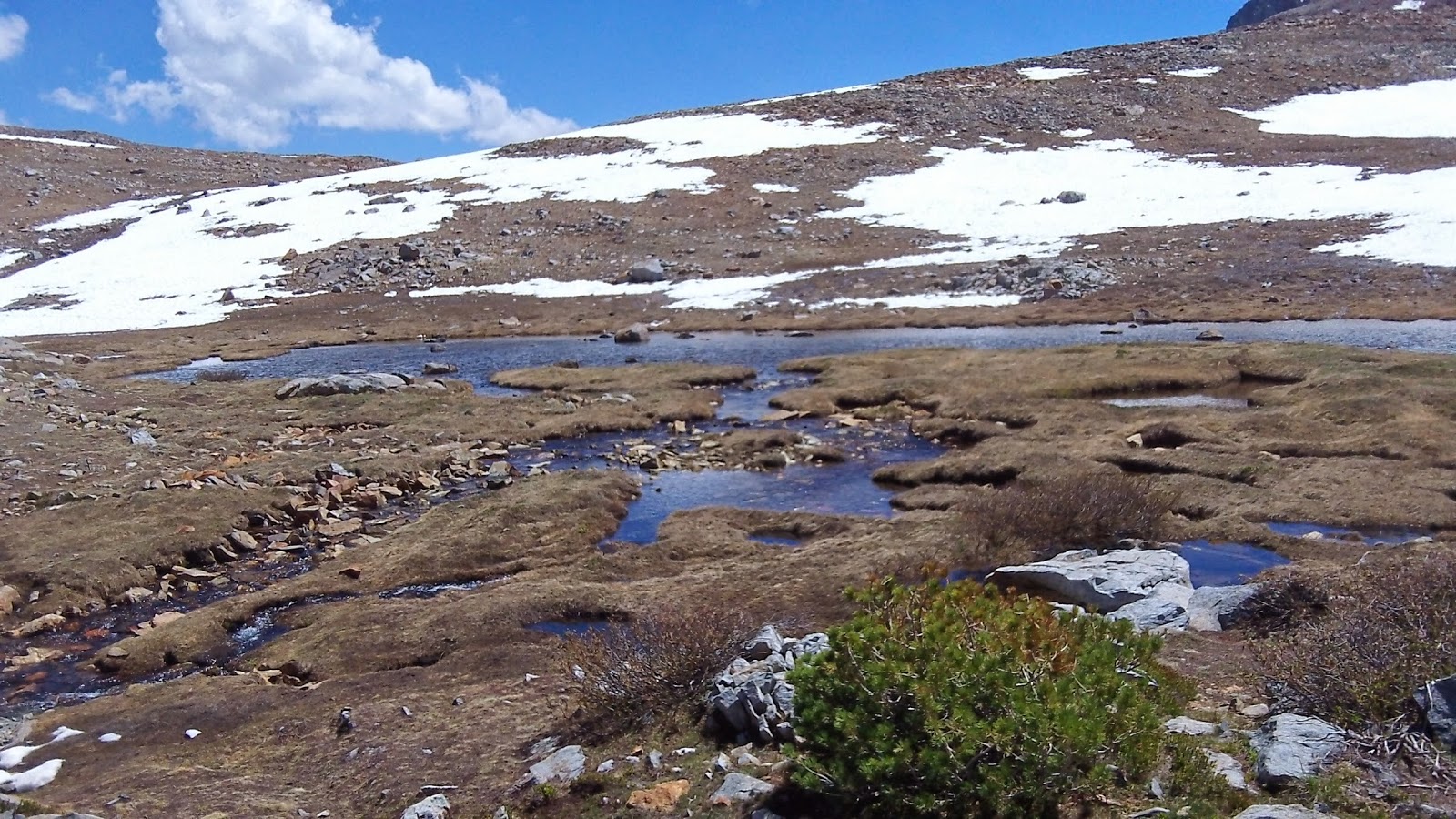 As we ate, we weighed our options. Today we realized that, with my slogging, there was no way we were crossing two snowy passes in one day— we’d cross Pinchot today, Mather tomorrow, and Muir the day after. But that meant we were only going 13 miles today. So we’d have to ration our food more sparsely since it would take us longer to get to the next resupply point. The thought of the three remaining passes made my heart quail. Still, with a breakfast, half a dinner, and some peanut butter in me, I felt better equipped to take on the day.

As I re-sorted our food bags, I suddenly realized something: we had lost one of our dinners. In disbelief, we sorted through our bags again. The chili— one of our heartiest meals— was gone. This meant that we’d have to go on much stricter rations, especially since we were taking an extra day to hike this section. Still, it was hard to be too upset when I was full for the moment, so we packed everything up and headed back to the trail.

After a few miles, we started the set of switchbacks up to Pinchot Pass. We chatted while we zigzagged across the cliffs of crumbling rock, talking nervously, with Zach desperately trying to distract me from the pass up ahead.

We had to cross a snowfield before we could get to the pass, and in my journal I recorded that I was able to stay calm, with only one minor freak-out when Zach post-holed next to a boulder, breaking through and falling into a hole that took him a while to scramble out of.

At last, we reached the top of Pinchot Pass, and I raced to the north edge, heart pounding, wondering what we’d be up against. When I saw, I almost cried in relief.

The other side almost looked flat. There was a definitely a lot of snow, and it was a long way down to the tree line, but the landscape stretched out in a gentle slope. Zach was relieved, too (mostly because he wouldn’t have to deal with his hysterical wife on the way down). We sat down and drank Gatorade and ate our remaining Fritos to celebrate. Then, so relieved that I was almost sobbing with thankfulness, we began the somewhat slow, but very easy, descent. I still felt nervous walking across the snow, but the slope wasn’t steep. Plus, I was starting to be able to “feel” the snow better, knowing when it would hold my weight and when it wouldn’t. We only had to do a bit of scrambling and sliding on scree before we found ourselves on flat ground. 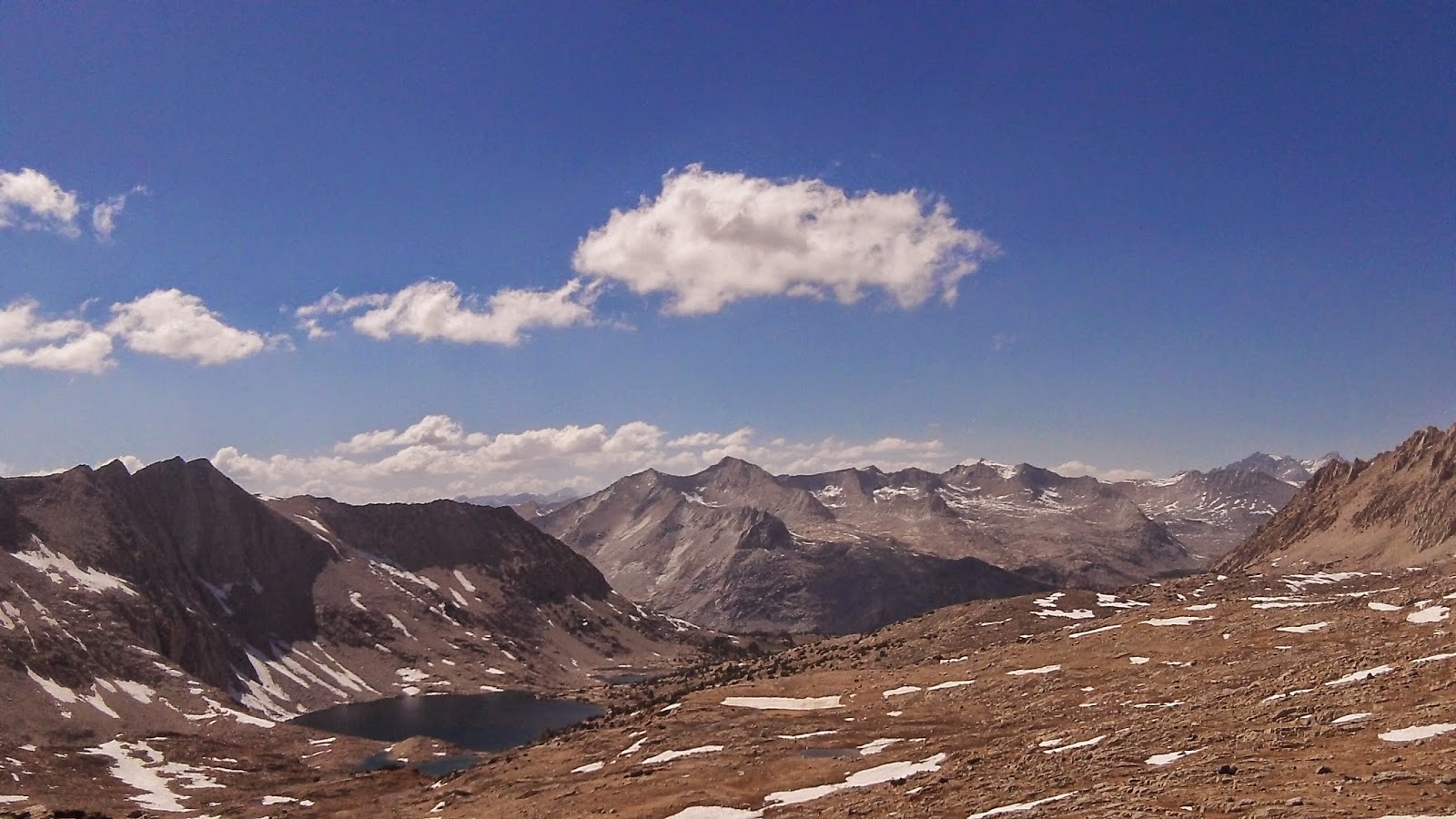 By this time, it was late in the afternoon, so our goal was to get as close to Mather Pass as possible by nightfall. Southbound JMT hikers had gravely informed us that Mather was very difficult, but since they hadn’t reached Forester Pass yet, it was impossible to figure out their scale for this assessment. Still, Mather Pass loomed in the back of my head. 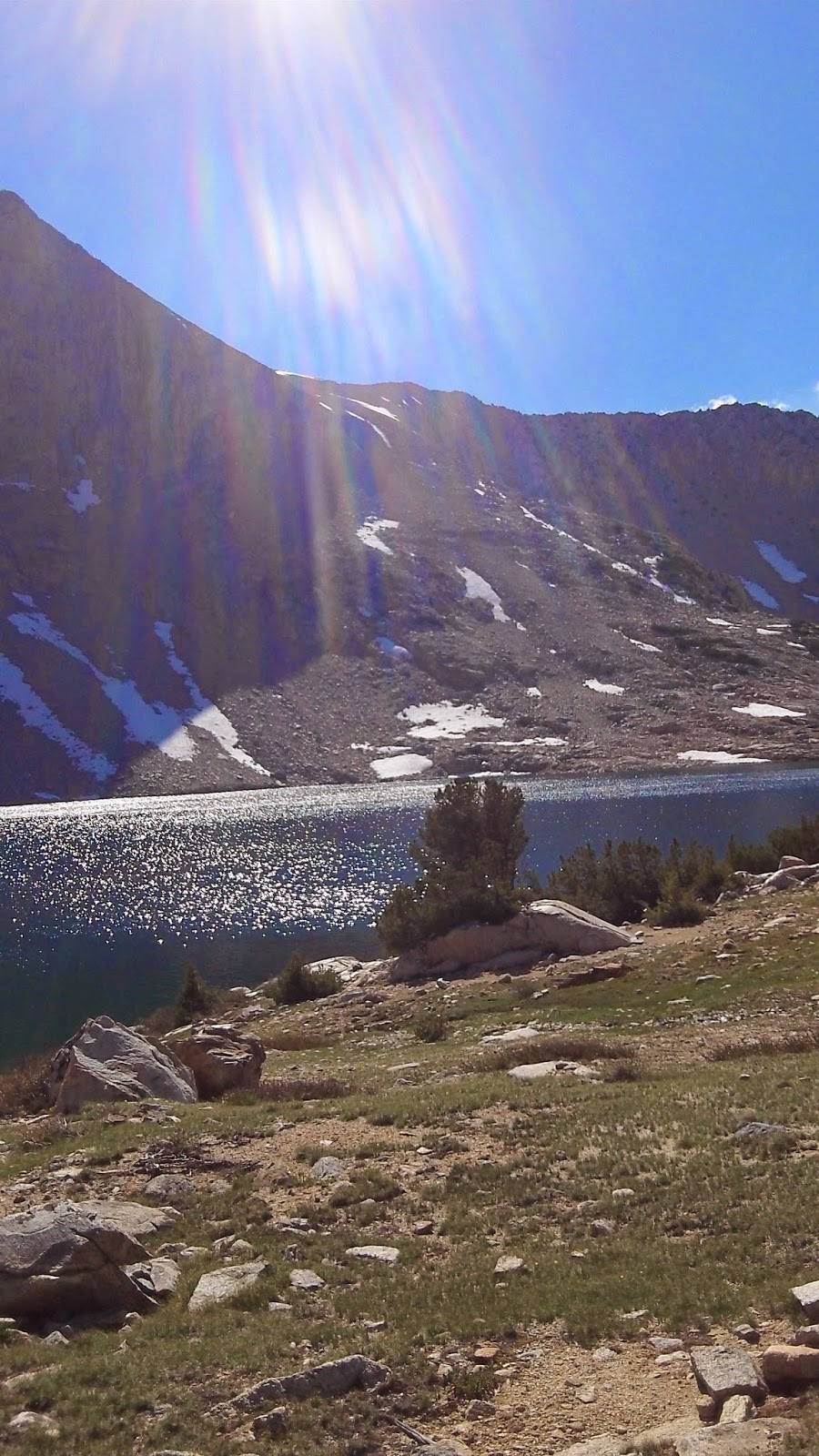 We passed the beautiful Lake Marjorie (“so turquoise!”, I noted in my diary, but now for the life of me I can’t remember anything particularly stunning about this lake) and delved into woodland again. We hiked for a while with a middle-aged woman from Vancouver, named Sugar, who was hiking solo. She joked that this trip was her “midlife crisis.” Together we crossed a few difficult streams, which often involved hopping onto slick, round boulders or inching our ways across logs. At one stream, flowing swift and dirty, we simply couldn’t find a way across, and braved the numbing water. Although it looked deep and was very swift, it only came up a bit past our knees, and the force of the water was no worse than the gusts of wind in the desert.

At last, Sugar decided to camp, but we pressed on, hoping for at least a bit more than 10 miles! Finally, we found a nice little spot near a small stream, and set up next to the trail. I washed our socks in the frigid water, my hands freezing cold, and hung them out to dry on a log while Zach fixed supper. Then we crawled into our tent and plunged into sleep to the sound of the rushing brook.