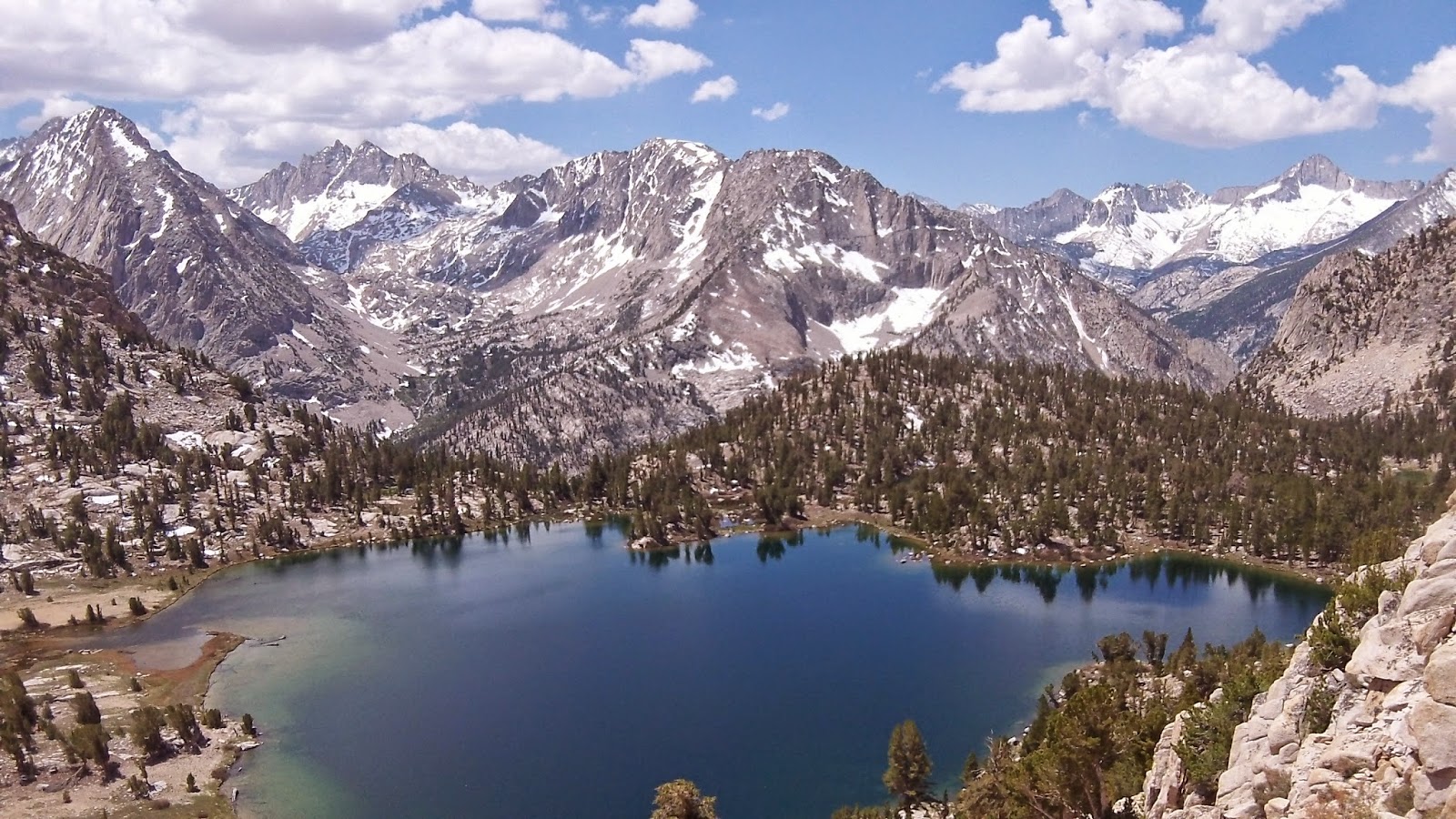 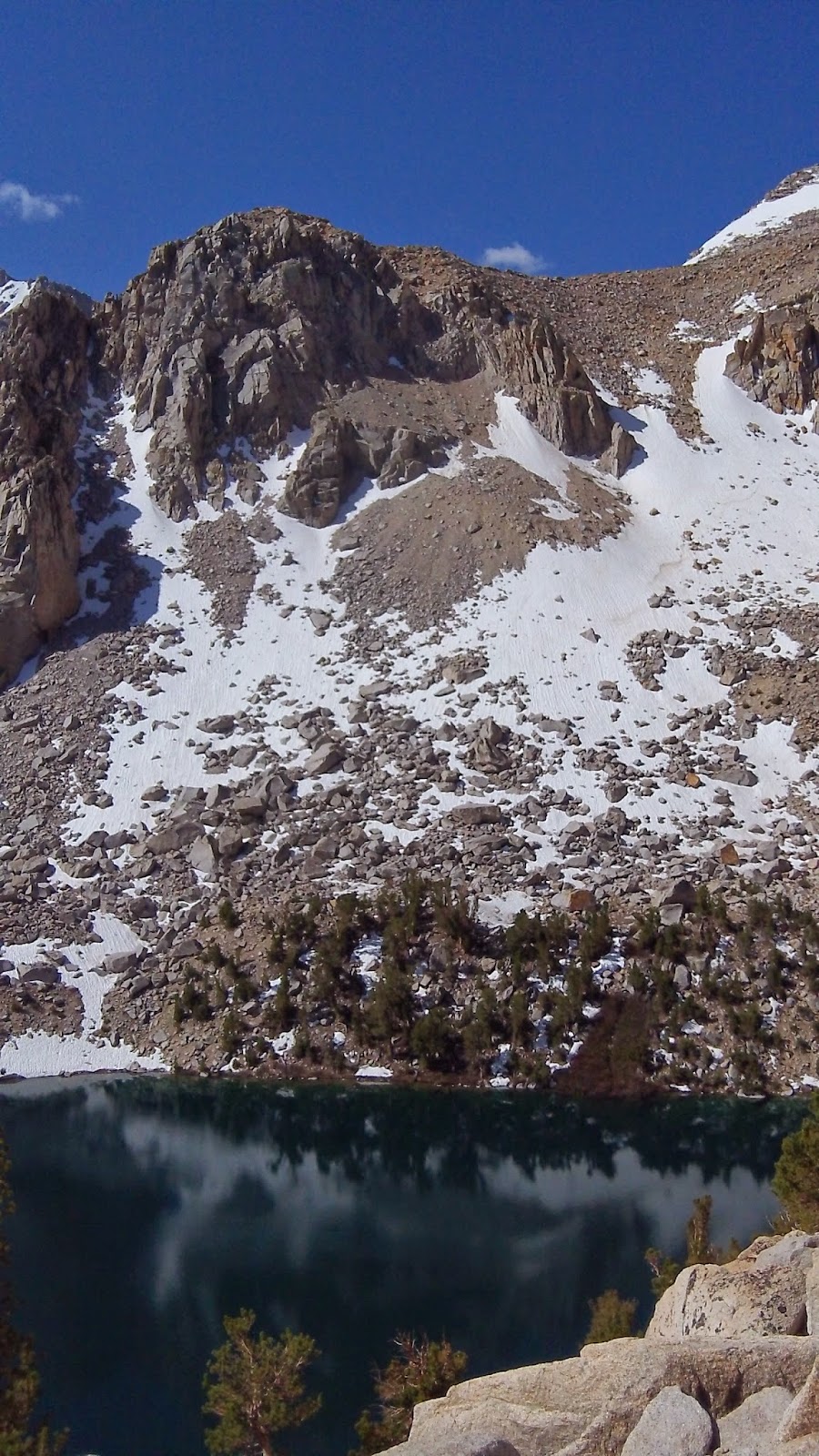 We woke up that morning feeling refreshed, and we were packed up and out of the campground by 7:00. We paused by the sign at the trailhead with a picture of a bear and the heading, “Never underestimate an animal that can learn to ride a motorcycle.” This led us to a conversation about the insidious black bear motorcycle gangs of the High Sierra, which kept us entertained as we began the ridiculously flat, never-ending set of switchbacks that would take us back over Kearsarge Pass and on our way to the PCT.

About halfway up, Zach noticed that his phone was still on, and that we actually had reception, thanks to our clear view of the desert floor below. We dropped our packs and I called home, trying to get a more complete picture of what was going on with everyone. My best friend thought that we were still in the desert, and I had a hard time trying to convey what the landscape looked like now. Although it was great to hear everyone’s voices, I felt like I couldn’t even begin to explain what was going on with us. How could I describe Forester Pass in a few words, especially without making everyone nervous about the upcoming passes? And that’s when it really started to hit me: in the next three or four days, we had to cross four 12,000-foot passes, which would most likely be buried in snow.

I started to freak out a little, and we weren’t even back on trail yet.

We said goodbye and shut off the phone, then turned back toward Kearsarge Pass. It was the last cell reception we’d have on our phone for two difficult weeks.

Once we reached Kearsarge Pass, we said hello to the other hikers headed in, then continued along the Onion Valley Trail, which ran parallel to the detour we’d taken the day before, following the edge of a mountain rather than cutting down through the valley with the lake. Once again, the scenery pummeled me with gorgeousness: deep aquamarine lakes, craggy gray snow-painted mountains, picturesque firs among tumbled boulders. But these made me nervous, too. Beautiful mountains meant snowy passes, and snowy passes meant post-holing, and post-holing meant taking an hour to go one mile…! 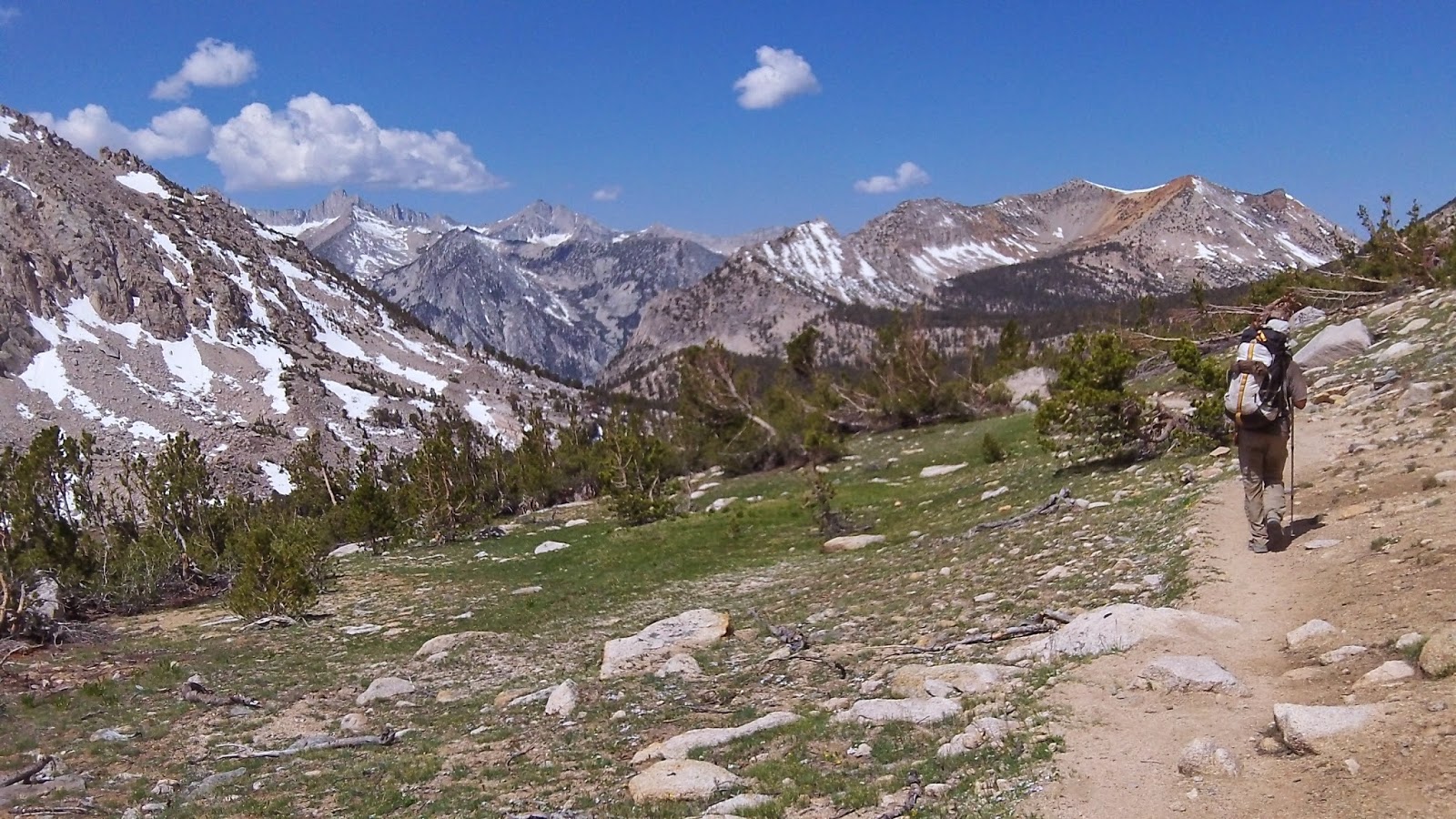 Zach tried to keep me calm as we hiked the long trail toward the next pass, but my heart was racing (and not just from the elevation gain, which was pretty steep). I tried to hold it together, but all I could think about was Forester Pass.

“We’ll see what it looks like when we get there,” Zach kept saying. I just nodded and felt my chest tighten.

The next pass we had to tackle was Glen Pass, at 11,947 feet. The trail headed for it in a straight line, then ascended some small, steep switchbacks to a low point in a crumbly dark gray ridge of mountains. It looked a lot less intimidating than Forester Pass, and the south side was pretty clear. But when we got to the top, I almost burst into tears. 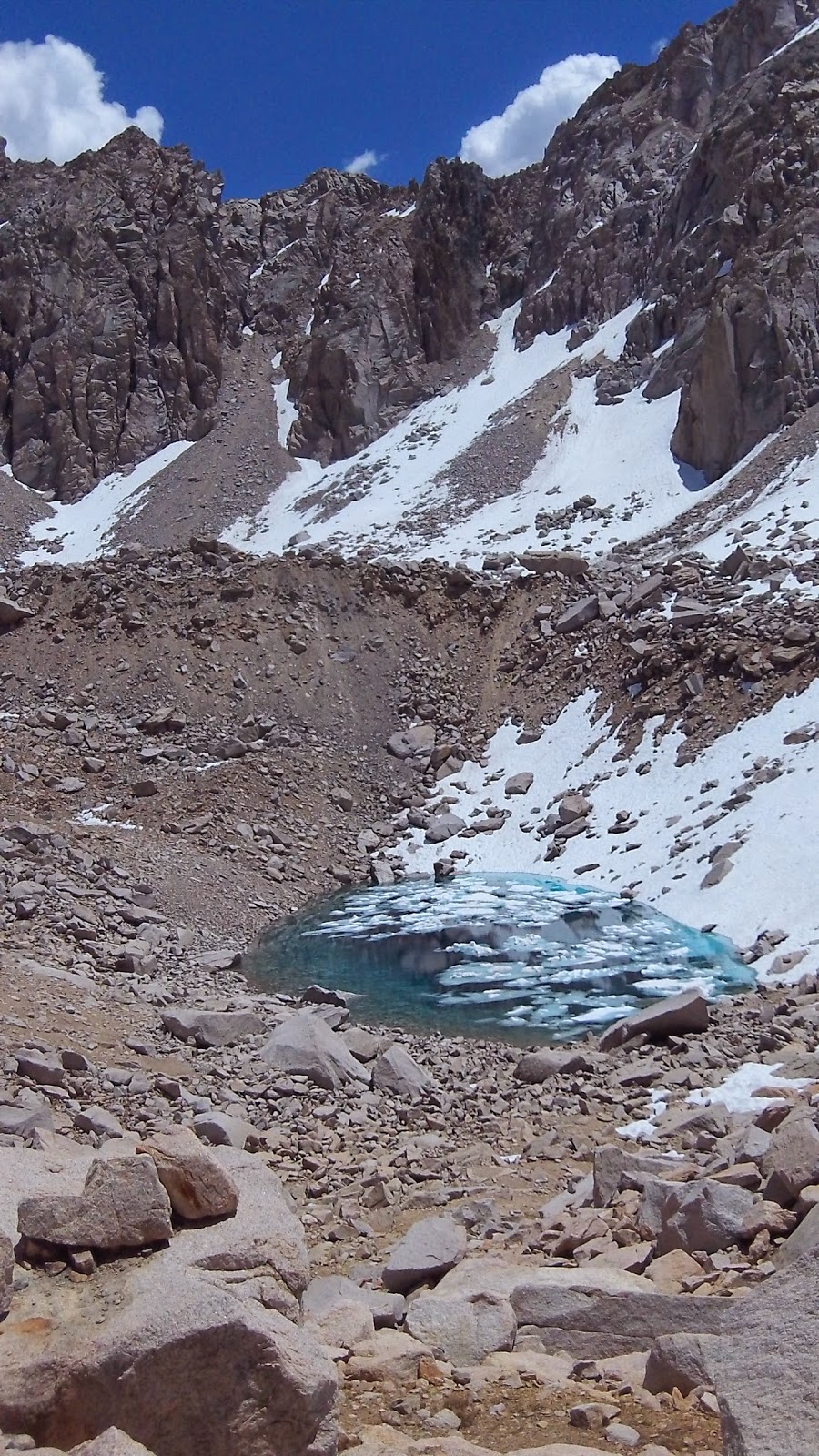 Glen Pass’s north face was covered in a blanket snow, with myriad footprints leading in all directions. Never had snow looked so deadly to me: it was like looking at an ocean to cross when I could barely swim. I sat down on the rock, shivering a little in the stiff breeze. “I can’t right now,” I said to Zach, trying to hold back tears.

Zach didn’t even try to make me. He sat down next to me. “Let’s have some Fritos and Gatorade,” he said, pulling out the Gatorade powder and the bag we’d bought yesterday.

We ate the snacks, and I felt a little less shaky after that. I sat and caught my breath while Zach scouted out where to go. Some other hikers joined us, all of them in high spirits, and started straight down the mountain, which made me feel a bit better. Some of them even glissaded down.

At last Zach and I put on our sunglasses and started following the first set of footprints that led across a steeply-sloping snow face to a slope of exposed scree. Zach went first and I followed. I tried to breathe slowly and deliberately. Then, as I planted my next foot, the snow gave way.

I freaked out, my body shooting adrenaline through every vein. It took me a split second to realize that the snow had only crunched down half an inch— my body had reacted as if the whole snowbank had given way. I began tearing up, wondering if all snow-walking was going to be like this. I knew that I was overreacting, but my body insisted in pumping me full of the flight-or-fight instinct that wore my nerves raw.

Zach and I edged over the snow, and he was the only one who post-holed, not very badly, on a “moat” around a rock. It was about 10:30 in the morning, which seemed to be the golden hour for snow-walking: the snow wasn’t icy, but it was still a lot more solid. We vowed that we’d never cross a pass in the afternoon again.

At last we stood on (relatively) solid ground, a scree field. Looking straight down the steep slope, we saw a narrow strip of rock that led down almost to the bottom of the cliff. The PCT’s easily-spotted dirt path cut parallel lines through the strip, but the majority of each end of the switchbacks was buried in snow. We decided to try to clamber down the middle.

This proved more difficult than we expected— the slope was very steep, and most of it was covered in dust and loose scree. Soon we were sort-of-climbing, sort-of-jumping, sort-of-sliding down the face of the mountain, trying desperately to brace ourselves and keep ourselves from sliding out of control. This was hard with our bulky backpacks on, and we created a veritable avalanche as we scrambled down. Once again, my body kept on freaking out every other second as a rock gave way beneath my foot, sending me skidding down another few feet until I hit a solid rock.

In this manner, we finally made it down the side of the cliff. The other hikers, happily glissading, were long gone. Zach wanted to walk across the flat snowfield to reach the non-snowy ground, but I insisted that we go over a boulder field instead. It took us a lot longer than it would’ve to just walk over the snow, but I was so freaked out about snow-walking that I couldn’t stand the thought of it. So we scrambled over the boulders, which were a bit unstable themselves, causing us to constantly check our balance or catch ourselves from a fall. It’s a miracle that neither of us broke an ankle. 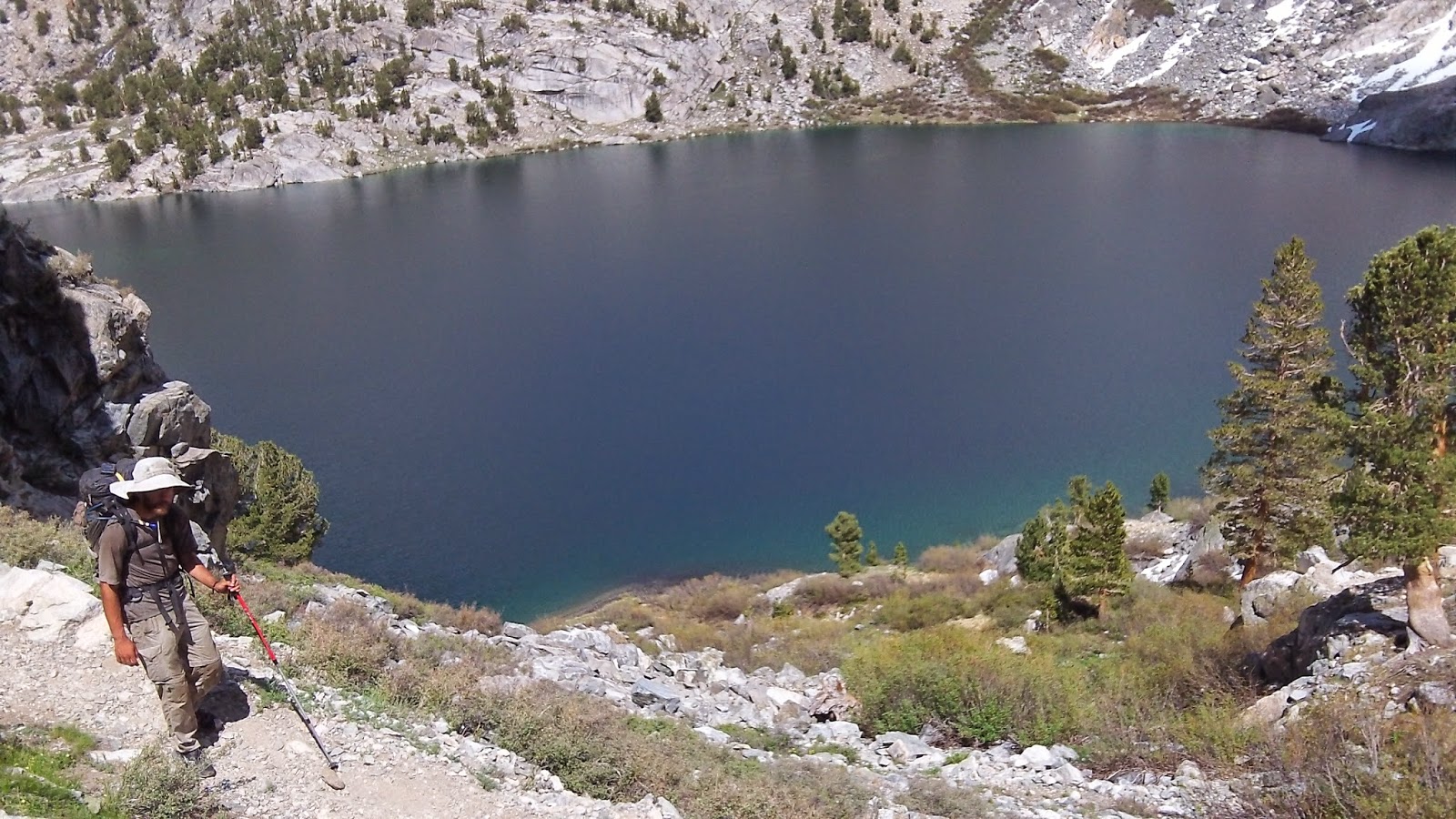 At long last, we found ourselves out of the snow and back into the muddy trail, which was sometimes a trail and sometimes a swift, shallow stream of snowmelt. As we hiked down from the pass and back below the tree line, I remembered how I had imagined the Sierra when we were in the desert. Some of it had been true: the water was abundant, beautiful, and tasty, and we never had to worry about it. The scenery had been gorgeous. But I had never guessed that the Sierra would frighten me this much. I had no idea that snow could make me this scared. At least Glen Pass hadn’t been as bad as Forester.

Zach and wound our way through a pass and found ourselves looking out at twin lakes, divided by a verdant swatch of land: the Rae Lakes. The perfect blue water, glittering under the sun, was surrounded by castles of majestic snowy stone peaks, swathed at the edges of lines of green firs. I stared at them as if I was looking at a picture in a book. 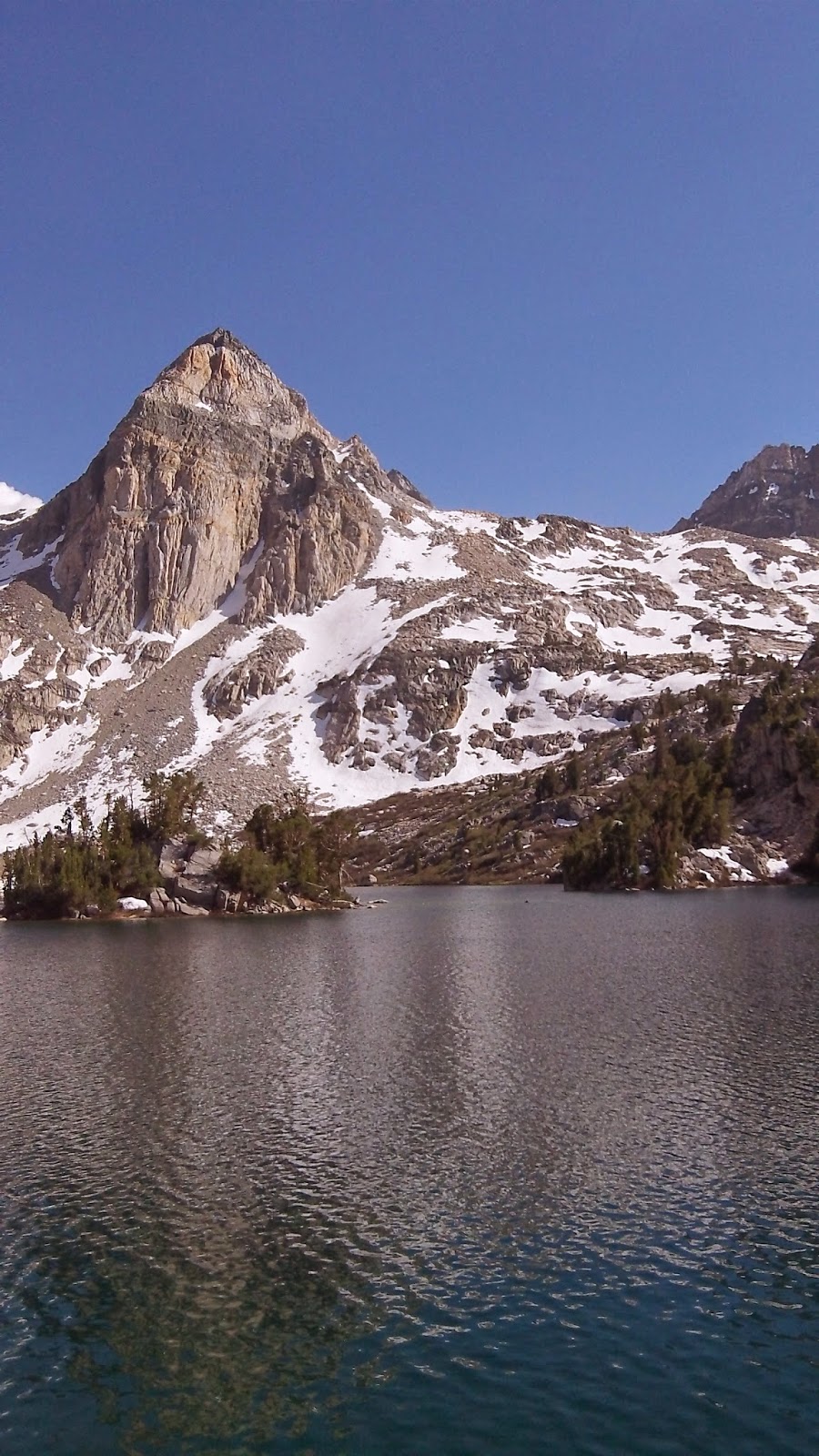 We sat down and made some lunch— one cup each of pasta, seasoned with bacon bits and parmesan. We were determined to ration our food better this time.

We continued into the valley, hiking around the eastern edge of the Rae Lakes. At one point we had to hop across a couple narrow logs that had been placed over the stream that connected two of the lakes.

When we were about to leave the Rae Lakes behind, Zach said, “You should really take a video of these lakes. They’re the most beautiful ones we’ve seen yet.”

It was true, so I nodded and pulled out our camera. As I filmed, I began to narrate: “So this is where I remember how beautiful this place is, instead of how terrifying it was…”

After taking the video, I stood and looked at the landscape I had just filmed. It was gorgeous. It really was. It was gorgeous, and I wasn’t appreciating it the way I should. At this point, I felt like this stunning landscape would actively try to kill me.

Fortunately for my barely-contained sanity, we left the gorgeous, murderous landscape behind and continued into a valley, which was full of trees and rush-filled marshes. We saw mule deer, some with antlers. Little purple flowers hung upside-down from stems. We had to cross several streams, including a swift but shallow creek that we had to wade through. We learned the walking with cold, wet feet was not very fun.

Night was drawing on, but we walked quickly on the now-mostly-flat trail, checking our map for landmarks. Mosquitoes began to come out in droves, encouraging us to keep moving.

After about an hour after the stream, Zach checked our maps against our GPS, and found out that we’d only gone one mile. This seemed impossible— we’d been keeping up a good clip and hadn’t taken any breaks. I shrugged it off, but Zach obsessed over it, trying to figure out what in the world had happened. We double-checked our landmarks, but still couldn’t figure it out. To this day we don’t know what happened. (So, probably aliens.) 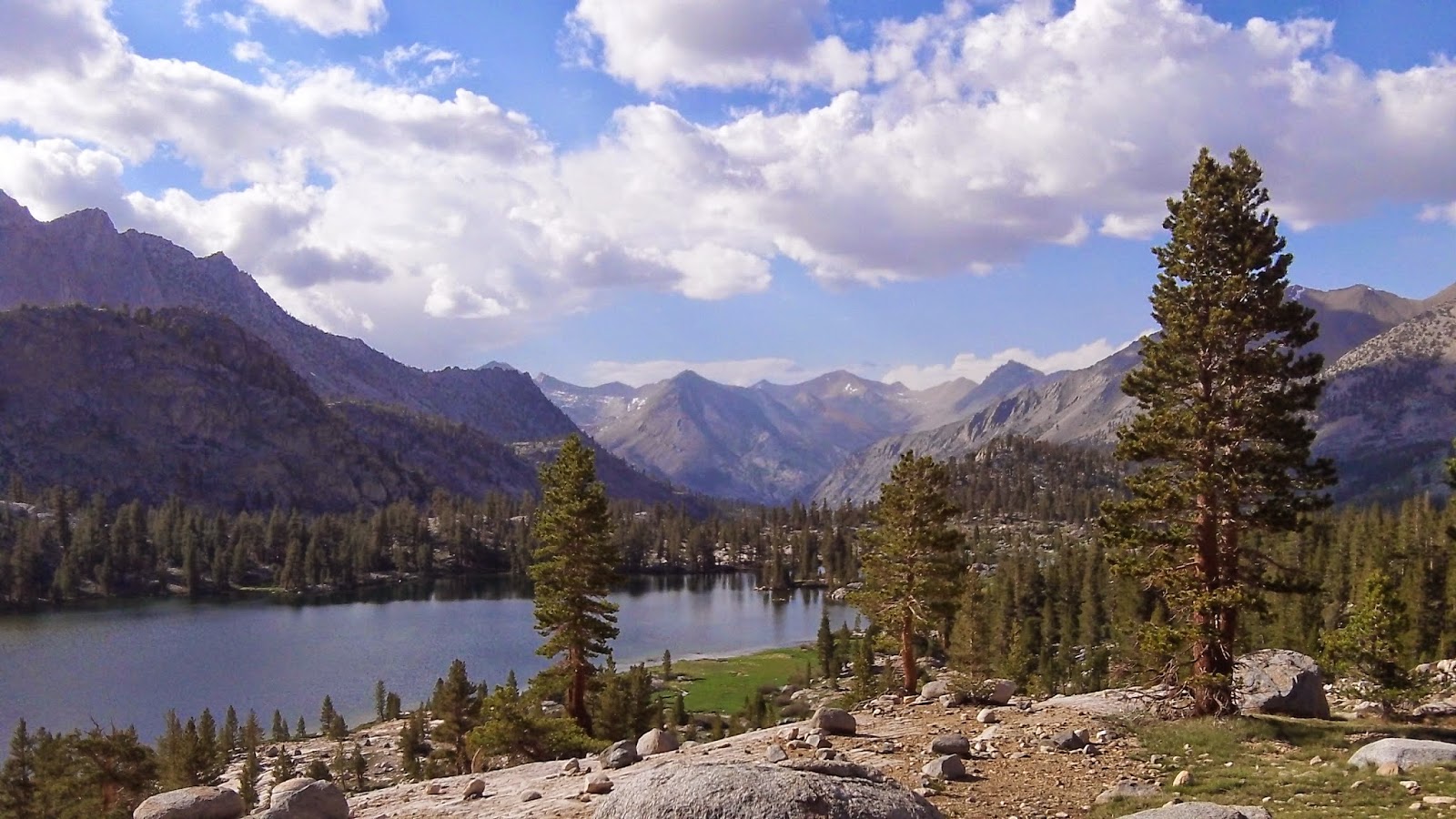 Our campsite was an established spot among many next to a rushing stream that was spanned by a suspension bridge. Our neighbors had somehow managed to lug in a three-room, six-foot-tall tent, and they were currently sitting around a campfire. They gave us a dirty look when we even considered camping in the spot next to them.

I gathered water from the stream (which was absolutely frigid, since the water was snowmelt and the weather was getting cold), and Zach cooked mashed potatoes for dinner. I felt so exhausted that I could barely lift my spoon to my mouth.

At last, after we were fed and all the camp chores were done, we crawled into our tent and collapsed in exhaustion.

I fell asleep knowing that we’d have to cross another snowy pass the next day.