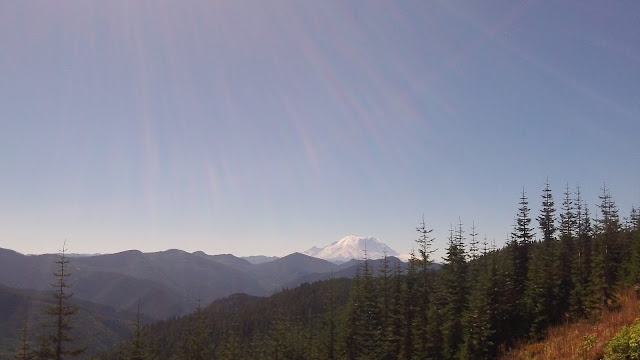 We woke up the next morning to find that we weren’t freezing to death— in fact, despite the frosty air nipping our noses, we were quite warm and snuggly. What a relief! The sun had just cleared the ridge and was pouring slats of morning light over our tent. My spirits rose and I crawled out of the tent to see what today would bring.

Despite the warmth of our sleeping bags, it was definitely a chilly morning, and I put on every layer I had. As we were tearing down camp, we saw a few people in camouflage with paint smeared on their faces, two of them carrying guns and one of them with a bow. Recognizing them as elk hunters, I waved hello and walked over to talk to them.

It was a dad and his daughter and a buddy, and we had a nice conversation, stamping our feet to keep warm in the cold morning. I asked them about elk hunting and they asked about the trail. The daughter said that she and her dad would usually shoot two or three elk a season and their family would butcher them and eat on the meat all winter long. I asked how much an elk could weigh, and they said up to a thousand pounds. I asked them how on earth you get a thousand-pound animal back to your car, and they talked about field dressing and pulley systems.

I really enjoyed talking to them— it was great to meet people who were experiencing the same outdoors in a completely different way. Both of us had our place in these incredible mountains.

After saying goodbye, we packed up quickly and booked it toward the nearest water, a spring a little off-trail— we were down to one liter and getting very thirsty. We shivered as we hiked along off the ridge deeper into the forest among ferns and moss, and at last we found the spring and filtered water and actually cooked a meal because we were still hungry. Then we slogged on.

Soon we left the deep woods for sparser forest and ridges, often marked with trickling springs that seeped into the hill. We were about to take a break at one of these when a southbound section-hiking couple mentioned to us that there was trail magic about five miles north of here. Our hearts rose at the thought, and we thanked them and took off as fast as we could go!

The trail led us in and out of forests and meadows, the meadows often strung over with huge power lines. After a couple hours, we came to a dirt road and saw a sign with an arrow. Huzzah!

We walked down the road toward a little cul-de-sac. On the way, we passed a pulley system with a bloody hook rigged up on a tree, with a massive splatter of blood on the dust beneath it. Fortunately, we knew there were elk hunters about, so it didn’t even occur to me until now that that might’ve looked really creepy.

Ahead of us at the cul-de-sac was an SUV with a table and chairs set up around it, with one hiker chilling there. As we approached, a late-middle-aged woman with sunglasses and short-cropped grayish hair popped out from behind the car and greeted us with a chipper, warbling voice. “Sit down, I’ll make you some sandwiches!” She pulled out a massive cooler. “I have roast beef or tuna, and some homemade potato salad, grapes, milk or chocolate milk, coffee, soda— oh, and you have to try these donuts! They’re from a local bakery, my favorite. Also, would you like your sandwiches cold, or fried in butter?”

We stared at her in disbelief, overwhelmed by the buffet. At last, I stuttered out that I would love a fried roast beef sandwich, and Zach asked for a tuna melt. The woman, who introduced herself as Teresa, set to work grilling our sandwiches. We ate the donuts, which were fried in so much oil that they were crunchy— they were the best donuts I have ever eaten. I drank chocolate milk and Zach drank coffee and we snacked on grapes and donuts and Teresa’s homemade potato salad, then chowed down on our sandwiches, fried to crispiness in real butter.

Teresa told us that she had just retired from being a teacher for twenty years. As a celebration of her retirement, she was coming out here to feed hikers. I couldn’t even begin to thank her enough for her celebration plans!

As we talked, a hiker walked up and quietly sat down, only speaking to thank Teresa and tell her what kind of sandwich he wanted. He looked scruffy and nearly indistinguishable from other guy hikers, but I looked at his sad, faraway blue eyes, and recognized him. 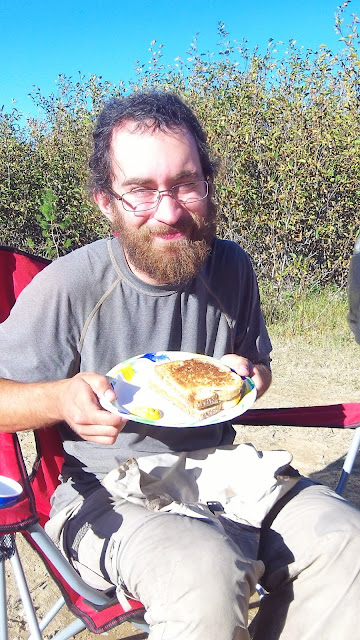 “Hey, you’re ManBearPig’s brother, aren’t you?” I hadn’t seen him since all of us had been at Walker Pass before the Sierra.

“What’s your trail name? I never learned it.”

“Shamiko Rassmissan,” he said, and offered no explanation for it.

Zach in the meantime was checking his phone to see what our next resupply situation was. We were hoping to get to Snoqualmie Pass tomorrow, but we abruptly realized that it was a Saturday, and the gas station post office we were aiming for was only open 10-12 on Saturdays. And we were still almost twenty miles from the point, and it was getting late in the day.

We both groaned. The weather was so nice that we really, really didn’t want to get caught in a town over the weekend— we had to take advantage of this weather while it lasted!

We agonized over this, trying to decide whether it was worth it to break our backs tonight and tomorrow to reach there, or if we should just take the loss and deal with it. Teresa listened without comment for a while, and then, nodding decisively, she said, “All right, how’s this. Tomorrow I’ll meet you at one of the jeep roads, and drive you to Snoqualmie Pass before the post office closes. Would that work?”

We stared at her, dumbfounded. “You would do that for us?”

“Sure. I had plans for tomorrow morning, but they’re not that important. I can rearrange. Why don’t you look at your maps and see where a good place to pick you up would be?”

Zach and I were stunned by this offer. Zach tried in vain to think of another option while I looked through our map to try to find a good jeep road. I consulted with Teresa, and we agreed to meet at mile 2396.4 at 11:00 tomorrow morning, which would shave five and a half miles off our trip, making it much more doable. Zach was still resistant to the idea, but Teresa insisted that she was willing, and so we accepted.

Now that we had fewer, but still many, miles to walk before tomorrow, we said goodbye to Teresa, packed up and hiked out with full bellies. I never once doubted that she would be where she said she would, and on time, too. I knew we’d get to our resupply on time. We wouldn’t have to waste a weekend waiting for our box.

As we hiked, Zach’s stomach began cramping, and soon he was almost groaning with pain and nausea. I’m ashamed to say that I wasn’t sympathetic at all— “Stop eating so much at trail magic!” I chided. But after a while his pain was so sincere that I felt a little guilty.

We hadn’t gone very far, maybe two miles, when I sighed in frustration and said, “We should just camp here and try to get up early tomorrow.” Zach agreed, and we found a campsite in a little dry meadow and set up. This meant we had to walk 10.8 miles tomorrow morning before 11:00, which would be pushing it, but hopefully Zach would feel better in the morning, as was his habit.

We set our alarm for 6:00am and snuggled in. Zach was still feeling bad, but soon I heard his steady breathing as he was asleep beside me. It was a nice cool night, not cold, and soon I joined him, fast asleep.