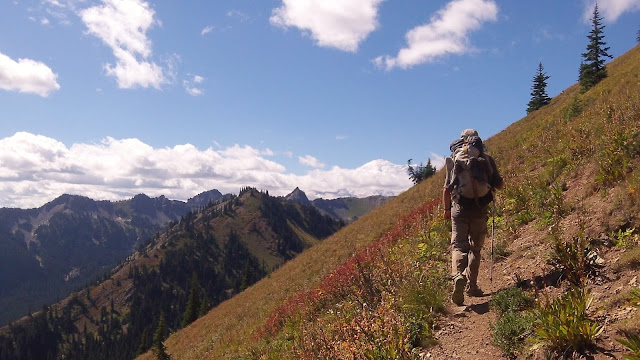 That morning was warmer, so we actually got an early start for once! Despite that, we were both very grumpy and snapped at each other as we did camp chores. Zach packed up while I ran down to the lake to gather water. When I got to the shore, I saw a swath of mist floating over the lake, even though the sky above was blue. I stood awestruck for a moment, watching it float by, then gathered water and hustled back to camp. 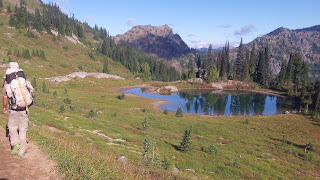 We were both less grumpy now, but still unmotivated. Still, we took to the trail and began plodding along. We were hiking in a more alpine environment today, near clear lakes and across tumbled moraines. I felt unmotivated as well, and my feet were hurting a little, so I struggled along.

Just as my morale was flagging to the point where I could barely lift my feet, I looked up to see movement in the moraine. A second later, a bunny-like animal went boinging over the rocks, dragging a mouthful of plants twice its length. It was a pika! I excitedly pointed it out to Zach, and as I did so, it paused, looking at us, twitching its nose. Pikas, an alpine relative of rabbits, look more like giant mice with round ears, but they move exactly like bunnies. This one looked at us from his round, fluffy-furred face, then dived under a rock, squeaking with a sound exactly like a dog’s chew-toy. Zach and I both nearly died of cuteness. In days to come, whenever my morale was dipping, I kept an eye out for pikas, and they always cheered me up.

After a while, the trail ran along a ledge, and a hundred feet below to our right, we saw Highway 410 running along these mountains. It was easy to see why this was a scenic route: the mountains, with deep green valleys, rose up with the impressive appearance that you’d want for a family vacation photo. 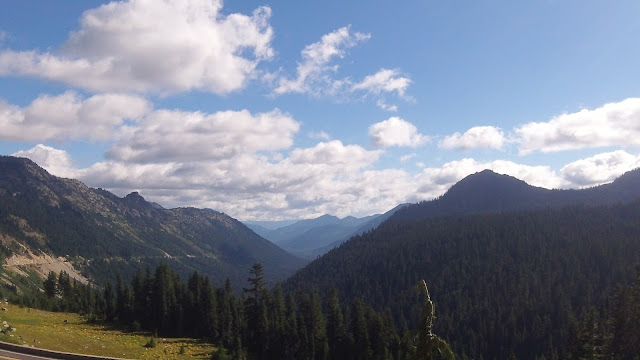 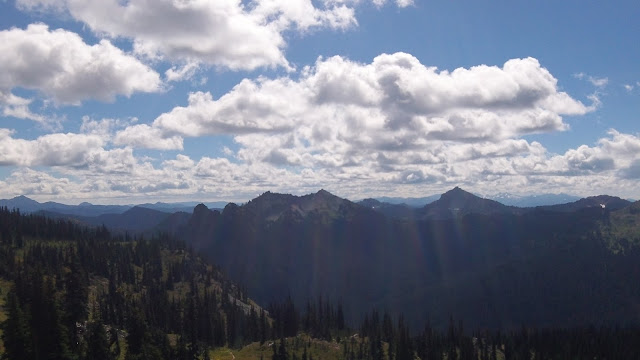 Zach and I stopped for bathrooms and snacks at a highway rest stop, Chinook Pass. We had gone a grand total of three miles, but the view was enticing. From here, we got the perfect view of the mountains and the main valley. For some reason, seeing the mountains with a highway cut through them made them look much, much bigger than just seeing them on foot did. The highway gave them a sense of scale, emphasizing their hugeness.

We sat on a concrete block and ate trail mix by the handful, not so much because we were hungry but because it was something to do. Neither of us felt like walking anywhere. It was such a beautiful day, blue-skied and full of cool air, but we wanted to just savor it, not hike through it.

After a long time, we decided we should probably get going. But then Ken walked up, and sat down, and we all chatted and didn’t hike.

At last we all decided we had to head onward. Ken, with his tiny pack, zipped ahead of us, and we plodded behind. We hiked for a while longer, a grand total of two more miles, and then came to the edge of a wide blue lake surrounded by green meadows that begged to be napped on. Ken was sitting by the water, and we needed some water, so we filled up, but then ended up casting ourselves on the grass and stretching out and eating more trail mix and taking another huge break while chatting with Ken.

Some day hikers, a group of women and a few guys, came hiking by and stopped to chat with us. They were really nice, and enthusiastic about the trail. We talked about the desert and the Sierra and Oregon, and what we thought of Washington so far, and the Goat Rocks. I mentioned that we were all headed toward our next resupply point, Snoqualmie Pass. One of the women started, then declared, “Well then, you’re headed the wrong direction! Snoqualmie Pass is south of here!”

We all exchanged glances. “Uhm, actually I think it’s north,” Zach said gently. (Of course it was north! You don’t just randomly miss a town stop when your life depends on it.)

While we all tried to hide our smiles, and think of a way to tell her she was wrong without insulting her intelligence, one of her hiking companions corrected her. Then we chatted a bit more and they hiked on. 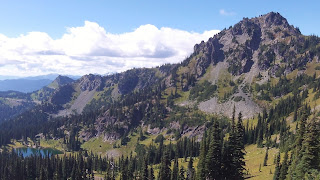 We lingered a bit longer with Ken, watching Clark’s nutcrackers flitting from pine tree to pine tree. I wrote in my diary, “We are seriously wasting time, but the weather is so pretty…”

At last, we mustered our energy, and the three of us stood up and heaved on our packs. Once again, Ken zipped ahead of us, and we hiked behind, higher up into the mountains.

At last our motivation returned to us, and we booked it, hiking into increasingly gorgeous scenery, marked with huge gorges and impossibly craggy volcanic peaks, deep forests and dry sandy ridges, and patches of huckleberry bushes whose leaves were turning red. The scenery constantly changed as we ducked in and out of mountain passes, and I was rapt by it all. 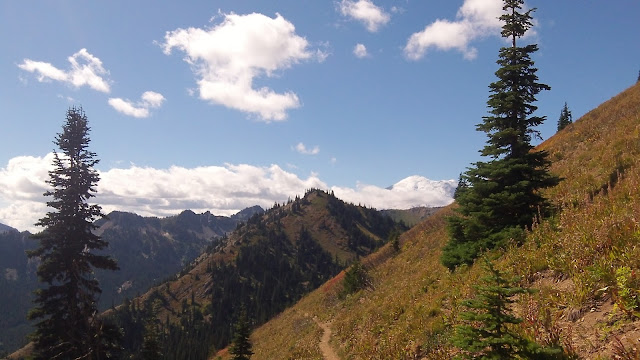 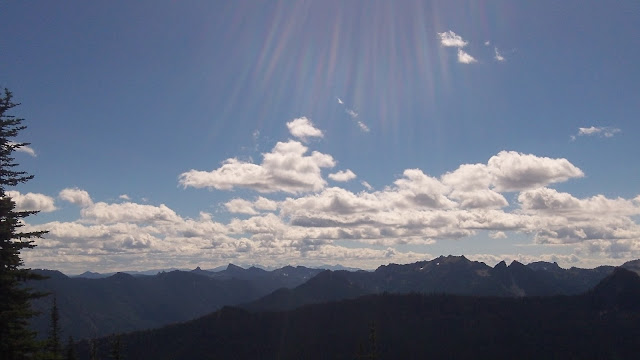 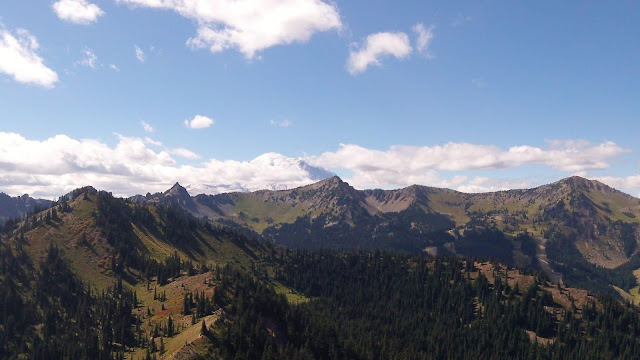 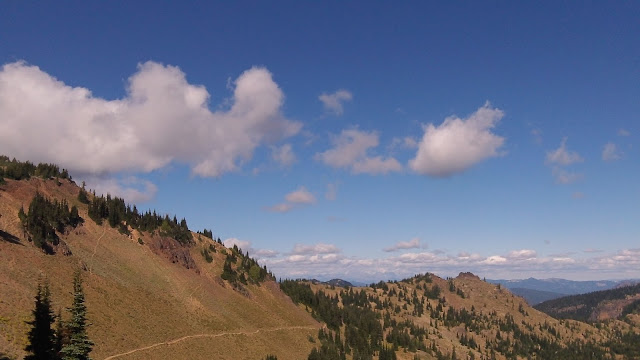 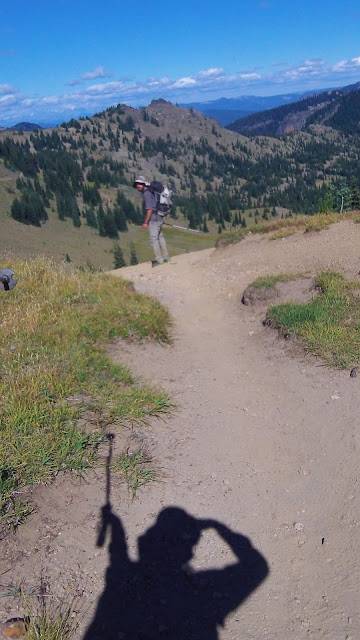 Now the day was drawing to a close, and we searched for a place to camp. We saw a marked campsite with a spring about a mile ahead and made for it. When we got there, on a slope among a thicket of young trees, we saw a few tents set up, including Ken’s, and stopped here. We set up our tent, then sat on the cold ground with Ken and cooked dinner next to each other and chatted. I was glad that we were pacing him, even though he hiked faster than us— I suspect that he enjoyed our company, which is why he stayed within range even though he had started the trail a month after us and had done 25-mile days through the Sierra (!).

Night fell around us, and with it a deadly cold. Ken quickly retreated into his tent, and Zach and I did the same, stuffing ourselves into the sleeping bag and cinching it tightly above our heads. The sleeping pad beneath me felt like ice, and I snuggled next to Zach. That night, despite being wrapped in all my layers, I was so cold that I could barely sleep. 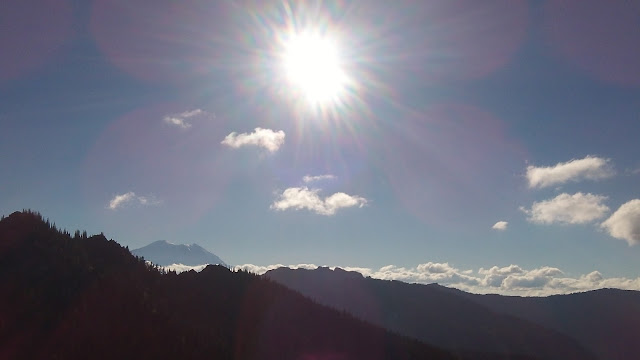