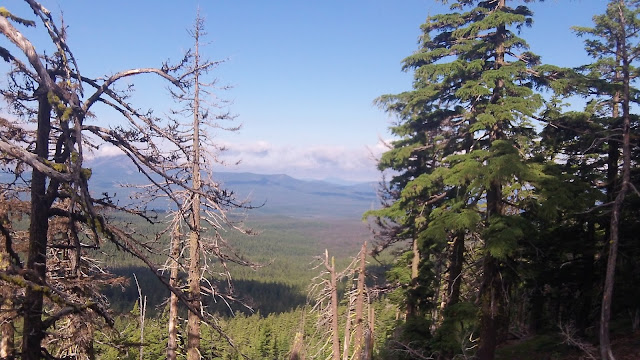 We got a late start the next morning, partly because we woke up late, and partly because we were yakking with the other people. We set out on trail amid a cloud of hikers, and found ourselves tripping into each other a lot until we naturally spaced apart.

On one hand, hiking with people we knew was good for mileage because we’d encourage each other to go just another couple miles to camp at the end of the day. On the other hand, it was hard to get up from a snack break when you were having great conversations! So it was that we loitered away a good chunk of the morning on a grassy slope along the trail with Stumbles, Lobby, and Trinket. Trinket, Stumbles and I are all teachers, so we talked about the funny things that our students say. The sun was out today, making the air a bit hot, so it just felt good to lounge.

On this day, I began to feel footsore— the tendons in my feet ached whenever I walked. This shouldn’t have been much of a surprise, considered that we’d walked well over 1800 miles, but this felt more serious than anything before. It wasn’t exactly on a level that could be reasonably labeled “pain,” but it wore on me, and I felt a bit grumpy and anxious as I walked along, wondering if my feet would hurt like this for the rest of the trail.

We hiked through a consistently beautiful landscape, featuring pleasant pine forests when we were in the shade and rolling green mountains in all directions when we crossed a ridge. 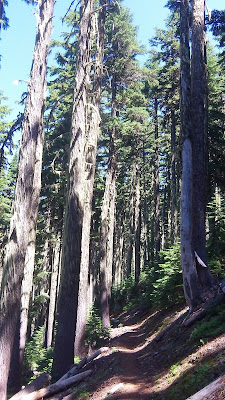 Once again, we found ourselves loitering at a snack break, talking to Stumbles and Happy Nomad and Butterfly about the next moral dilemma of the trail: there was an alternate route ahead, a good ten miles shorter, called the Oregon Skyline trail. A lot of hikers were taking it, it had more water, and several southbounders have raved about how incredibly beautiful it was, especially one of the lakes. And it was tempting to take off half a day’s walk, especially since we were now racing to get to Timothy Lake in northern Oregon in time to see Zach’s sister Ivy. If we didn’t get there by August 24th, we’d miss her because she was going on a trip. On top of that, the Skyline Trail had been the official PCT route until they’d rerouted it several years ago.

That clinched it. Zach and I decided we were going to take the alternate, and furthermore decided to not feel guilty about it. When he returned from gathering water, we set out on the trail, looking for the turn-off.

The junction was at a dusty jeep road with camping nearby, and we paused here to gather water and chat with Gingersnap and Stampede, looking at a bulletin board where hikers had left each other notes. Someone had posted a drawing of a chipper 50’s-style lady saying, “CHOCOLATE— because candy doesn’t get you pregnant!”

Zach and I walked down the road, following a confusing maze of dusty paths (we kept an eye on our GPS) until we reached the junction of the Oregon Skyline Trail. We hiked into a wood of young trees, and ended up finding a place to camp near the Nip and Tuck Lakes. We set up camp on a sandy area between slender trees and a few older ones, with gray skies above us.

We laid in bed and read The Silmarillion, thankful that our sleeping bag had finally dried out. That night, I dreamed that dinosaurs attacked our tent.