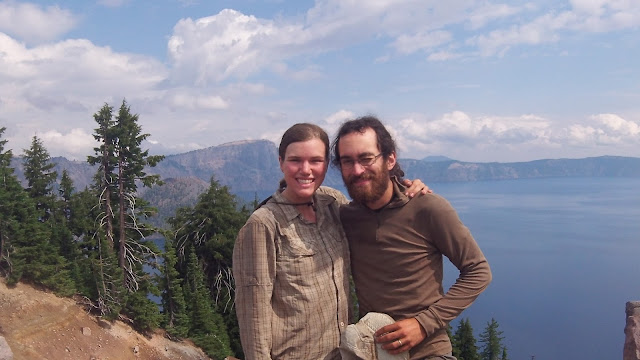 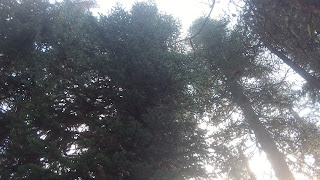 At last, around 10:00, the rain slacked off, then disappeared, and Zach and I hopped out and packed up our muddy gear, muddying ourselves royally in the process. Still, with a morning sun beaming through the rain-drop-glistening trees, it was hard to be grumpy.

We walked quickly, taking the “Hiker PCT” route, as opposed to the “Official PCT,” an equestrian route that doesn’t go along the rim. We tackled one of the harder climbs we’d faced yet in Oregon (we’d gotten soft since the Sierra), huffing and puffing in the humid air. 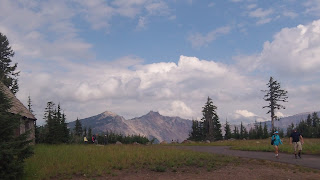 At last we crossed a parking lot, and saw a huge building like the ones at Mazama Village. We stopped there first to see if there was any food, but again found the cafe food too expensive for our taste. I looked around the gift shop, looking at all the photos of the lake, and at last bought a postcard to send home to Mom and Dad. In some ways, reaching Crater Lake almost felt like a bigger landmark than the Oregon border.

Zach and I stepped outside and ran into Zen Dawg, who was doing yoga outside the gift shop and drawing a lot of strange looks from tourists. We said hi, chatted a bit, then walked down a long sidewalk to a wall.

There was Crater Lake! Like most events you look forward to your whole life, it wasn’t quite how I imagined it— the lake was more silver than blue under the cloudy sky, and although I could cognitively grasp that it was huge, the jagged rim around its border gave me no sense of scale. Still, I was thrilled to see it! Zach and I read the informational signs, trying to imagine what it would’ve been like to see Mount Mazama, as huge and majestic as Mount Shasta, blow its top half off. No wonder this was a sacred site to the Native Americans. 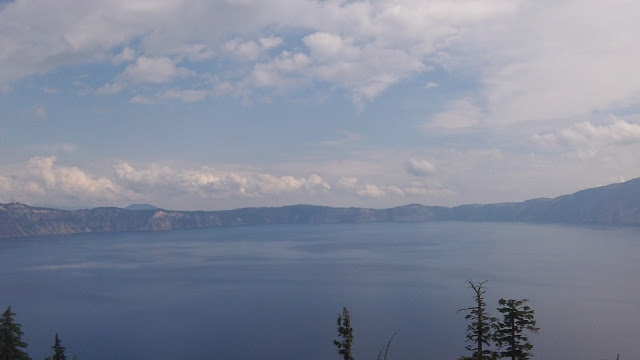 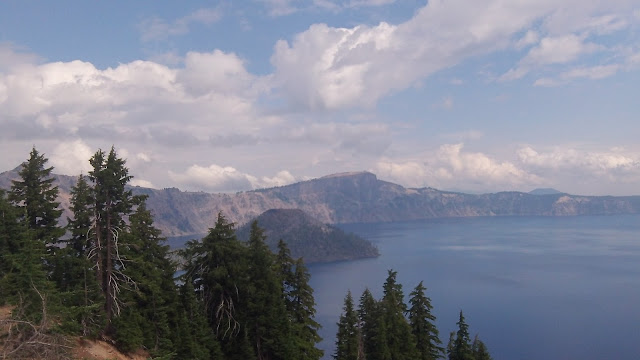 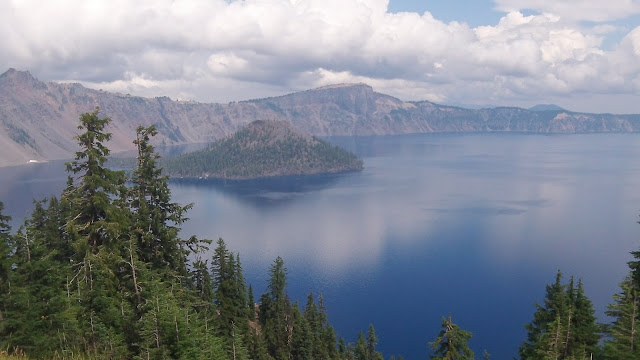 Zach and I were in no hurry to leave, and I was hoping that the sky would clear and we’d be able to see Crater Lake’s famous cobalt color. So we strolled along the rim, past flocks of tourists and along stone walls. We paused and ate bagels, a hiker box score from yesterday, spread with olive oil and parmesan. Some of the tourists looked at our shabby clothes and backpacks in confusion.

We did get some patches of blue sky, rendering parts of the lake a pretty but subtle turquoise, but this change in the weather was accompanied by huge thunderheads forming. Before we knew it, we saw gray rainclouds blowing in— at eye level. It was easy to forget that we were over 7,000 feet above sea level, making the weather affect us more directly than I would like. 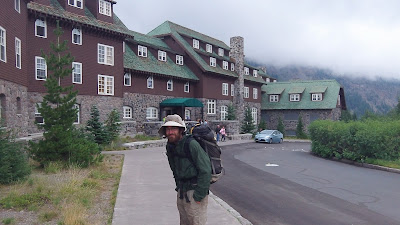 Zach and I debated for a moment, then high-tailed it toward the Crater Lake Lodge— allegedly hikers and other tourists were allowed to hang out in the common room. The clouds swept in, obliterating the blue sky, gathering in huge misty shreds and shrouds all around us. We barreled toward the lodge, a work of stone, brown wood, and green roofs. 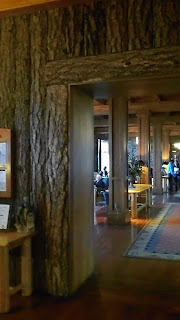 It began to rain on us as we walked, and when we stepped inside, we were both damp and a little chilly. The common room was huge and high ceilinged and pieced together with impressive logs, some still with the bark on them.

Two great hearths sat in the center room, but they were blocked by hoards of cyclists, all looking wet and cold as well (I think there was a tour group of them— there were a couple dozen, and they all seemed to know each other). Zach and I sat down self-consciously in some overstuffed chairs and looked outside as the rain turned into a downpour.

As usual when we didn’t have any hiking to do at the moment, Zach and I had no idea what to do. We wandered around the common areas of the lodge a bit, looking at a historic display about the lodge (short version: it was really horribly engineered from the start, it nearly collapsed several times, and at last they spend a few million dollars completely rebuilding it because of its historical significance). We looked at the restaurant menu, but decided that elk chops ($42) were not in our budget, so we ordered a hot chocolate instead. I chatted with a couple tourists while Zachary sipped the hot chocolate until it was half full, then returned to the bar, topped off the mug with half and half, and came back. 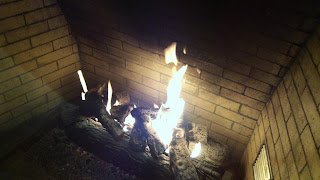 Sometime during this, it began to hail. Once again, beads of ice rained down on the outdoors, pelting the row of rocking chairs on the deck. Zach and I watched in wonder, feeling sorry for any hiker who was outside and not inside with the hearths and a bunch of wet cyclists. The lake was now shrouded in cloud, making it hard to see any distance. Lightning flashed close by.

I sighed. “I really hope this lets up.”

“Yeah…” Zach said, then went to go top off the hot chocolate with more half and half. 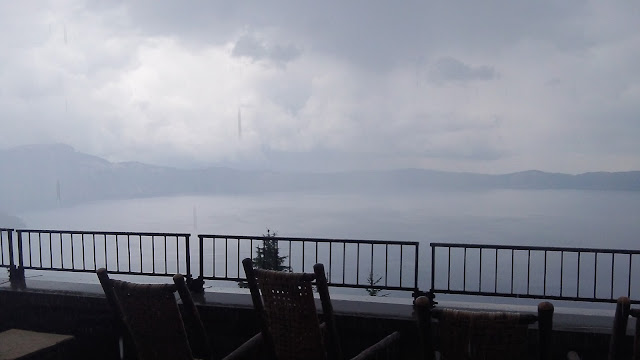 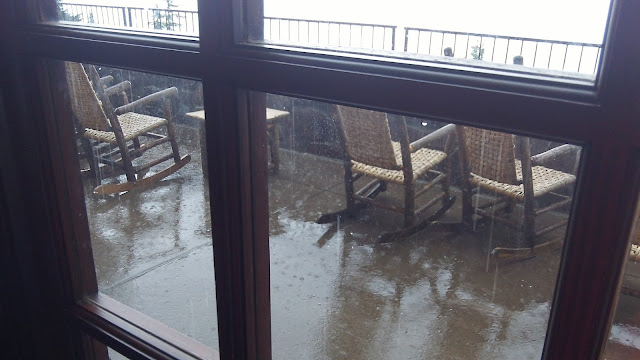 At last, the weather did let up, at least for a moment. Zach and I stepped outside onto the back deck in the wet, chilly air, the melting hailstones slipping beneath our shoes like tiny marbles.

Under a gray sky and constantly-morphing clouds, we hiked toward the rim trail, a path that proved to be a constant dramatic up-and-down along the steep rim of the lake. Far, far below us, Crater Lake’s color changed in the different light, shimmering silver. We also saw a stream of smoke rising from the forest between the lake and the rim. Even such a huge body of water wasn’t immune from fire. 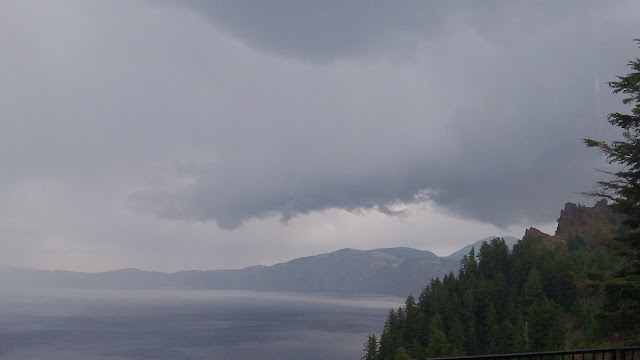 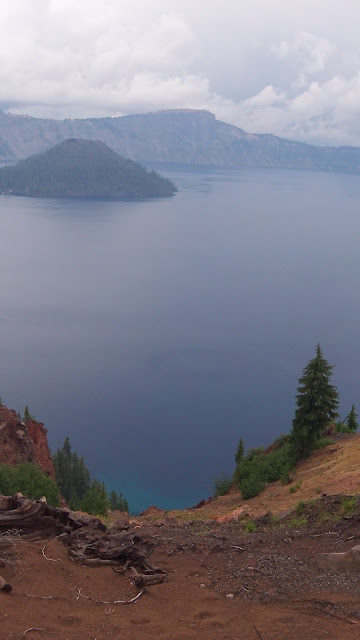 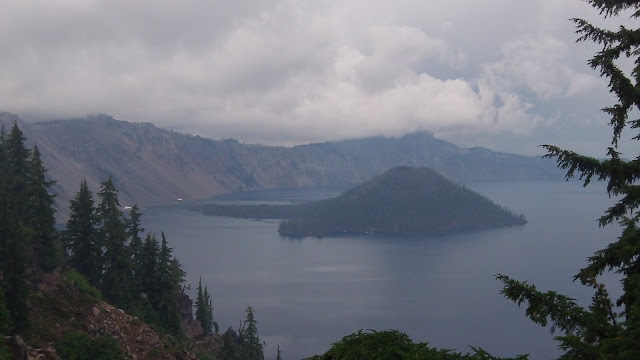 At last we paused at a junction of a trail that led to one of the only places that camping was allowed: Lightning Springs. We debated: should we just give up and camp here, or should we try to hike further? If we hiked on, we had to hike until we reached the Equestrian PCT again, in several miles. But thunder was rumbling, and rain began spitting on us. Even though we hadn’t even gone ten miles today, we decided to play it safe and camp here. Besides, tomorrow I wanted one more shot at seeing Crater Lake under a clear sky.

We turned off down the Lightning Springs Trail, zigzagging through an alpine meadow into pretty Oregon forest. We found a flat campsite among the pine needles and Zach worked on setting up camp on the wet pine needles while I trekked to the nearby spring to gather water. The water itself was frigid, and when at last I returned to Zach, my fingers felt like ice cubes. I slapped them and hugged them in my armpits, trying in vain to get them to feel like hands again.

Still, the sun came out, and we huddled in a patch of late-day sun through the trees. Zach cooked dinner and we ate quickly— hot food had never tasted so good. We were eager to climb into our tent and let our shivering warm up the sleeping bag.

Nestled in the slightly-damp polyester, Zach and I watched our breath go up in plumes. It was going to be a cold night. Still, we decided that we would begin the next book we planned to read together: The Silmarillion by J.R.R. Tolkien. Zach began reading, and I was swept away to a story of gods and demons and angels, a breathtaking world I had never read before.

When Zach finished the chapter, we snuggled in, breath still steaming, and closed the sleeping bag above our heads. Despite how cold I felt, I was soon asleep. We both slept like rocks.