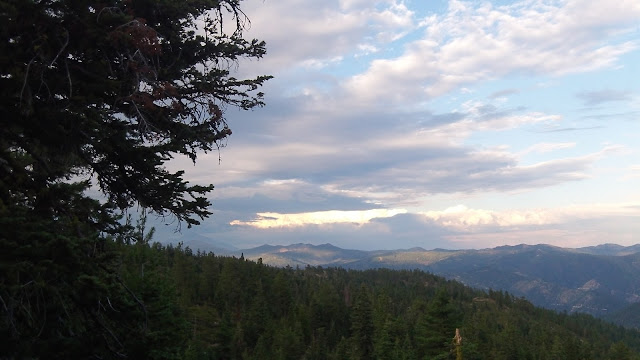 We woke to feel a cool breeze ruffling our tent, something that hadn’t happened in days. We sat up to look out at Deadfall Lake, gray underneath the cloudy sky, rippling softly in the wind.

FIG JAM was already up and packed up, and we said goodbye as he hiked out. We lingered a bit, gathering water from the lapping shore, eating breakfast, and packing up. With cool weather on our side, we were determined to book some more miles today.

The trail, winding between boulder fields and over barren ridges, was fairly flat, making it easy to plow through miles. The mountains fell away, first green, then blue, then white-tipped in the distance, and we saw rain and storm clouds off to our left.

As we turned a corner, Zach pointed ahead and we saw, rising over the ridge, a tiny stream of smoke. It was white and plumed up gently. We looked at it for a while, then Zach said, “It looks like a fire.”

I nodded, but this didn’t really register at the moment. I had never seen a forest fire before, and so I had no mental category for it. The billow looked so tiny, so harmless, that I viewed it with a casual, almost theoretical interest, and we hiked on without giving it too much thought.

At last we left the mountain ridge for a forest. Zach was a bit nervous today, feverishly calculating our miles left to our next resupply at Etna. After listening to him shuffle the numbers for a while, I told him to stop because he was making me stressed.

It was late afternoon when we came to Highway 3, a small highway that delved through the woods. When we walked up, we found Ché and FIG JAM standing by the side of the road, talking to The Animal and a woman we didn’t recognize. The woman was about my age, with shortish blonde hair and a turquoise dress decorated with a bold pattern.

The Animal turned. “Oh, hey guys!” He quickly filled us in on what had happened:  he and this woman, named Stumbles, had been hiking together today, but when they hiked further into the woods, they saw that the billow of smoke we’d seen earlier was very close to the trail. “I don’t know if it’s actually dangerous,” The Animal said, “but I promised to meet my girlfriend in Etna tomorrow and I don’t want to have to backtrack twenty miles and miss the date!”

Stumbles had decided to go back as well— they were going to try to hitchhike from here to Etna instead of risking it.

“Do you think it’s really dangerous?” I asked.

The Animal shook his head. “I don’t know.”

I looked at Stumbles, and she shrugged. I didn’t think much about her at the time,  not realizing that she would become one of our best trail friends.

We said goodbye, and Stumbles and The Animal stood by the side of the road with a sign that said, “ETNA.” Ché, FIG JAM and we decided to sit on the opposite shoulder and think about what to do.

Soon Stumbles and The Animal got a ride, and we waved goodbye to them. Now it was the four of us sitting on the side of the highway. How could we possibly tell how bad the fire was ahead? Was it near enough to the trail to be worrisome? Should we go on?

FIG JAM rolled a cigarette, puffing on it thoughtfully. The four of us talked in circles about the fire, then gave up on the subject and began chatting about other things.

As we were sitting there, a car came pulling up, and a middle-aged woman hopped out. “Hi guys!” she said. “Would you like some soda or beer?”

“Yes please!” we all said, and jumped up. She introduced herself as “Mama Leo”— “My son ‘Leonidas’ is thru-hiking,” she said. “I ran some drinks to him but I have several left over.”

We each grabbed a soda, and, when she insisted we grab more, everyone helped themselves to beer as well. She wished us luck and drove off. 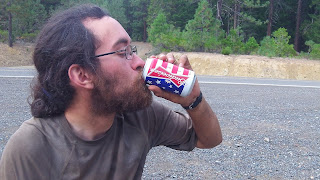 Just then, a truck came lumbering out of the campground road behind us. Two guys were in the cab, and rolled down the window. “Hey, you guys want some beer?” Zach jumped up to grab their offering of stars-n’-stripes Budweisers.

No sooner had that truck driven off than a lady in a car pulled up, rolled down the window and called, “Would you like some peanuts?”

We laughed, loaded up on packages of peanuts and waved goodbye to her. To cap it off, a fourth car drove by. The guy pulled down the window and held out a smoldering joint. “You guys want a roach?”

We all laughed, and when the guys drove off, we waited to see if someone would pull over and offer us caviar. However, the road was deserted now.

“So what are you guys doing?” we asked.

“Me too,” Ché said. “Besides—” He pulled out his map. “We’ll be crossing another road tomorrow morning, if we need to make a quick exit.”

That sealed the deal for us, and we decided to go on as well. Ché and FIG JAM were going to hang out here for a while.

“Don’t worry,” Ché said with a twinkle in his eye, “if someone pulls up and offers us some pizza, I’ll pack out a couple pieces for you guys.”

“Thanks!” we said, laughing.

Zach and I began hiking into the woods, barreling up a sharp ascent. Clouds rolled in as we hiked, and soon it began to rain on us. I pulled out my umbrella and trudged along. We saw deer in the forest, who watched us furtively from the undergrowth.

However, the rain, while quite a downpour, didn’t last enough to soak anything, and soon we hiked out of the rain and back into sunlight. I began to understand why such a drizzle wouldn’t even phase a forest fire. 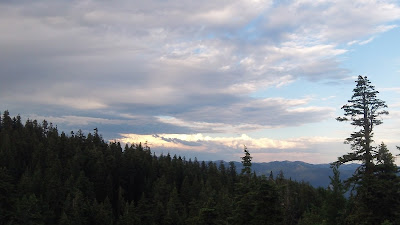 We gathered water at a small pipe spring, and since we were in a hurry, we decided not to filter our water for the first time on trail. After all, it was piping straight out of the mountainside. We hiked a couple more miles, then found a nice campsite under conifers near a little grassy marsh and ate a dinner of chili wrapped in tortillas. It was nearly dark by the time we crawled into our tent.

That night I woke up to hear footsteps circling near our tent. I froze for a second, every muscle tense, listening to the way the footsteps snapped the twigs. However, it took me only a moment to figure out that it was a hoofed animal— a deer. Huh, I’m getting better at this, I thought. Then I went right back to sleep.