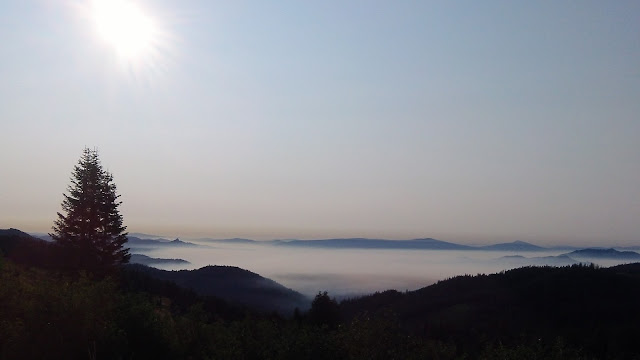 With our arrival in Oregon, my body sort of collapsed. Some force of will had been spurring me on until now, but today, the goal had been reached, and I could no longer sustain my body. I woke up very late, and even when I was awake, I didn’t remotely feel like hiking.

Stumbles and Alex were long gone by the time Zach and I started lethargically packing up our bags. We could see the mountains in front of us, blue in the early morning light— they were islands rising from a sea of settled white smoke. The sky above, though hazy, was blue.

I decided to call home, and learned that the day before, one of my dear friends had suffered a horrible, traumatizing experience. I talked to her, my mouth dry, my heart racing. She was safe now, but I was seriously shaken up, and that feeling lasted all day.

It was late morning by the time we started hiking, Zach trying to comfort me and me trying not to brood or worry. 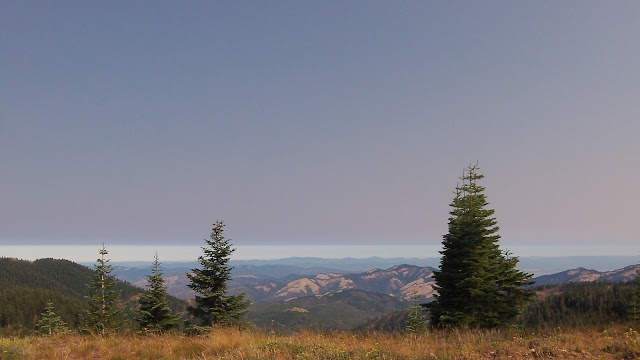 The landscape was open and sunny, with wide views of the mountains all around. The haze of smoke still lay in the sky, but it was clearly just residue from the earlier fires. We could see a strip of blue sky far in the distance, with an oppressive sheet of gray smoke settled in the atmosphere above it. We hiked through these open mountains, and Zach listened to a TED Talk and then told me about it.

A few miles in, we discovered a little soda cache for PCT hikers in the shade of some brush. It was our first trail magic welcome to Oregon, and we gladly sat on the lawn chairs and drank soda.

As we were sitting there, I saw a little bit of ground moving a few feet away, and a second later, some sort of small mammal’s snout popped out! It was followed by a little bare head with tiny bright eyes— I’m still not sure what it was, although I think it was a mole or vole or some kind. As we watched, it began digging out dirt, spilling it out of the hole, then sealing up the hole over its head. It was fascinating to watch! 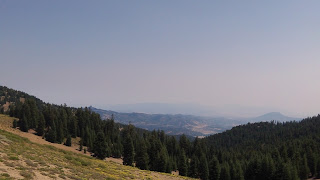 We slogged along for a while, leaving the ridges behind for a forest. We ended up sitting and having lunch with Alex, who borrowed our solar charger. She was getting into Ashland today and ending her section hike. In our chatting, we asked her what she did for a living.

She smiled a bit sheepishly, and you could tell she was trying hard not to make her answer sound snobby. “I’m a scientist at Harvard.” We learned that her PhD program was having her work in the field, trying to study the causes of macular degeneration in mice. Pretty exciting stuff! 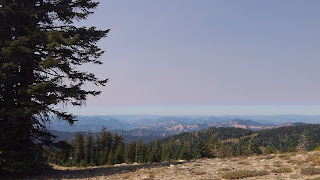 We parted ways and plowed ahead, skirting the edge of someone’s property with a million NO TRESPASSING signs and glaring tiki heads. We hadn’t gone very far today, but my feet ached and stung.

We stopped by a highway to sit at a picnic table and drink water, and I felt completely exhausted. Zach suggested that we camp close to Calahan’s Lodge, our next resupply point, so we wouldn’t have to walk far to get there tomorrow. We were planning to hitch into Ashland tomorrow to eat some food and see the sights, then hike out at the end of the day. 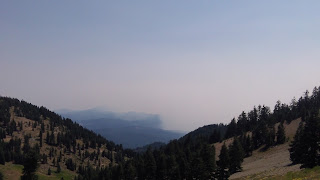 The trail went up and down over small hills, which felt like torture with my aching limbs and feet. We managed to find a campsite between an old jeep trail and a paved road, surrounded by bushes. I watched Steller’s jays hopping around and wondered if any bears or deer would hassle us tonight.

Zach cooked supper, I massaged my stinging feet, and then we crawled into our tent and passed out.