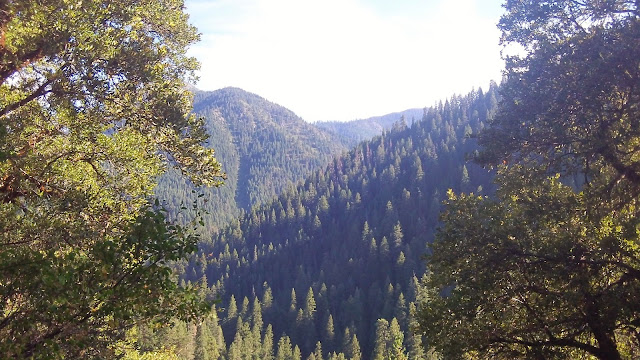 We got off on the wrong foot the next morning— we woke up when the sun was already soaring high in the sky, and everyone else was long packed up and gone. Zach and I gobbled down breakfast, threw our stuff together, and walked across Quincy-LaPorte Road, which was still deserted, and found the trail on the opposite side. A sticky heat was already lingering in the air, and the sun, even in spatters through the trees, felt merciless.

Still, the scenery was nothing to complain about: we were winding our way up and down steep mountains in a dense wood, with views of the fir-cloaked landscape opening up through the trees. The trees kept us from bearing the brunt of the sun, but it was still more humid than I would’ve liked! 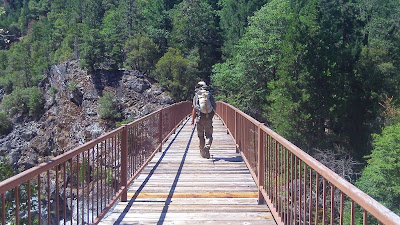 Something that I had noticed before, and noticed particularly on this day, was the beauty of rotting stumps. Seriously. The dead trees in this part of the country had mostly died of old age rather than fire, and been left to quietly decompose, which they did in a number of fascinating ways: sometimes dissolving into spongy shreds, sometimes splinters, sometimes ragged layers of bark and xylem. My favorite was a particular kind of tree that decomposed into something that resembled a massive 3D jigsaw puzzle, with little pieces of wood interlocking as gaps widened between them. Details like this fascinated me.

We ate a mac n’ cheese meal for lunch, and afterward, hiking on a full stomach in the heat, I began to feel sick. We saw that we were approaching a largish river called the Middle Fork Feather River, and when we came to a steel bridge and saw a wide shallow river rushing beneath it, we decided that we were going to take a break to cool off and swim!

Catdog was already down at the bank, and we clambered down to join her. We all dabbled our feet for a while, then Zach and I took off our outer clothes and waded in. The water was swift but not too cold. We washed our socks, splashed our skin, and laid in the current and felt the water move over us. We even dipped our hair in the water, letting the current pull out some of the dirt. 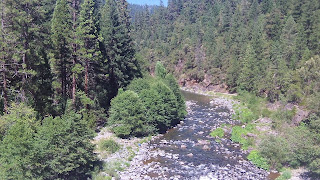 At last, dripping, we made it back to shore and hung our laundry to dry on our backpacks. It was getting late in the day, so we hiked just a bit further, searching for a place to camp.

At this point I was still wearing my shorts. Most people on trail wore them, and with the increasingly hot weather I was wondering if it might be a good idea. However, in just the couple miles that I walked, my legs got scratched and covered in rashes and bug bites. I vowed I was going back to pants first thing tomorrow morning!

Finding a campsite was difficult in this narrow valley. We at last found a spot next to Catdog and another hiker, and set up next to a stream with them. A thick heat settled in, not relieved by the onset of night. I was hoping that all northern California wouldn’t be like this. Still, in the wilderness with no climate control, I would much rather be too hot than too cold— I’ve gotten heat exhaustion plenty of times, but hypothermia seems scarier.

I laid on my sleeping pad, in the tent and safe from mosquitoes, while Zach cooked. I was feeling drained and exhausted. We laid down on our sleeping bag, trying not to touch each other because we were too hot. Then we drifted into a sweltering sleep.