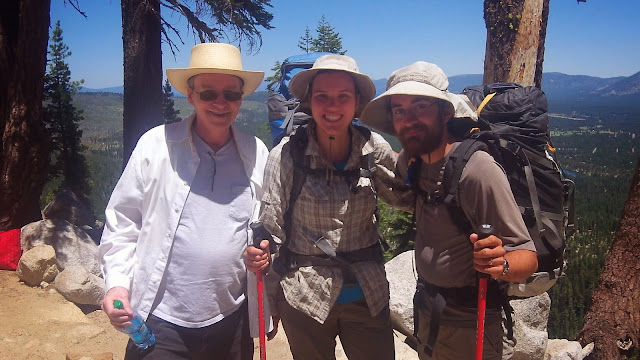 Today was the day we’d return to trail, and I woke up excited. This actually surprised me— as previously mentioned, I assumed that if we ever got off trail for any length of time, I would never go back. On the contrary: today I felt well-rested, well-fed, and pawing the ground to get back into the adventure and conquer the last 1,560-ish miles.

Grandma Kathy made sure we had a good breakfast to send us off: bacon, eggs, and bagels. I also ate some ice cream, just ‘cause. We checked to see how much weight we had gained during our week there. I had gained five pounds. Zach had gained ten! Grandma’s Fat Camp had worked!

With many hugs and goodbyes and unsuccessful attempts at selfies of the group, we said goodbye to Grandma Kathy, then threw our stuff in Grandpa Ray’s car (he was driving us). Then we were off.

It took a couple hours to get there, and I watched the scenery whizzing by, knowing that I wouldn’t see a landscape at this speed for a long time. We traversed the desert center of California, where the grass was brown and the landscape treeless, then slowly started climbing into the mountains. Soon all was covered in firs and craggy rocks and picturesque mountain streams. I was so excited I could barely sit still. A week off had done wonders for my ability to appreciate nature.

We had decided to restart the trail a mile from where we’d been picked up, at Echo Lake Resort rather than the highway shoulder, because Grandpa Ray wanted to park and hike a few miles with us. We drove down a narrow set of roads and finally found a parking spot at the resort, which stood next to a huge, glittering lake.

Grandpa Ray took us inside and bought us sandwiches. When I ordered, the girl behind the counter asked, “What name should I call when it’s ready?”

I hesitated a second, then said, “Leftovers.”

We sat outside and ate, chatting with some other hikers who were there (and seemed suspicious that we were thru-hikers because of how clean we looked). One of the people there was a short woman, with breezy gray hair and a reserved smile. Her name was Catdog, and we later learned that she was 63 years old. She had hiked the Appalachian Trail ten years ago, and was now finally here to snag her second long-distance trail. I admired Catdog at once and hoped that I would be that awesome (and physically fit) when I was that age.

At last, after we were fed, Zach and Grandpa Ray and I started walking on the trail. It was a very popular day-hiking spot, as evidenced by the scores of people walking very slowly on the single-file trail. The trail skirted the northern edge of Lower Echo Lake, then Upper Echo Lake, before diverging. You could hop on a water taxi back to the main resort from several points along the way, and Grandpa Ray decided that’s what he would do.

We hiked up a steep hill. I had expected hiking to be murderous after a week of lounging around, but at first it wasn’t too difficult. With a pack on my back and a trekking pole in my hand, my body knew exactly what to do. Instead of jerking along like a strange marionette, I walked with the easy motion of someone who’s taken a step like this a hundred thousand times.

As we got near the top of a pass, we could see Lake Tahoe in the distance, very blue and solid-looking. I was excited to see it again, and happy to learn later that this would not be our last view of it.

Now we hiked along the side of a ridge, with the high mountains rising to peaks on our right and the slope going down to the lake on our left. We hiked a bit slower than usual, and Grandpa Ray kept up well (although he kept pausing to take pictures). The further we went from the resort, the fewer tourists there were.

At last, we paused as a sign that said, “Water Taxi” with an arrow down a trail, and we said goodbye to Grandpa Ray. We thanked him again for everything that week, sent our love to Grandma Kathy, and then he hiked down the trail, and we continued walking on the PCT.

We hiked for a few more minutes, then sat down and had a snack. We’d gone a grand total of about three miles, but we both felt like we could just sit down and camp right here. Despite our initial enthusiasm, we were definitely a bit rusty.

We were now headed into the section of trail that we didn’t know much about: northern California. A sign alerted us that we were entering, “Desolation Wilderness,” which didn’t sound very welcoming. We’d heard that there were lots of mosquitoes. And then what after then? Our resupply points had names without any reference in our heads: Sierra City, Belden Town, Old Station, Castella, Etna. I looked over our resupply list again. “Holy cow,” I said. “We only have five resupplies left in California!”

On one hand, it was almost mind-blowing how far we’d come. On the other, taking a week off did have some psychological effects. “Right now,” I told Zach, “I feel like we’re the last people on trail. Everyone we know— everyone we’ve been hiking with— is ahead of us.”

“I know,” Zach said. “It’s going to be weird to see all the people who were behind us the whole trip.”

At last we got up again and hiked along, slowly. We wound deeper into the woods. While we were there, we ran into Phil and Ashley (whose real names I still can’t remember!), who we’d first met searching for a water pump in the desert, and seen again crossing Forester Pass. I greeted them with joy, and we all chatted. It was good to know that some of the people we knew were still here.

After walking through a pleasant forest for a while, we walked out into a huge open area, marked with white rock. Here, a massive lake lay like a sea of diamonds before us. It dazzled my eyes, blue and breathtaking, stretching from us to a distant ridge of mountains speckled in snow. 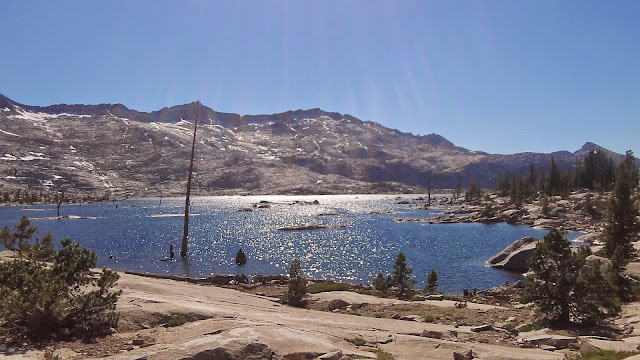 We had reached Lake Aloha, a crowning jewel of the Desolation Wilderness. The trail skirted it for a while, so we had a chance to admire its beautiful for a couple miles. This was a popular place for camping as well, with many people set up with large tents, sitting on the white boulders, playing their guitars. I wondered how this marvelous wilderness had ever gotten such a negative name. If this is what the Desolation Wilderness was going to look like, I was all for it! 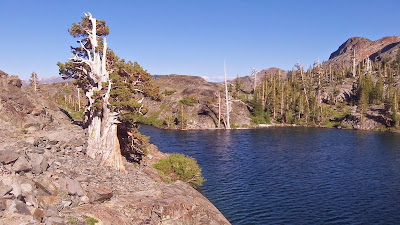 After a while we left Lake Aloha behind, but the trail wound around several lakes, each of them stunningly bright and blue. We chatted with some other hikers as we walked, a couple who introduced themselves as Dawn Patrol and Star Rider. At last we found a nice campsite, perched atop a flat knoll with a view of neverending rows of pine trees and craggy mountains, near a clear stream.

Since we were at a mere 8,500ish foot elevation, we had high hopes for a warm night tonight. We set up our tent without the rainfly, and then Zach cooked supper: clam chowder that his sister Ivy had sent for my birthday, along with some of our pasta. It tasted divine. Then we crawled into our tent, read Lord of the Rings together, then slipped into sleep. During the night I only came to the surface once to look up at the stars, warm and winking, which would be our roof for the next three months.