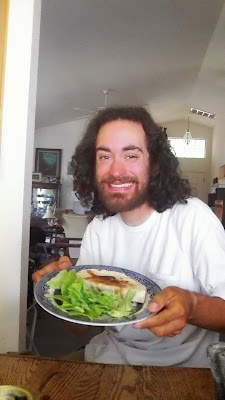 I woke up to see morning light streaming in the window. I blinked for a moment, staring in fascination: this sight which had been so normal my whole life now seemed somehow alien. Zach was still asleep, and I studied his face, trying to adjust to his tamed hair, his smoothed-down beard, and his freshly-scrubbed skin. It all seemed so surreal.

I felt like I had slept in ridiculously late, but when I checked the time it was only 7:00. I don’t wake up at that time in normal life, so that was weird too. After a few seconds, Zachary woke up as well, and we both wandered, like sleepy children in the midst of a dream, out into the living room.

Grandma Kathy was already up and cooking breakfast: bacon and eggs. I attempted to pet her cat Carli, who suffered a pat or two, while Dixie watched me, wild-eyed, from the doorway.

Our first order of business was to weigh ourselves. Grandma Kathy pulled out a scale and Zach hopped on. He had started the trail at 172 pounds, was now 149. I thought Grandma Kathy was going to cry again. “You two aren’t leaving until you gain ten pounds!” she told him, heaping a plate full of bacon and eggs.

“Let me try,” I said, hopping on the scale. At the beginning of the trail I was 164 pounds. Now I was 156. I stared at the number. “Only eight pounds?” I said in disbelief. True, this was mostly because I had started off as much less muscular than Zach, and had gained a lot of muscle to displace a lot of the fat. Still, the fact that I was at a healthy weight after so much hunger and malnourishment made me feel empowered. In a non-hiking situation, most women grumble about how unfair it is that men can lose weight more easily. However, in my situation, where losing weight was undesirable or dangerous, I felt powerful having held my weight so well. Women are built to survive, and I appreciated that in a new way.

Zach stayed at the house that morning, while Grandpa Ray and I drove halfway across California to pick up my sister Mary. She was volunteering at a ranch near Santa Rosa over the summer, and they had schemed to have her come stay the weekend with us. We got stuck in traffic and had to navigate some winding back roads, but at last we reached the ranch.

Even though I had seen Mary more recently than anyone else in the family (since we’d stayed with her in San Diego and hiked the first day of the trail with her), it felt like eons had passed since we’d been together. She sprinted down the hill to meet us, then stared at me as I stepped out of the car. “Dang, chick,” she said, “you are skinny!” 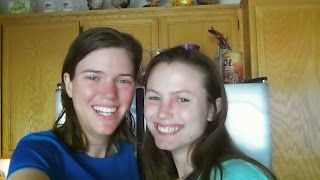 I was so happy to be with her, someone I had known my whole life, that I felt relief flooding me. This week was going to be rejuvenating for me for many reasons.

The three of us drove back to the house together, and then we all ate quesadillas, played board games, and sat barefoot in the air conditioning, eating a constant stream of food and banishing all negative thoughts about the wide and hungry wilderness. It was going to be a good week.