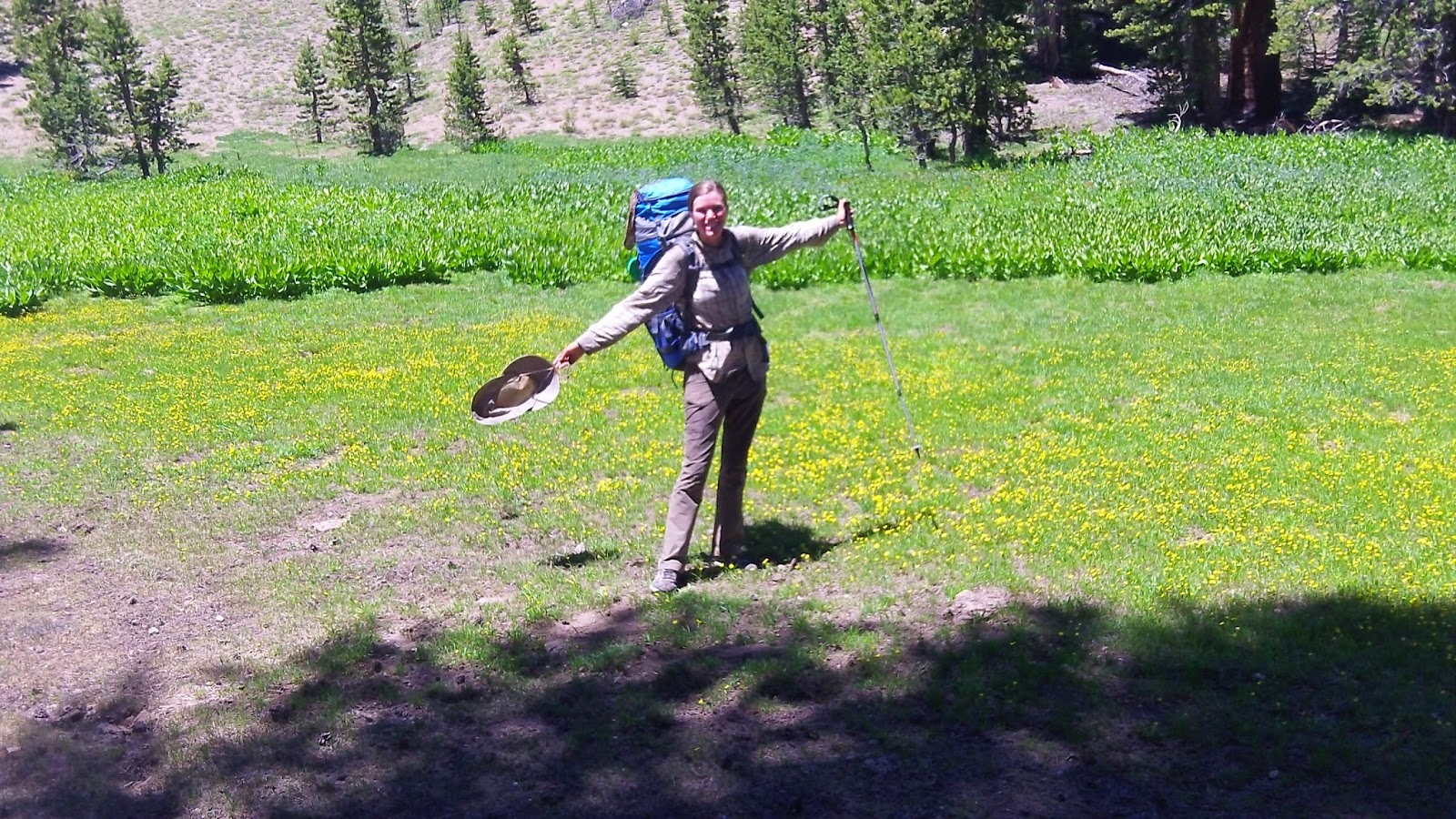 We woke up early that day and felt pretty good again— a trend that genuinely surprised me. We each ate a bowl of granola and got out and back on the trail by 7:00am. 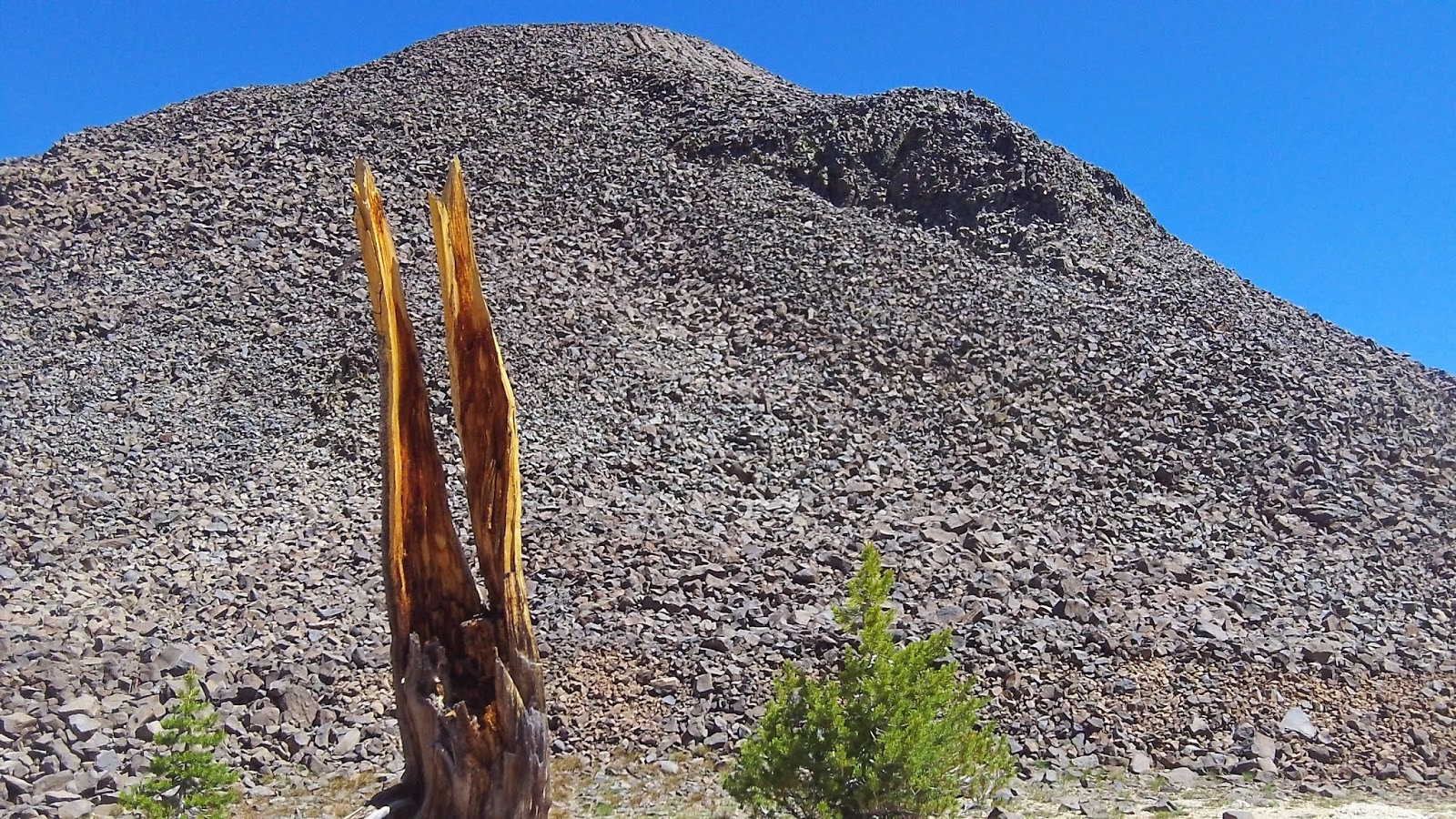 The trail was a bit rough and rocky at first, scooted up against the edge of massive, seemingly random heaps of stone. The path soon turned smoother, though, running through pleasant woods and meadows full of wildflowers (I began to notice that this section of California in June was chock full of colorful wildflowers).

We still felt a bit tired and listless that day, and our hunger was growing, not much sated by our careful rations. All I could think about was food: when our next meal was, what it was going to be, what kinds of pizza we would eat in Sacramento, etc. Zach’s spongey fungus-infected foot was more tender than ever. I took a picture of him with his shirt pulled up to prove how much he was wasting away, and got a bit scared at what I saw— he sucked in his gut to ham up the shot, but it was still frightening how skinny he was! 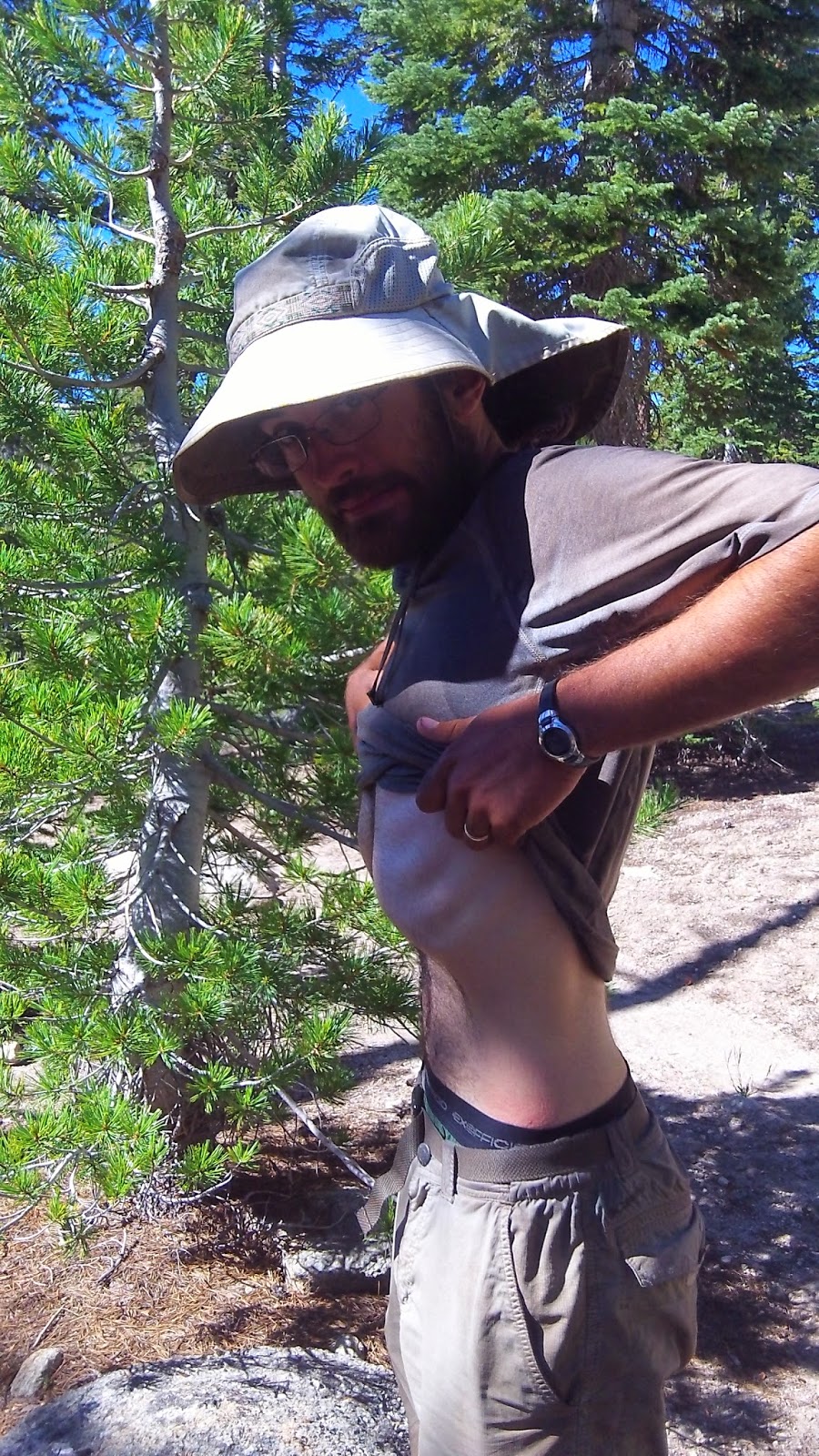 We paused to eat shepherd’s pie. Each meal was tasting better by the day, although at this point I was beginning to comprehend just how incredibly malnourished we were. After that, we continued walking along the easy trail, through open lands and back into forest.

By 4:00pm, we were halfway up a large slope and realized that we had already done 20 miles! We triple-checked our mileage to be sure— we felt like we had been crawling all day. Feeling pleased with ourselves (and increasingly grateful that the hardest part of the Sierra was over), we debated whether we should find a place to camp or keep hiking.

As we were mulling this over, we met a weekend hiker who had walked in from Highway 4, about still seven miles away. He mentioned that he had seen a guy set up there giving trail magic. “He had a grill or something and was making fried eggs,” he said. “He might still be there.”

This was the first trail magic Zach and I had been promised since Walker Pass, and it filled us with unspeakable anticipation. We thanked him and began practically sprinting up the mountain. New life surged into my weak body, and adrenaline spurred us along, gasping for breath, lungs pumping, muscles burning like fire. We blazed past all the hikers in our way. We were on a mission, and none would deter us!

Up one mountain and down the other side we rushed, covering many miles and a lot of elevation gain and loss. The landscape was beautiful as usual: jagged mountains in the distance, wide open space all around us, a forest of conifers in the valley, and a few tough junipers clinging along the side of the trail. 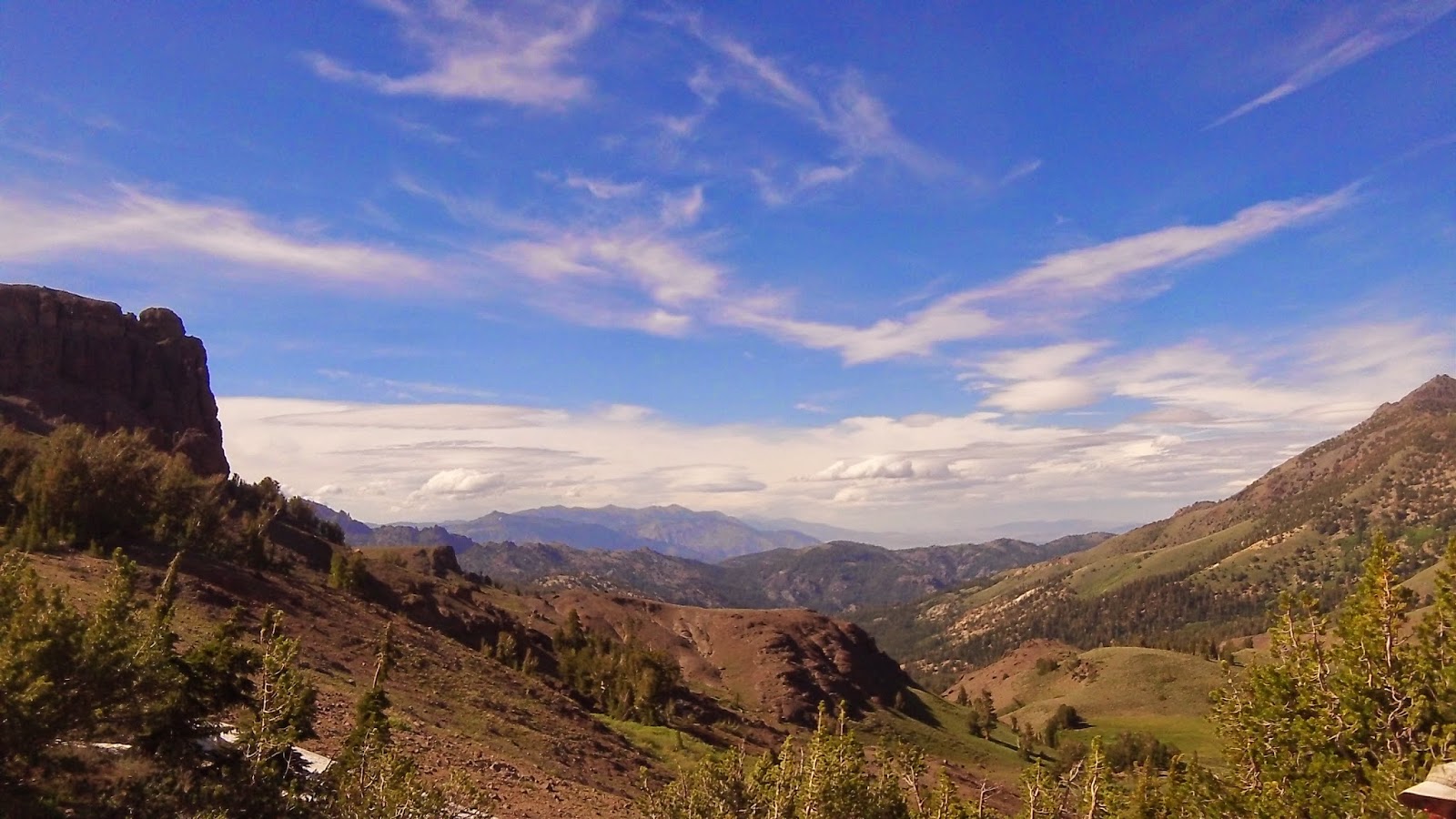 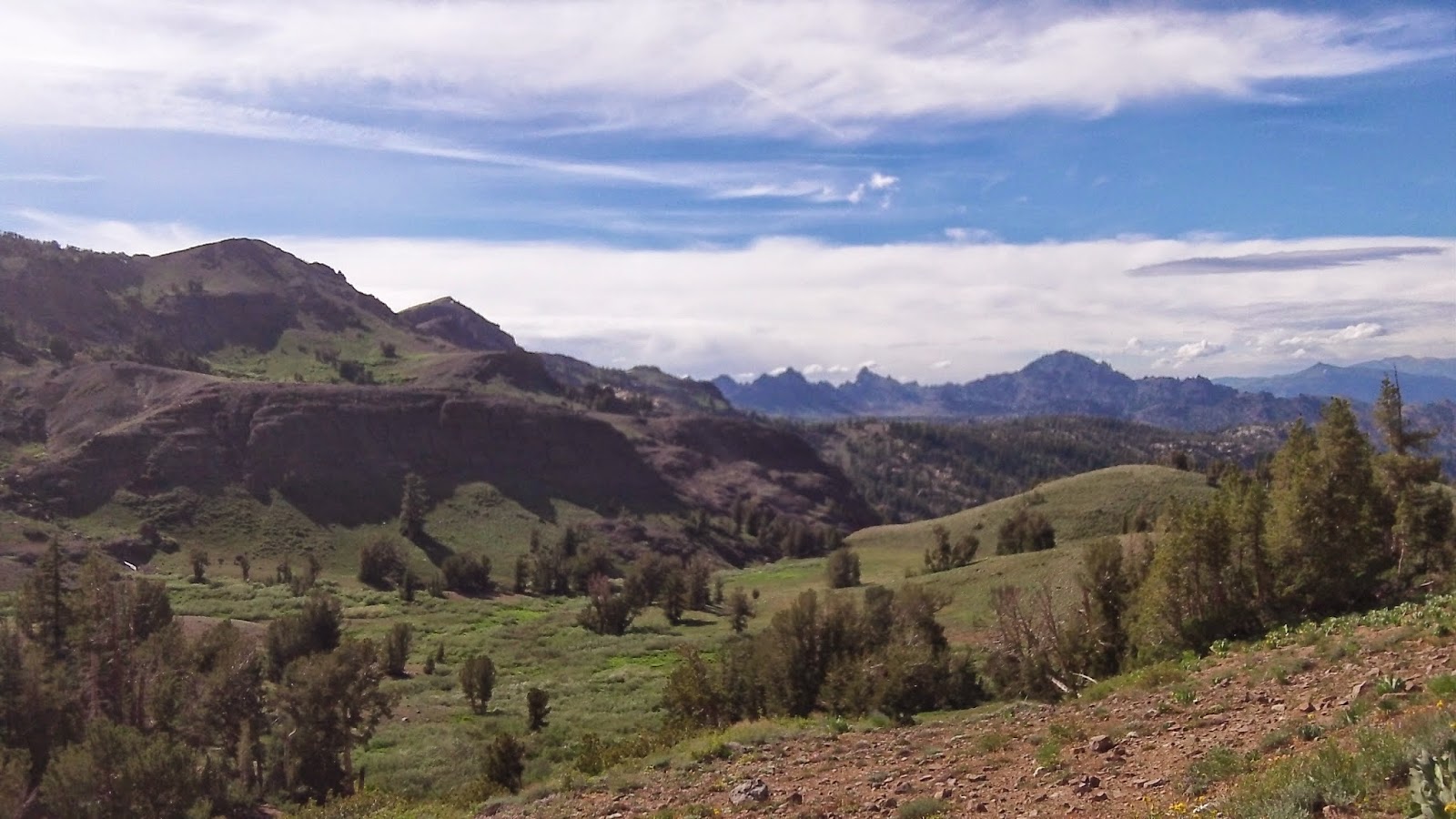 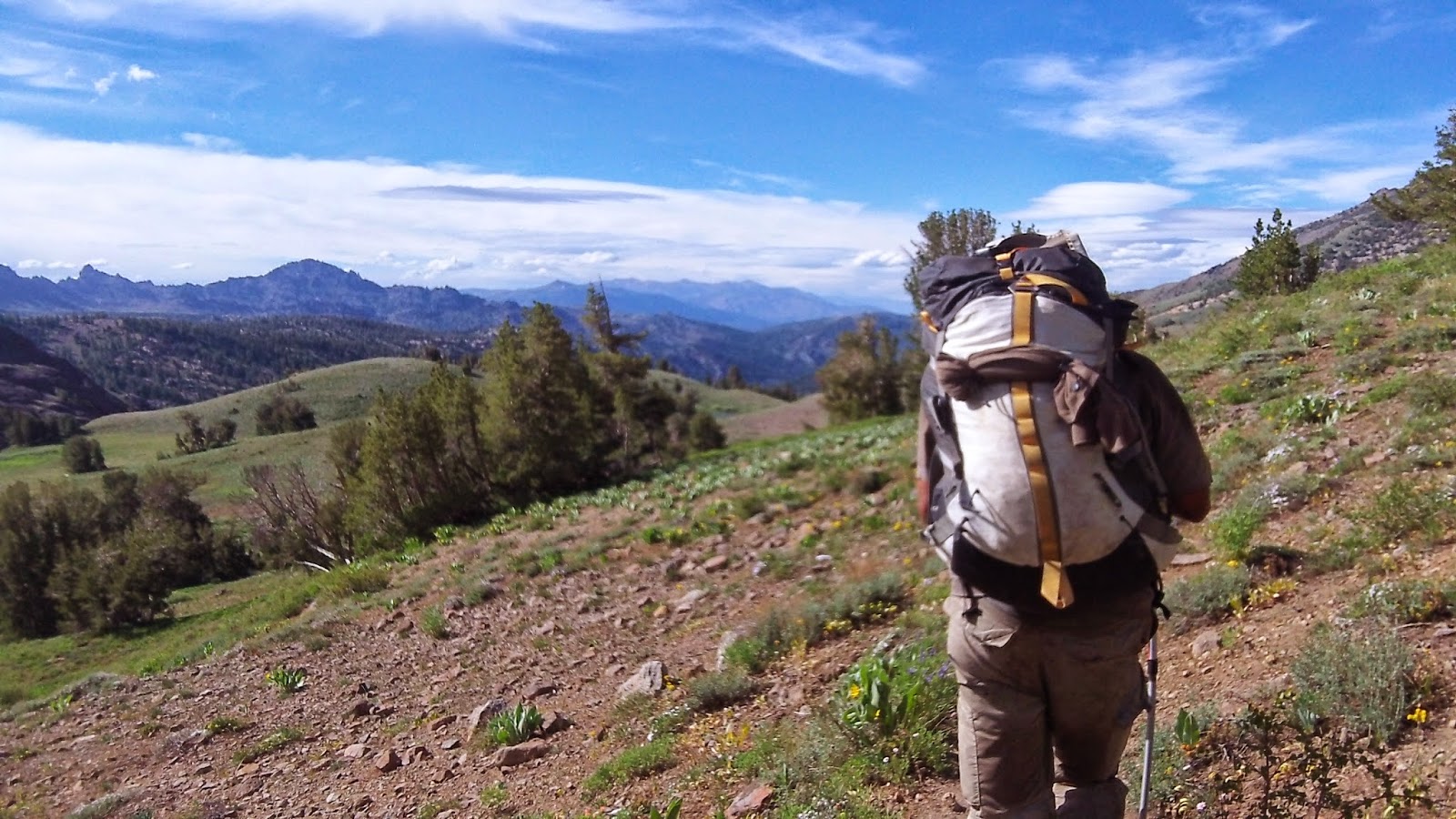 We delved into the woods, but by this time we still had two miles to go and we were almost out of steam. We were also beginning to suspect that the trail magic guy would not be there anymore. Still, the faint hope that he might be kept us moving our tired limbs.

We paused to talk to a man without a pack who hiked in southbound, who asked if we had seen a mother and daughter hiking this direction. We said we had, although we hadn’t stopped to talk to them. He mentioned, casually in the middle of our conversation, that he had hiked all four of the major trails— the Pacific Crest, the Appalachian, the Continental Divide, and the American Discovery (which goes from coast to coast). His wife had hiked all but the PCT with him, and she had recently be diagnosed with Alzheimer’s. She wanted to hike the PCT before she was incapable of it, so she and her daughter were hiking it together while he ran support crew. I was completely floored by how awesome it was. I felt like I was talking to a celebrity, and wished that we had paused to talk to the woman who was accomplishing a feat more amazing than I ever will. But he was eager to meet up with them, so we soon said goodbye and hiked on.

After much up and down, we reached the highway, tucked in the middle of dark woods. It was about 6:30, and the road was deserted. However, we saw a plastic lawn chair across the road with a sign attached to it, and ran over. It said, “Come back tomorrow for hot breakfast, 6:00-10:00. You won’t regret it! ~Chipmunk”

I was hugely relieved that we hadn’t missed the magic. Zach and I limped back a little ways to the nearest camp spot. The wind was picking up, and we spent a long time trying to find a place that wasn’t directly beneath the dead trunks of trees. At last we decided on a spot and set up our tent. I worked on staking it down (using a combination of rocks and sticks, since we still only had two tent stakes) while Zach cooked the freeze-dried buffalo chicken that the section-hiker had given us, which we ate in tortillas. The chicken was tender and flavorful, quite a contrast from the chicken jerky we’d been dehydrating. It was a good way to celebrate our longest day yet: 27 miles.

We crawled into our tent as the wind whipped up and clouds soared in. It was going to be a windy night, but we had the promise of a hot breakfast in the morning. Dreaming of fried eggs, I fell asleep.