The night was freezing. I lay curled up in a fetal position, huddled next to Zach, buried under the sleeping bag, stocking cap pulled tightly over my head, letting out groans anytime a shift made a puff of cold air slide into the bag. The pad beneath me felt cold, and my thin pants did little to insulate me. The feeling of plastic, despite it being much warmer than cotton of the same thickness, made everything feel colder.

When we woke up in the morning, it was still freezing, and it took us a long time before we were willing to get up. By that time, the sun had just started to clear the mountains— which meant it was 9:00 and time to get moving before the day got away from us.

We packed up and hustled through the woods toward Muir Pass. It didn’t take long before we left the trees behind us and journeyed into the wasteland of snow and gray rock, with only occasional fir trees (which had a grayish tinge as well) to bring color to the scene.

We wound our way through tumbled rocks, heading through a cleft between the mountains toward the actual pass. A cheerful, icy stream tumbled down to the left of the trail, and we had to cross it at a shallow spot, and Zach lost his footing and fell in. (He landed on his feet, but he got soaked up to his knees.)

Muir Pass was, as promised, buried in snow, even on the south side. As we walked, we caught up with another hiker who was trying to find his way up a snowy slope covered in footprints. It was Godzilla (Soshi)! We were happy to see him after so many days. Together we scrambled up a large slope, only to discover that we’d gone completely the wrong direction. We consulted our GPS and had to scramble down the slope again and continue on. Marmots chattered at us from their holes and burrows among the boulders. 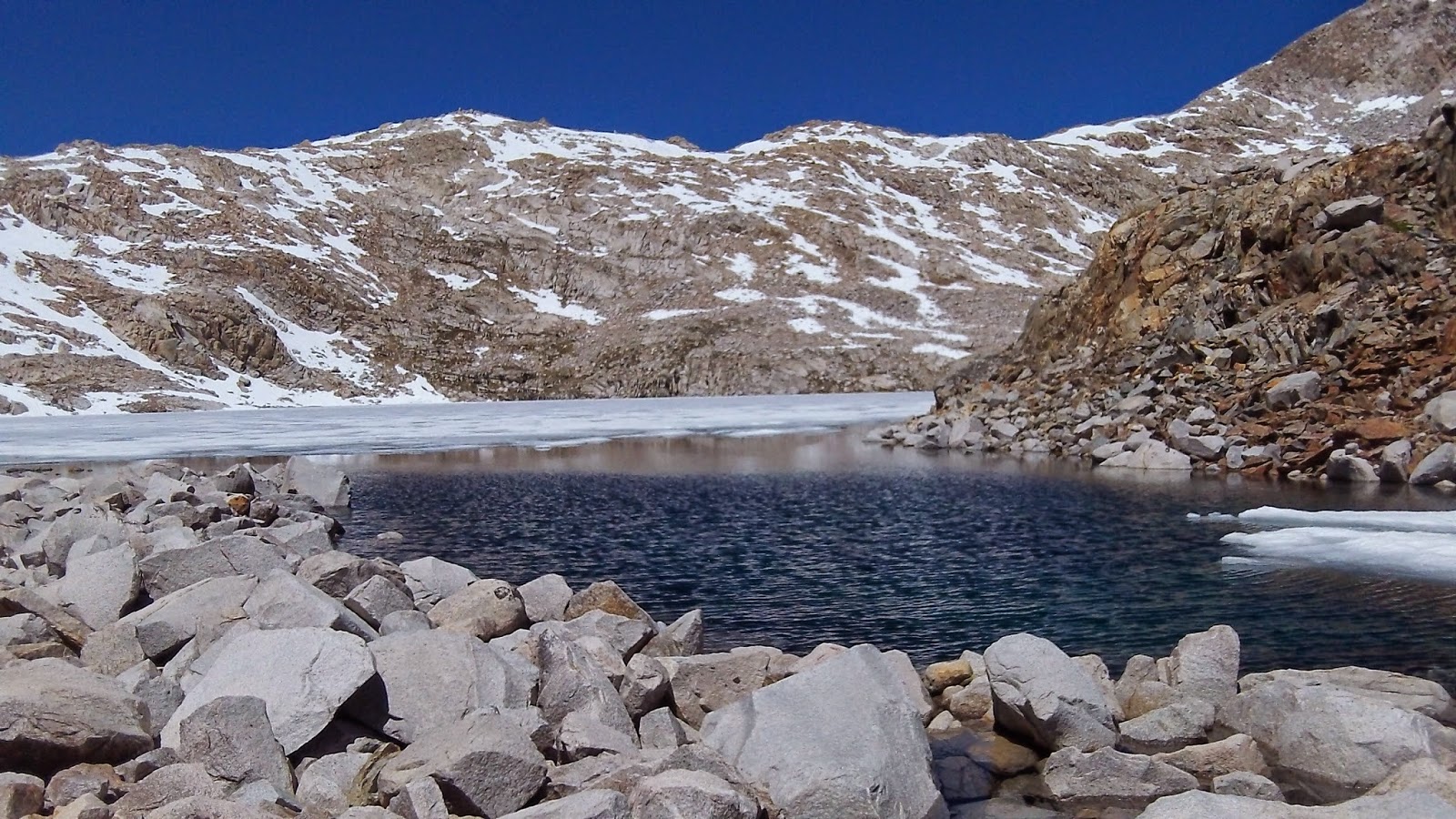 At last we found ourselves on the correct path, and Godzilla hiked ahead of us and soon left us behind. We labored over the fields of snow and along rocky paths. For a minute it looked like we’d have to climb a hill and walk a scary path along a steep snow cliff, but we soon realized that those were the footprints of someone who was lost, and the real path was much easier.

A large number of hikers we talked to later said that Muir Pass was their least favorite, because of the snow, the soft undercurrents of snowmelt that often made them (and us) posthole into freezing water, and so on. But for us, now that we (and especially I) were more confident, we just slogged through it. It was mostly pretty flat, and the snow was fairly firm.

As we were walking across a flat stretch beside a half-frozen lake, we were shocked to see another hiker from the desert. He was limping across the deeply-tracked ice-crusted footprints, gingerly lifting his flip-flop-shod feet from one footprint to the next.

“Paja?” I asked in disbelief as we walked up.

“Leftovers!” he said in his Miami accent, smiling.

I stared at his red, swollen feet. “You never got shoes?”

He chuckled a bit uncomfortably. “It is very hard to walk on snow without shoes.”

We wished him well and continued on, and we never saw him again. Later, when we asked other hikers about him, they said that he had dropped out at the beginning of the Sierra. When we told them we’d seen him at Muir Pass, everyone was surprised. I never actually found out what happened to him.

An hour or so had passed, and we were still struggling to reach the top of Muir Pass. The last little bit involved scrambling up a steep snow bank, marked by icy indents of footprints. At this point I wasn’t afraid, but I was so hungry that I was nearly delirious. I was feeling incredibly weak, as if my strength was detaching from my body and floating away in the overwhelming snow-reflected sunlight. Zach kept on checking to make sure I was okay, but I just struggled up behind him, sometimes collapsing, always getting up again. 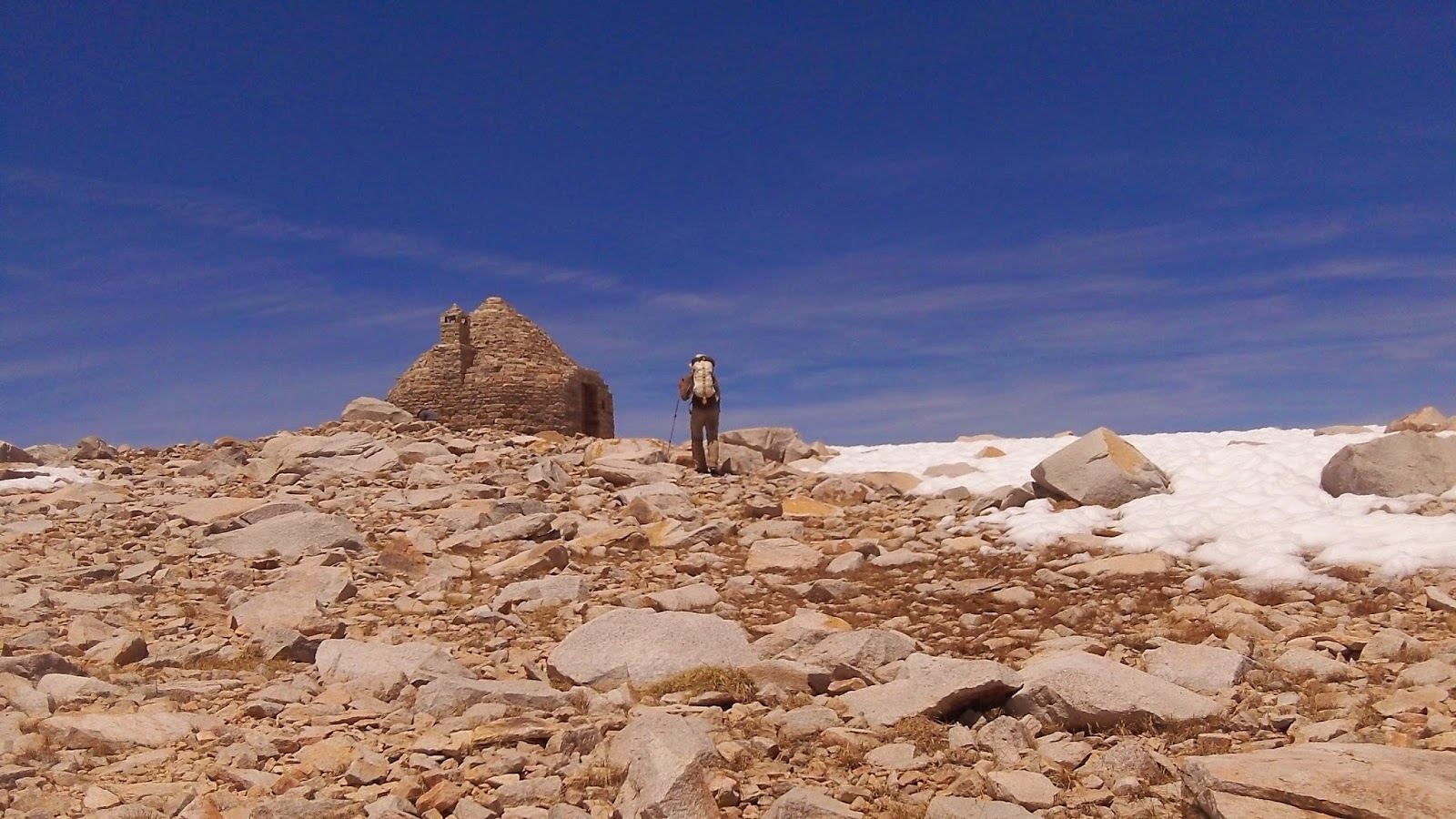 At last, we reached a boulder-strewn ridge with an old stone hut rearing up from the boulders: Muir Pass! A few hikers were sitting there, and clapped us in. Godzilla was there, as well as Sugar, and a man about her age whose name I can’t remember (I’ll call him Dan).

We looked in the hut first, which the Sierra Club had constructed in honor of John Muir. It was a dim igloo of stones, cool inside, with strict signs warning people not to stay there unless it was a true emergency. We stepped back outside to eat our reward snack: half a Snickers bar.

The others watched us curiously as Zach carefully broke a Snickers in half, compared the mismatched sides, nibbled a piece out of the bigger one and handed it to me, as was our ritual. Sugar asked about our snack supply. I sighed. “We lost one of our meals,” I said. “So we’re on really strict rations right now.”

Sugar and the man made sympathetic sounds, but neither of them had any food to spare, either. However, Godzilla immediately grabbed his backpack and pulled out a ziplock. Inside was a fruit bar and two packages of smashed Pop-Tarts. “I will not eat these,” he said. “Would you like them?”

Taking food from JMT hikers who had overpacked was one thing, but accepting food from a fellow thru-hiker was another. “Oh my gosh, are you sure?”

“Yes,” he said. He made a face. “Pop-Tarts are too… sweet.” He held up what he was eating instead: a peanut-butter-and-honey tortilla wrap with raisins. We didn’t protest anymore, and immediately each ate a smashed s'mores-flavored Pop-Tart.  At home, Pop-Tarts taste sickeningly sweet to me. At this moment, they tasted like the best food that had ever existed.

“Dan” said that he had hiked the John Muir Trail twice, so he knew this area pretty well. “I’m following you,” Sugar said. We looked to the north and saw what she meant: it was a waste of snow, mud, and widely-scattered footprints; it was impossible to tell where the trail went just by looking. But Dan knew this area well. When he left, we followed.

We followed Dan as he cut a straight line across the gently-sloping ground, passing between two frozen lakes, and schlocking through mud until we finally joined up with the PCT again. We paced Dan and Sugar for a while, as the trail wound through a gray, white, and blue wasteland. We skirted the edge of a huge lake, frozen in the middle, with crystal-clear blue water on the edges, so you could see the undercarriage of the ice near the shore. I was fascinated by this arctic beauty. 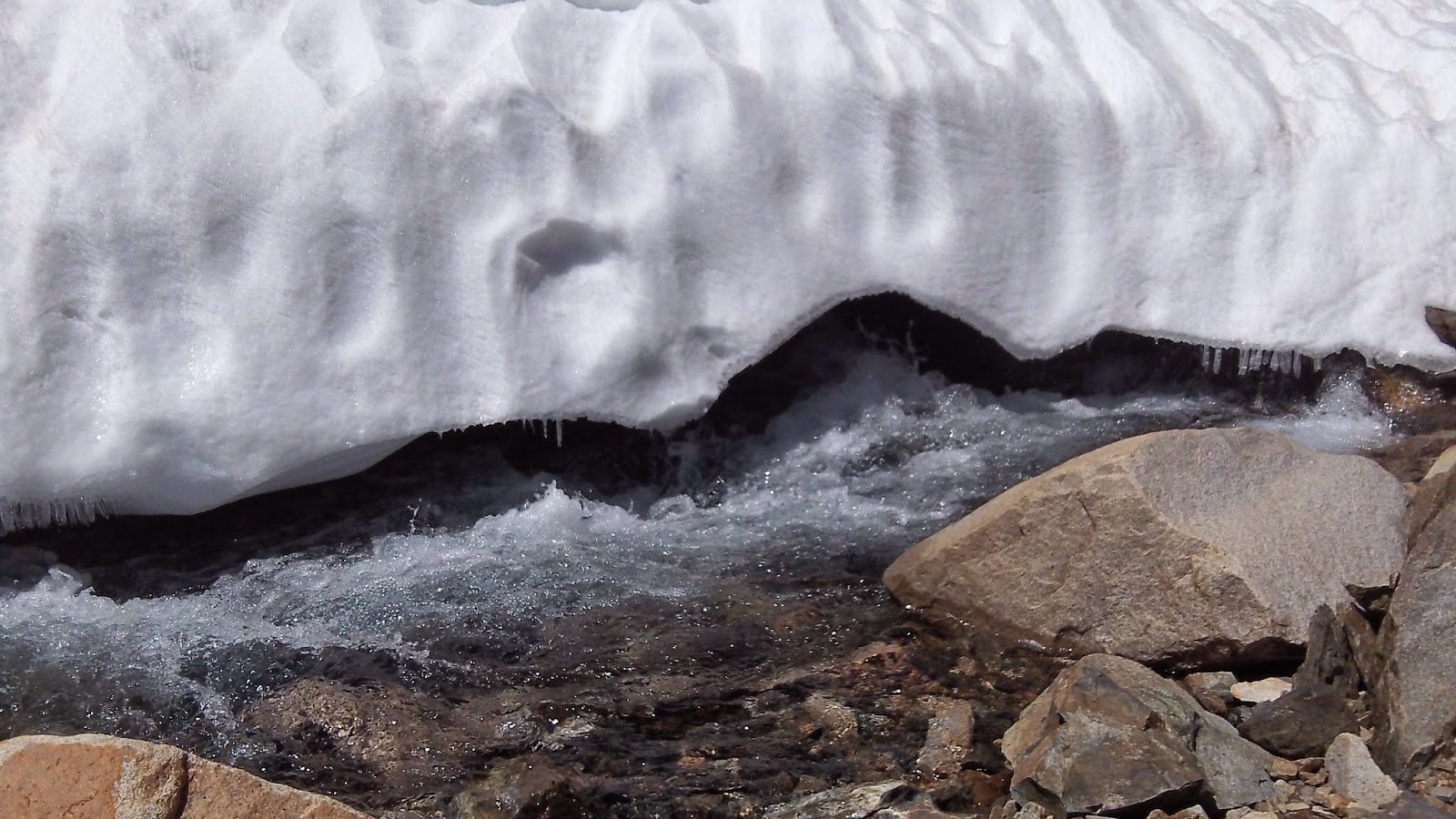 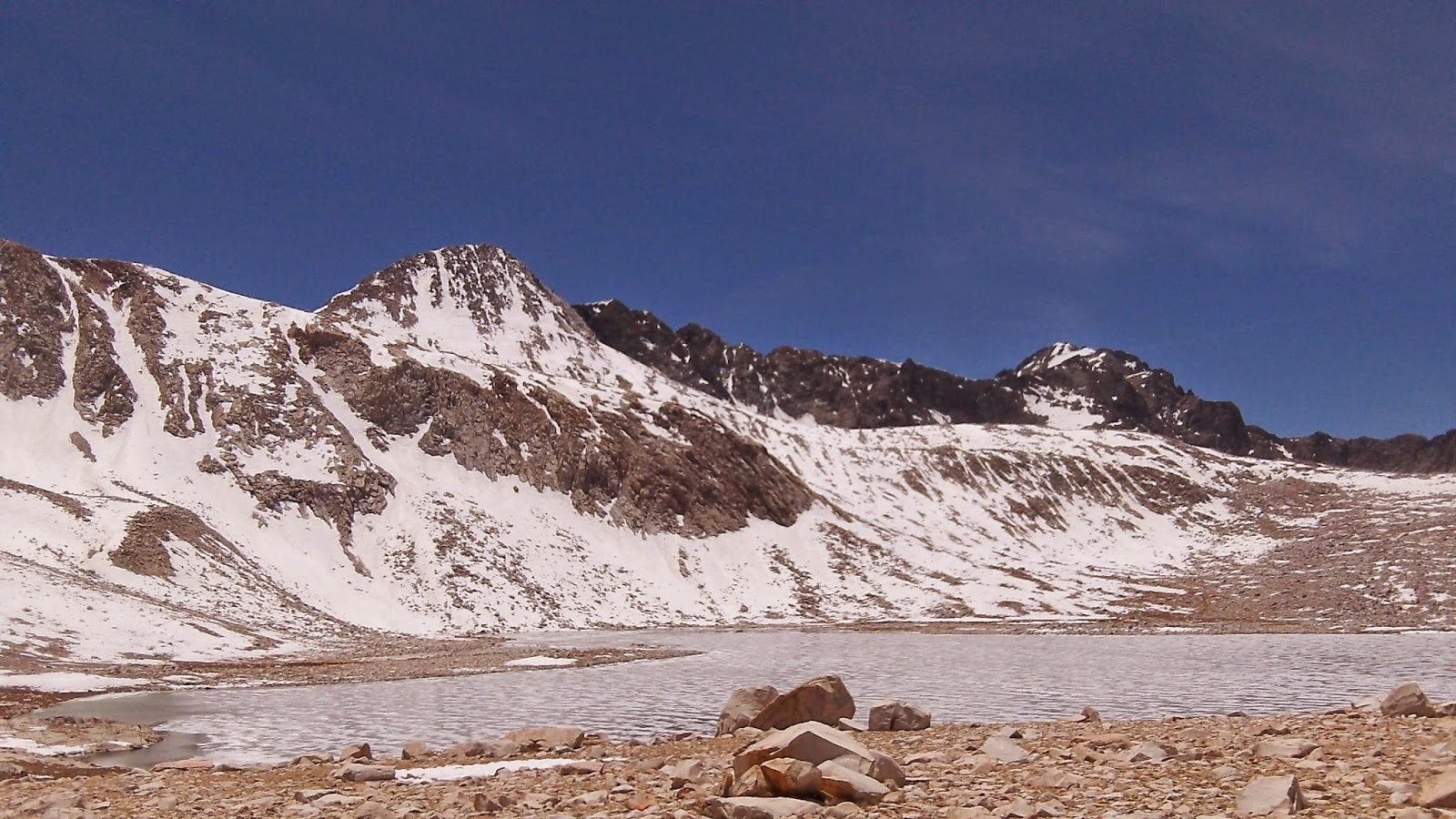 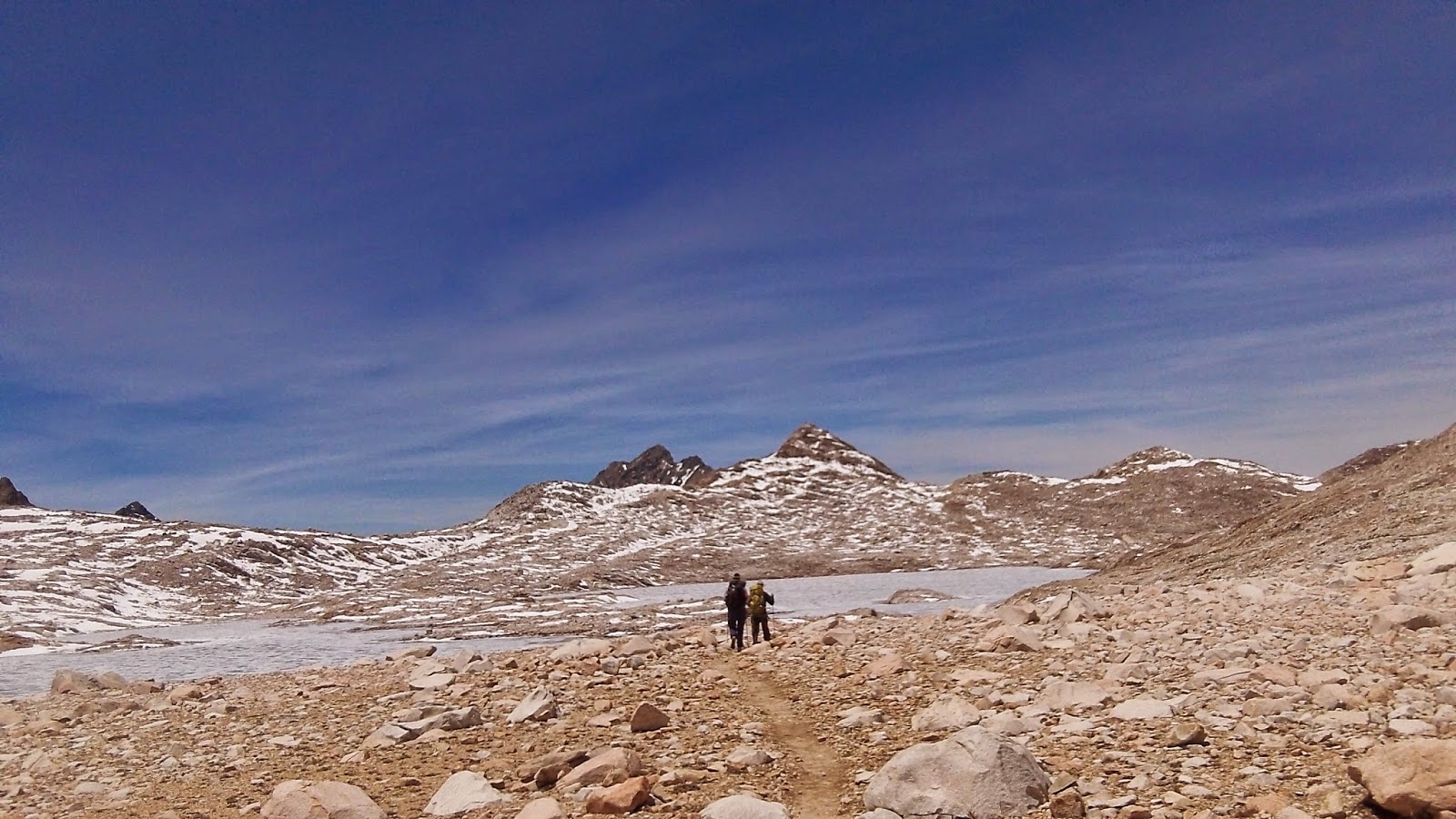 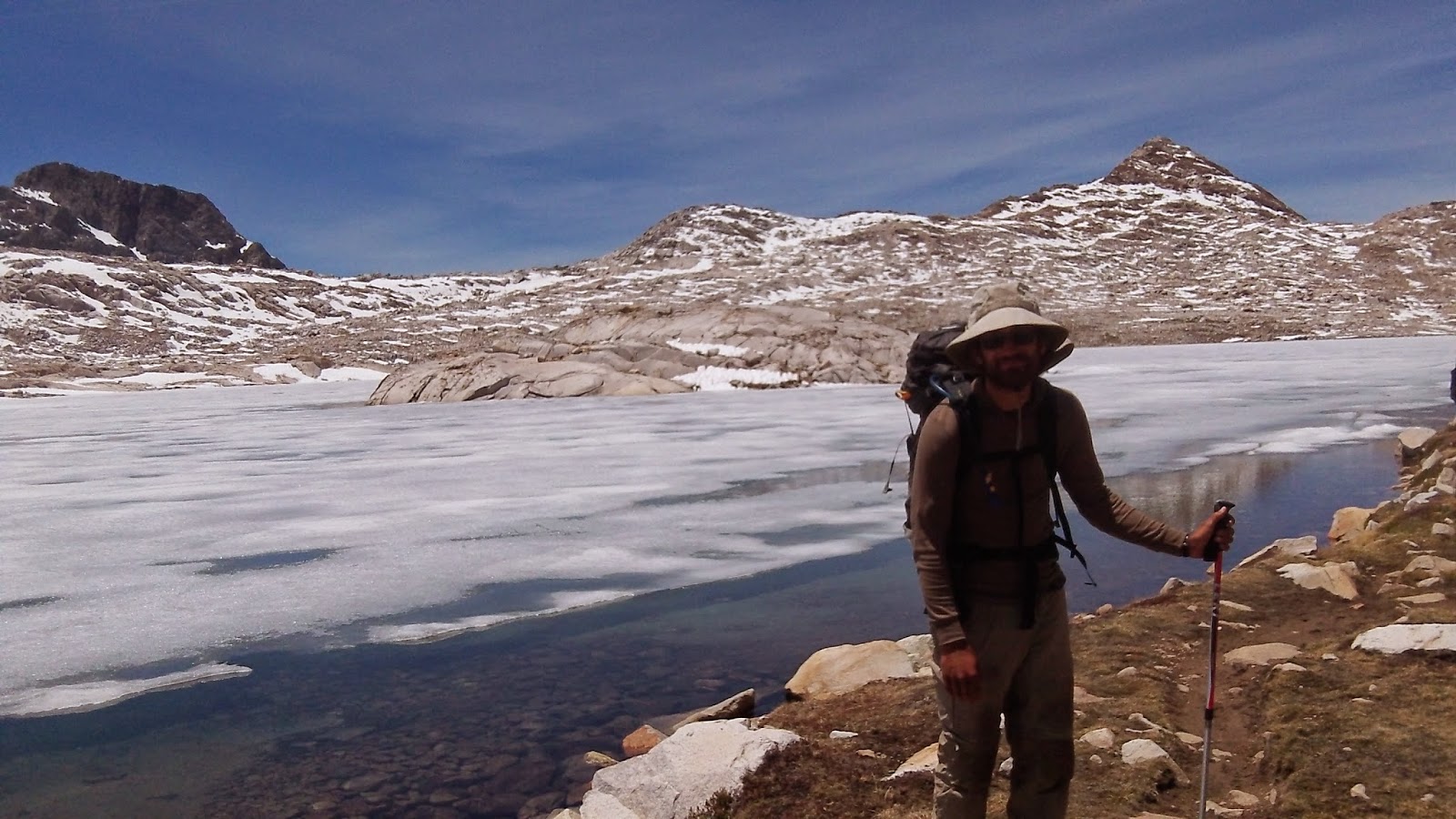 At last we left the icy world behind and plunged into a place that many people consider to be the most beautiful section of the John Muir Trail: Evolution Basin. This is a chain of lakes in a wide valley, surrounded by verdant fields that stretch out to the tumbled whitish-gray peaks that rise up on every side. To us, it looked about as pretty as anything else we’d seen. 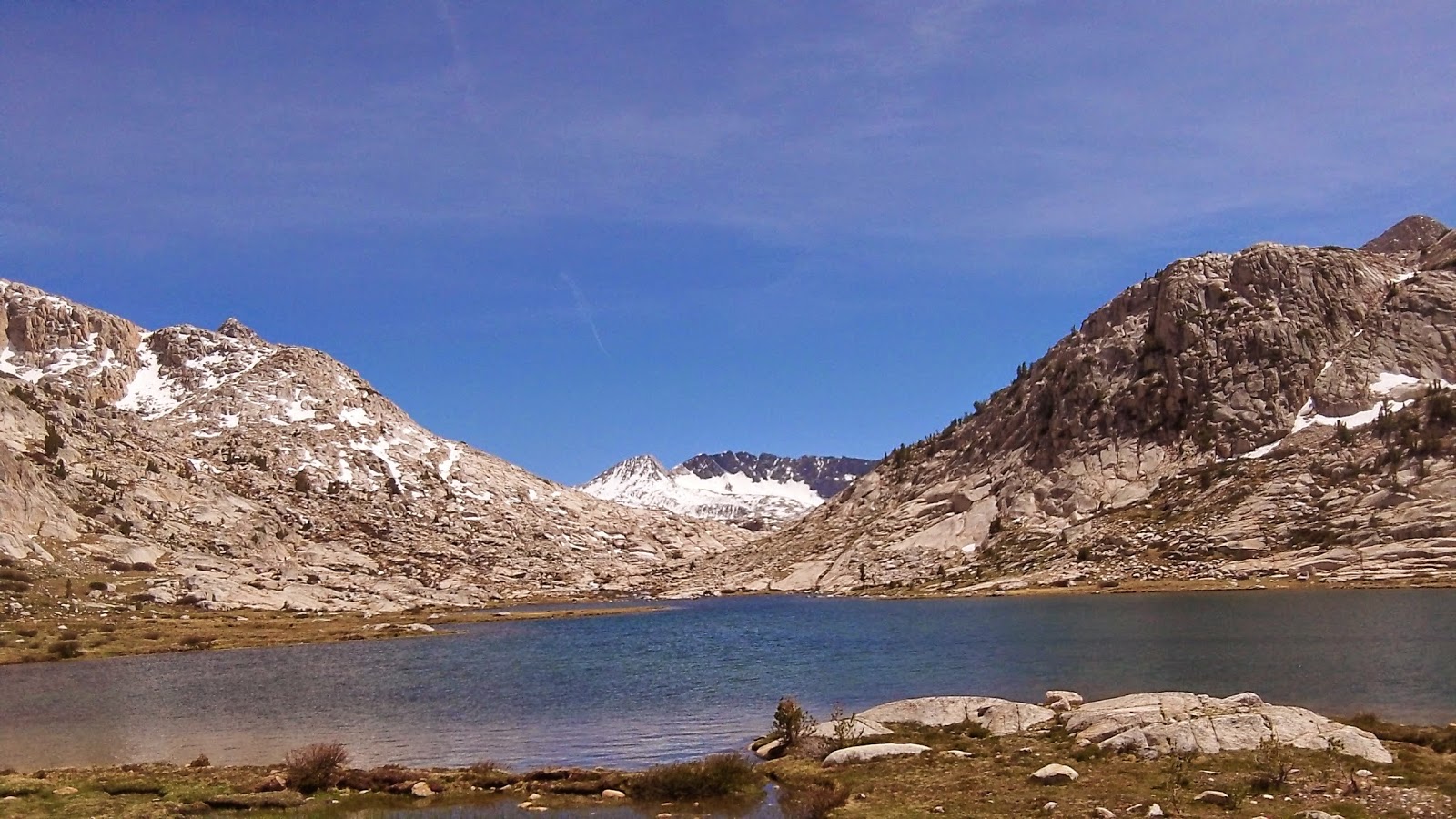 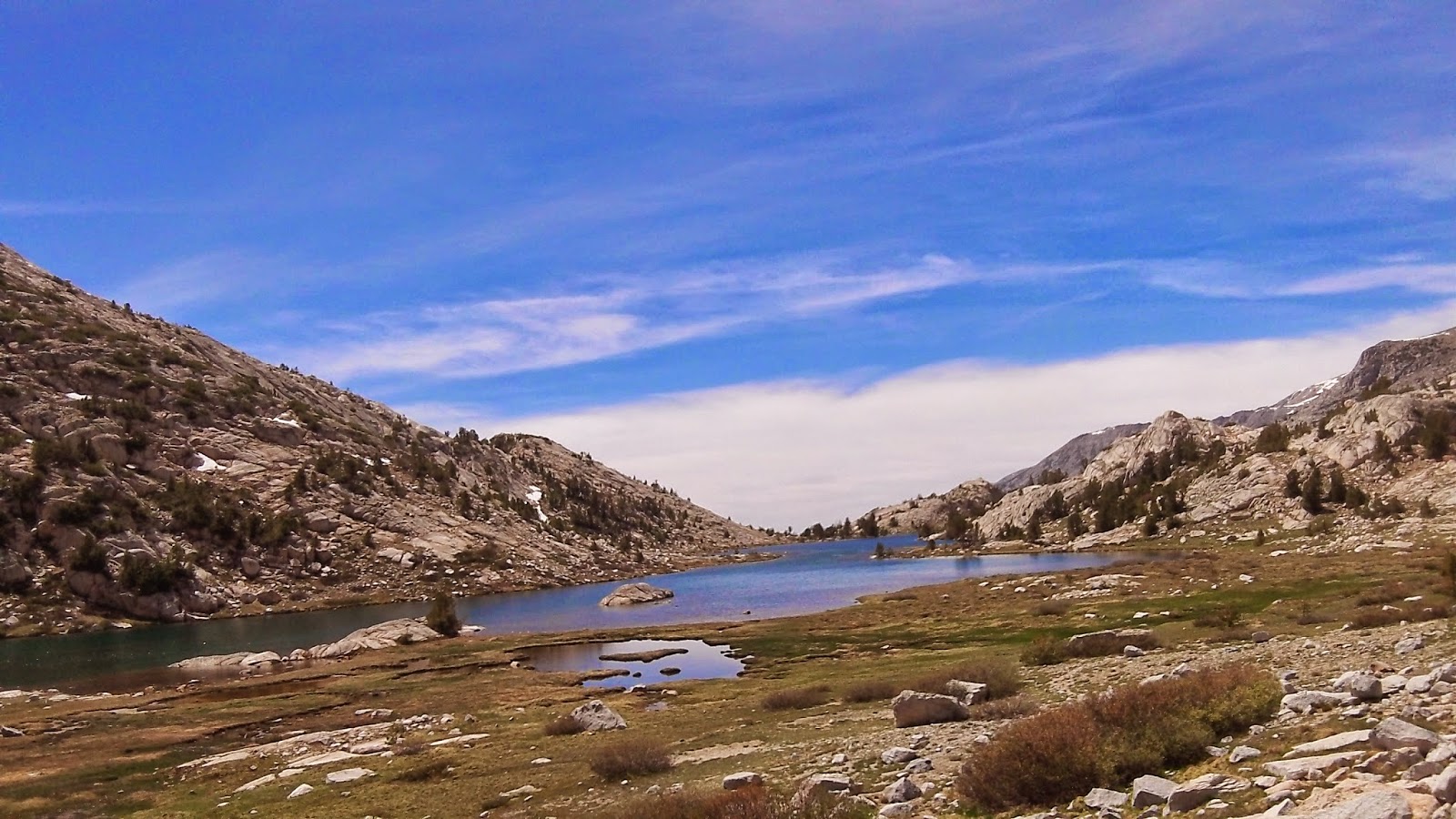 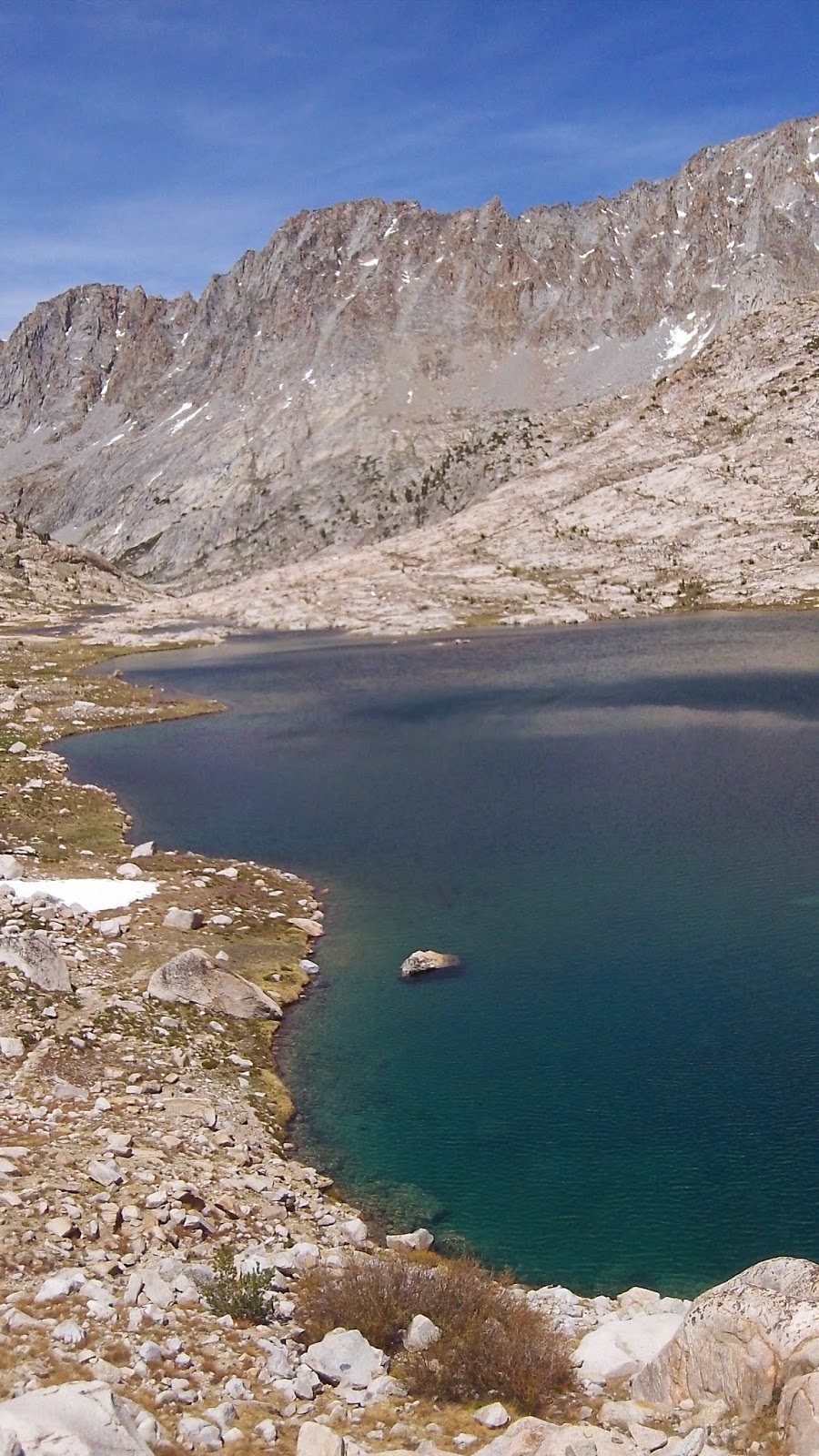 As I walked, I realized that I was getting a bad blister. I told Zach to go ahead and I’d catch up. He reluctantly did so. For the first time in 51 days, I found myself alone. I sat on a boulder and wrapped gauze around the swollen blister on my toe. Everything seemed so quiet. A marmot chirped at me. I looked all around at the quiet brooding mountains, and the quiet lake, and the quiet valley.

As soon as I got my shoes back on, I booked it as fast as I could down the trail. I wasn’t afraid or upset; I just missed him and wanted to be with him again. I hopped across a trail of stepping stones that led across a narrow part of a lake (again, thank God it wasn’t a high snow year!), and rejoined Zach on trail.

“I missed you,” I said. We both chuckled. It was a little ridiculous.

We followed the basin until it plunged into a narrower valley. I looked out at the mountains and forests all around, and tried to be more intentional about appreciating it. At least I didn’t feel raw fear anymore.

We hiked a bit with Ché, and ate dinner with him. We joined up at the crossing of Evolution Creek, which we figured we’d ford tonight (even though at night the streams run swifter and deeper because the snow’s been melting all day, while in the morning they’re calmer because the snow hasn’t had the sun on it yet). Evolution Creek was marked on our maps as a potentially dangerous crossing, but when we arrived on the bank we saw we had nothing to worry about: the creek was wide, but the water looked barely thigh-deep.

Ché was sitting on the shore, taking off his socks, along with a German man named Free Refills. He had gotten his name at the McDonald’s at Cajon Pass, when he was astonished to find that he could refill his soda as many times as he wanted!

In turn, each of us braved the icy water to cross the stream. My pants got a little wet, but I felt very much encouraged that if this was a “dangerous stream crossing” this year, we were going to be just fine. 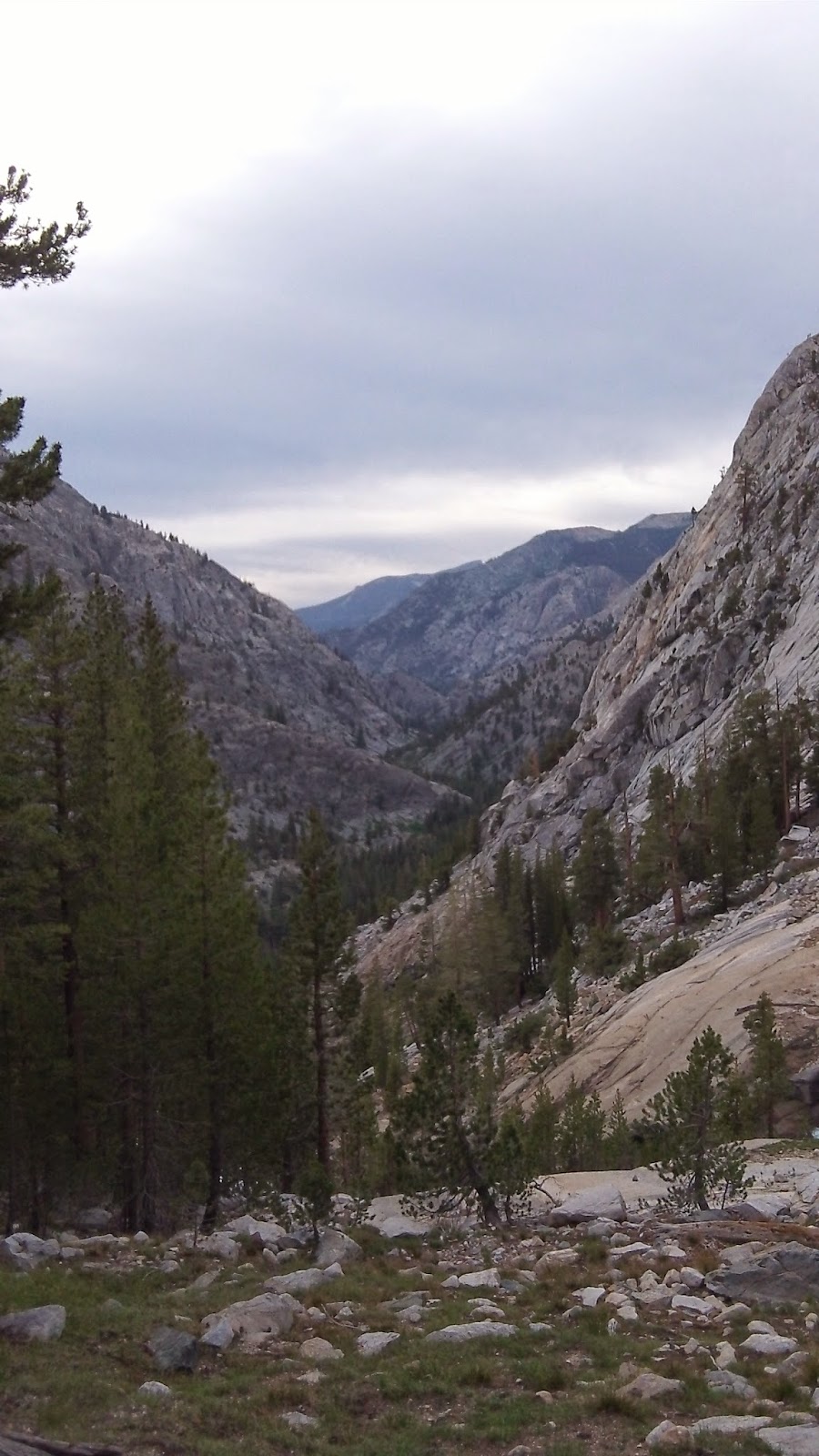 We continued walking down the mountain, as Evolution Creek got swifter and deeper beside us. Ché and Free Refills, walking at a breakneck pace, left us in the dust.

At the next crossing, there was a bridge and a campsite. We considered camping there, but decided to keep going, since there was still daylight. Besides, Ché and Refills had gone on! I was beginning to feel a bit of friendly competition that I hadn’t felt since the desert. 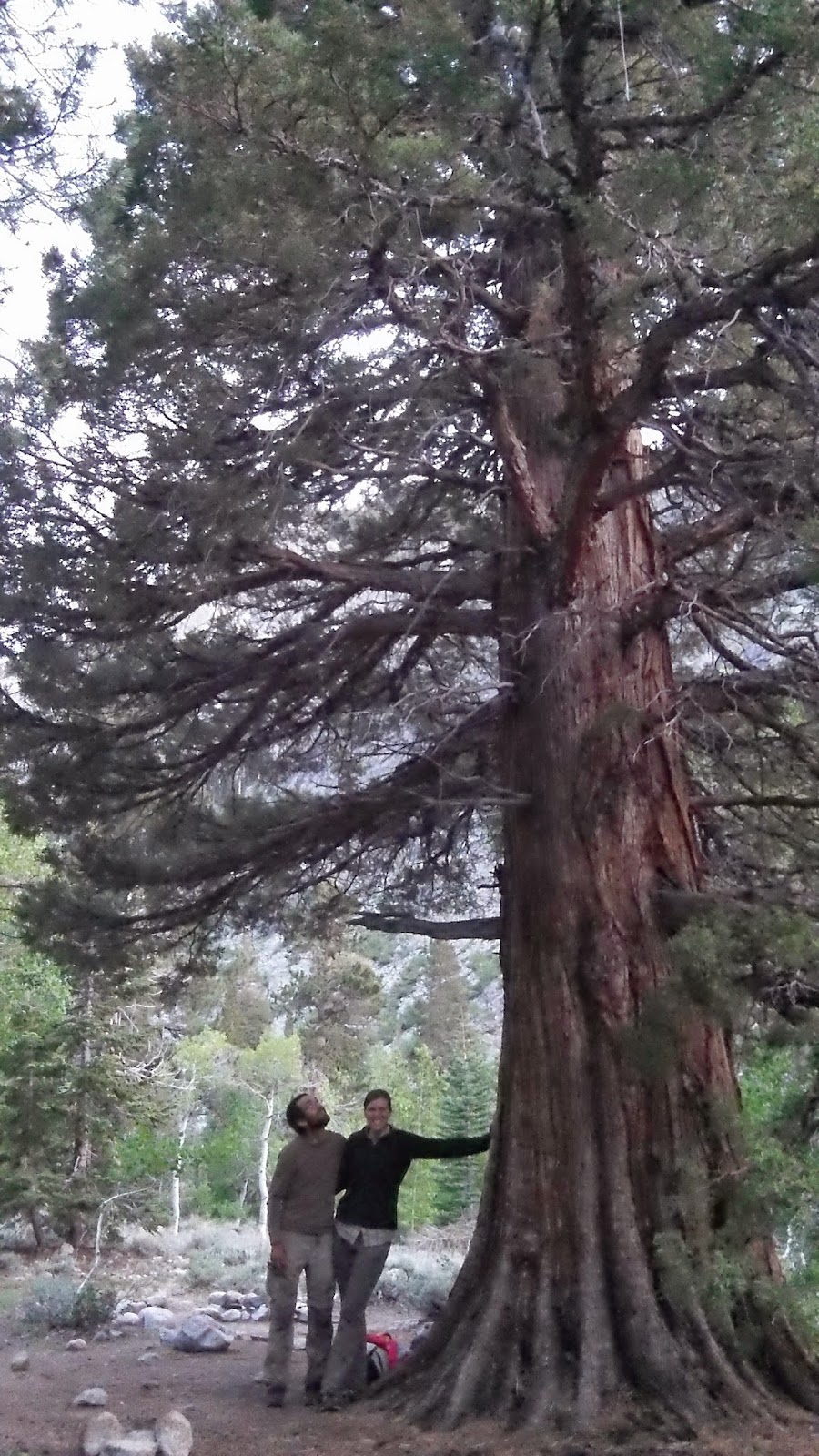 We crossed the bridge and walked on a slope near the banks of the river. We soon came across Ché and Refills, who were attempting to heave a log into the river to see what it would do. We helped them out, and then ran/hiked alongside the log, watching it get bashed against rocks and flow faster and faster as the river dragged it along.

At last, Zach and I crossed through a spring in a dense patch of woods, then found a lovely camping spot underneath a huge cypress. Ché and Refills said they were jealous of our spot, but refused our offer to make room for them and hiked on. We settled in, eating one carefully-rationed meal, no more. That night, even though I was still gnawingly hungry, I felt very satisfied that we had done a snowy pass and 21 miles.

The five snowy passes were crossed. What we thought was the hardest part of the Sierra was finally over.