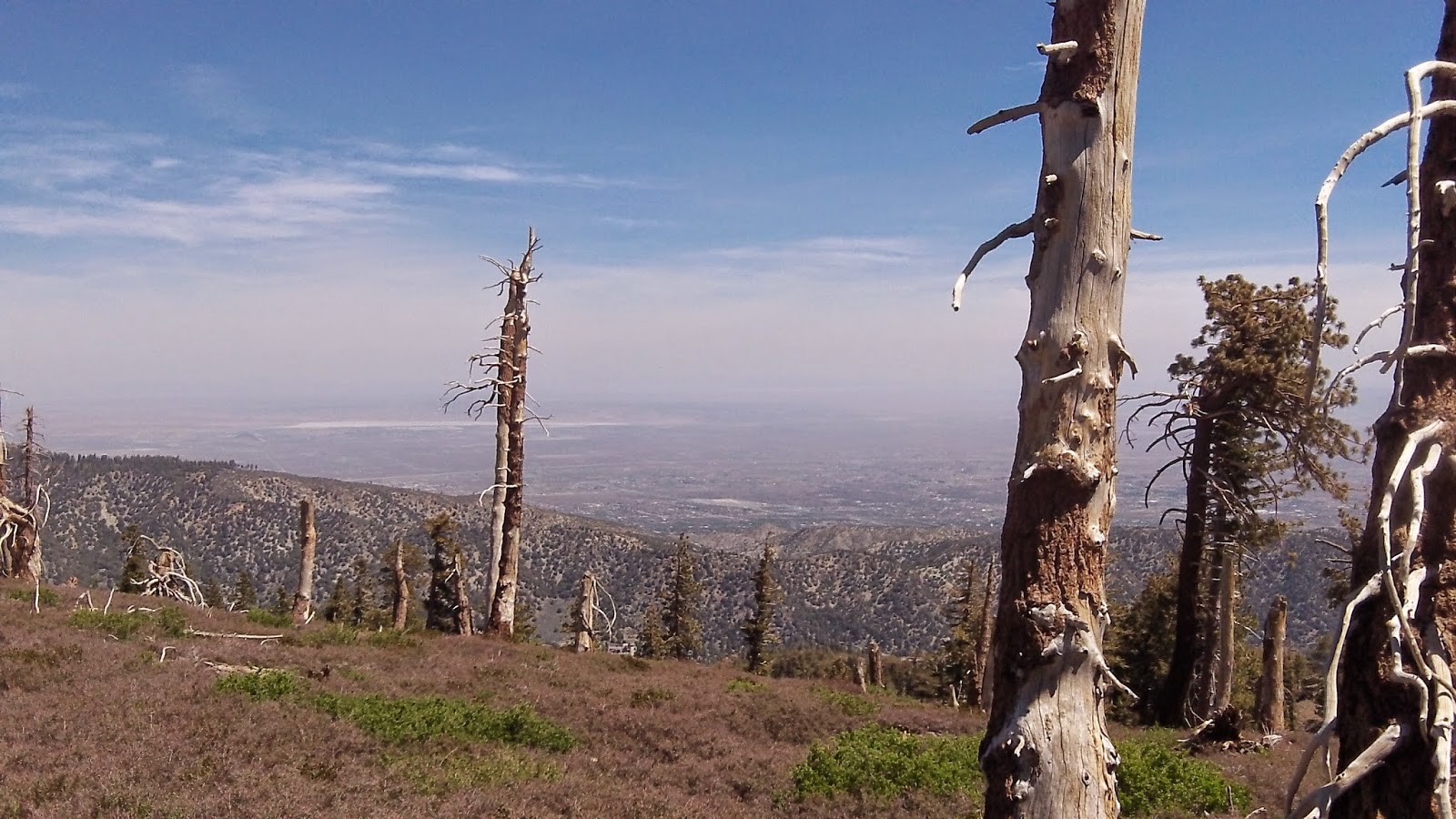 I floated to the surface of consciousness, feeling deliciously warm and snug and sleepy, to hear calm, zen-like music playing in the background. In my half-asleep state I thought it was a guitar, although later I learned it was a steel drum which a hiker was lugging along with him. Since we were at a backcountry camp, several dozen hikers were already camped there. However, we were exhausted, and so I drifted back to sleep, though the hypnotic music continued to lilt in my dreams.

We woke up for real a few hours later, when all but one of the hikers had packed up and continued on. We crawled out of the tent to find Guffy Campground to be a rather grungy and beat-up place, thanks to lots of careless day-users and overnighters who had no idea how to Leave No Trace. Bits of trash littered the ground. The fire pits were choked with half-burnt candy wrappers and cigarette butts, and bits of chips and Cheetos were strewn across the picnic tables, marked with black rings where people had left camp stoves for too long.

Besides the human elements, the setting was beautiful: we were high in the mountains again, with great views peeking out from the towering firs. I started packing up while Zach went looking for water. We literally had nothing we could eat without water. 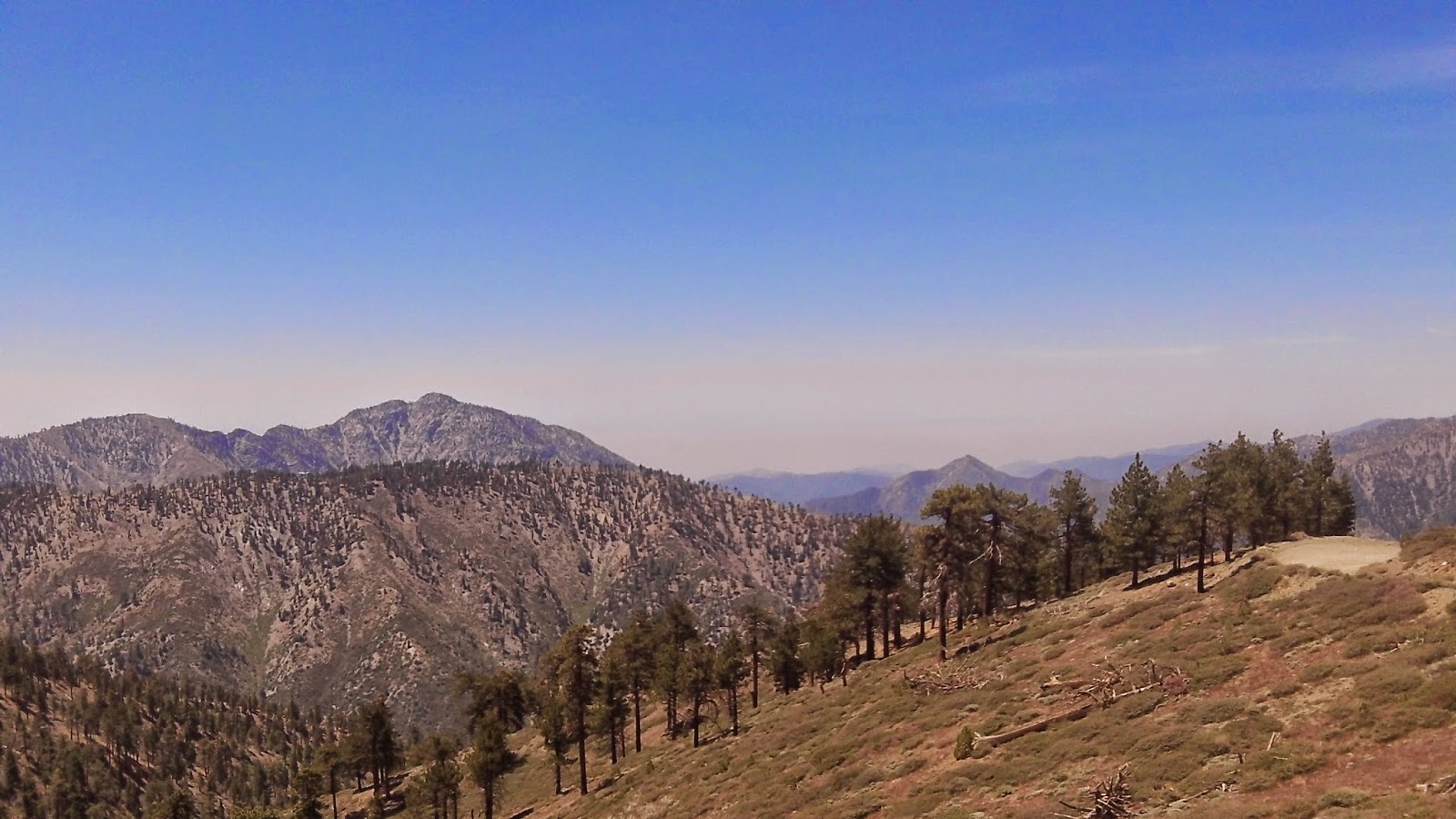 I chatted with an older hiker, named Hand Brake, then busied myself getting food ready. Zach returned much later, panting and soaked in sweat. He had found the water source: a tiny spring located in the side of the mountain down a very steep quarter-mile slope. We cooked pasta and ate a breakfast of kings.

It was noon before we set out, and we knew it wasn’t going to be a high-mileage day anyway because we had to stop in Wrightwood, five miles off-trail, to resupply. The trail wound around for a while before coming to a mountain road, paved but relatively deserted, near a rest area. Zach and I took off our packs and waited for a car to drive by.

It was about half an hour (but only three cars) later that someone stopped to pick us up. He said he was only going partway, but we figured that getting closer was better than nothing. He was a cyclist, and was going a couple miles down the road to see the grand conclusion of the Tour de California, a bicycle race.

It didn’t take us long to see what he was talking about— in a couple miles, the road was choked with tourists and out-of-state cars, along with blocked roads and informational booths. The guy dropped Zach and I off, and then we looked in vain for a place to hitch. We looked distinctly out of place with our backpacks and grungy clothes, and since almost nobody there was a local, they had no idea who we were.

We stood on the shoulder and awkwardly attempted to hitch for a little while, but the drivers gave us terrified glances as they sped by. At last, in despair, we decided we’d just walk the remaining two miles to town.

We walked for about half a mile, leaving most of the hustle and bustle of the race behind us. I stuck out my thumb for the cars that were passing, and at last a woman pulled over. She owned one of the hotels in town, and apologized that it had been so hard for us to find a ride.

She gave us a quick rundown of the amenities in Wrightwood as she drove us into the ski-lodge community, marked by quaint houses and local shops. Then she dropped us at the post office and wished us luck.

The moment we walked in the post office, the employee behind the desk said, “Welcome to Wrightwood, PCT hikers!” and smiled as if we were the greatest people to ever walk in the door. “Be sure to sign the register next door at the hardware store. We have a list of trail angels there, as well as information about the restaurants, hotels, and groceries. Hiker box is there, too. Do you have a box here?”

Soon we had our resupply box, and we dissected it in a corner of the post office parking lot. We strewed the food everywhere, sorting and categorizing it. As we were sitting on the asphalt doing this, a police officer drove up. We both stiffened a little, already forming our apologies for throwing our junk all over a public parking lot. But the officer, seeing us as he got out of our car, gave us a cheerful smile. “Welcome to Wrightwood! Have you guys signed the trail register yet?”

Taken aback, we stuttered, “No,” and continued sorting our food. It was definitely the friendliest trail town we’d been to yet!

Mountain Hardware featured a staff who was no less friendly. Zach bought some alcohol for our stove. I signed the trail register and looked at who was ahead of us. I flipped through an informational folder they’d compiled, which included a list of trail angels in town, a list of all the amenities, and a copy of the description of Wrightwood from Yogi’s PCT guide.

The list of trail angels was confusing— it wasn’t clear whether they were all offering places to stay, or just rides back to the trail. Some of them seemed to be asking for money. Zach and I decided to stick with our original idea of returning to the trail today. 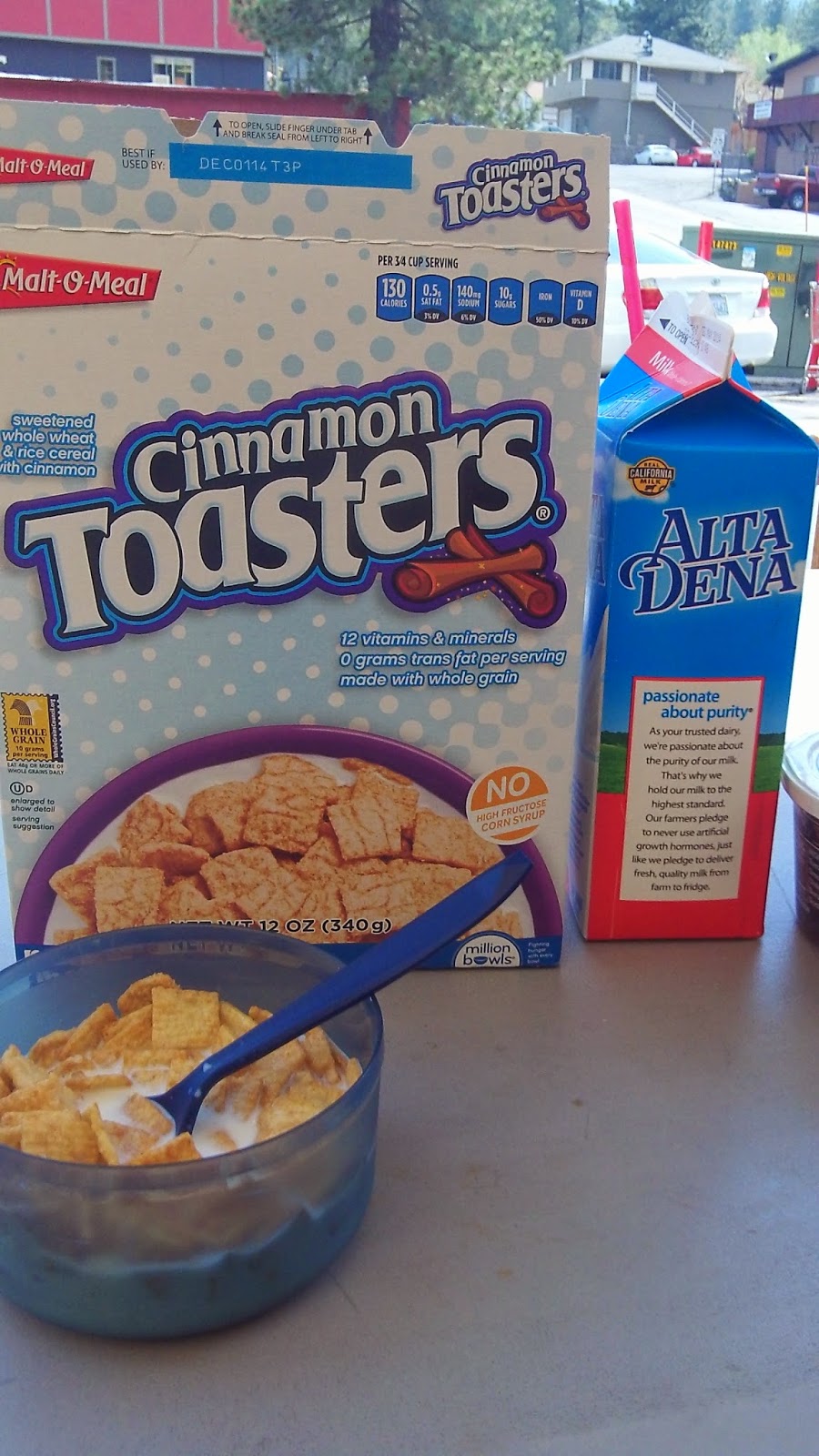 I dumped four extra meals into the hiker box— it was simply too much work to cook our food with our sputtering alcohol stove. A hiker with a young face and a mass of curly red hair stared at my leftovers. “You don’t want these?” he asked in disbelief.

“Sweet!” he said, scooping them up.

“Red Bandit,” he said, nodding his head in greeting.

We didn’t see him again until 1,675 miles later, and when we did, we didn’t remember him. But he remembered us.

In the meantime, we had plenty of time to relax. We headed over to Jensen’s Finest Foods and bought some supplies, including a bag of Fritos (quickly becoming our favorite snack— so much salt and fat!) and a tiny bottle of Tabasco habanero sauce (Zach had left behind his heavy bottle of ghost pepper sauce and dearly missed it). Our splurge item of the day was a box of generic cinnamon toast crunch and a quart of milk. We then proceeded to consume both in a single sitting, outside at a picnic table under an umbrella.

I talked on the phone for several hours, but there was just not enough time to catch up with everyone. When I was on my last call, a local guy walked up to Zach and said, “Do you need a ride back to the trail?”

Zach, once again taken aback by the straightforward friendliness, stuttered, “Oh, uh, yes! Let me just get my things together.”

“No rush,” the guy said. “My name is Paul. I just live a couple blocks away. Here’s my number, and whenever you and your lady are ready to go back up, just give me a call.” With a smile, he returned to his truck and drove away.

Once I got off the phone, I burst into laughter. “What is wrong with these people?” I asked. “They’re so friendly!”

We lounged around for a while longer, then called Paul, who promptly picked us up and drove us back to the trailhead. He helped with search and rescue in the area. We asked him about Wrightwood’s friendliness, and he smiled. “We try,” he said. “We love PCT hikers, and they’re good for our economy. So we try to make them feel as welcome as possible.”

From Highway 2, the trail was pretty flat, although it cut through steep alpine scenery cloaked in firs. We saw warning signs for bears in the area, something I didn’t expect in the “desert” section. In the distance, we saw LA’s smog.

We paused at the Grassy Hollow Visitor’s Center, which was closed but had a pump with potable water for the hikers. We pumped it into our bottles and took a drink— and the sharp taste of iron nearly knocked us over. Filtering it did nothing to remove the taste, and all the rest of the evening, I kept on thinking I had blood in my mouth because of the aftertaste. Oddly enough, this was hands-down the worst water we got on trail. We filled up, since we had no choice, and continued on.

Once again, we found ourselves racing against the sun. The solstice couldn’t come fast enough! In the gathering gloom, Zach checked out different semi-flat spots along the trail, but we couldn’t find anything flat enough.

At last, when the sky was lavender with twilight, the scenery flattened out and we found a nice stretch of pine needles under trees, with several hikers camped to the right of the trail. We took a slightly slanted spot to the left, set up camp, and ate some garlic bread we had bought in town. It was covered with a thick coat of margarine and we couldn’t finish it, so we packed our garbage with our food and left it several feet from our tent, now that we were paranoid about bears. Then we crawled into our tent, and Zach opened the Kindle to read Lord of the Rings to me. King Théoden died. I wept.