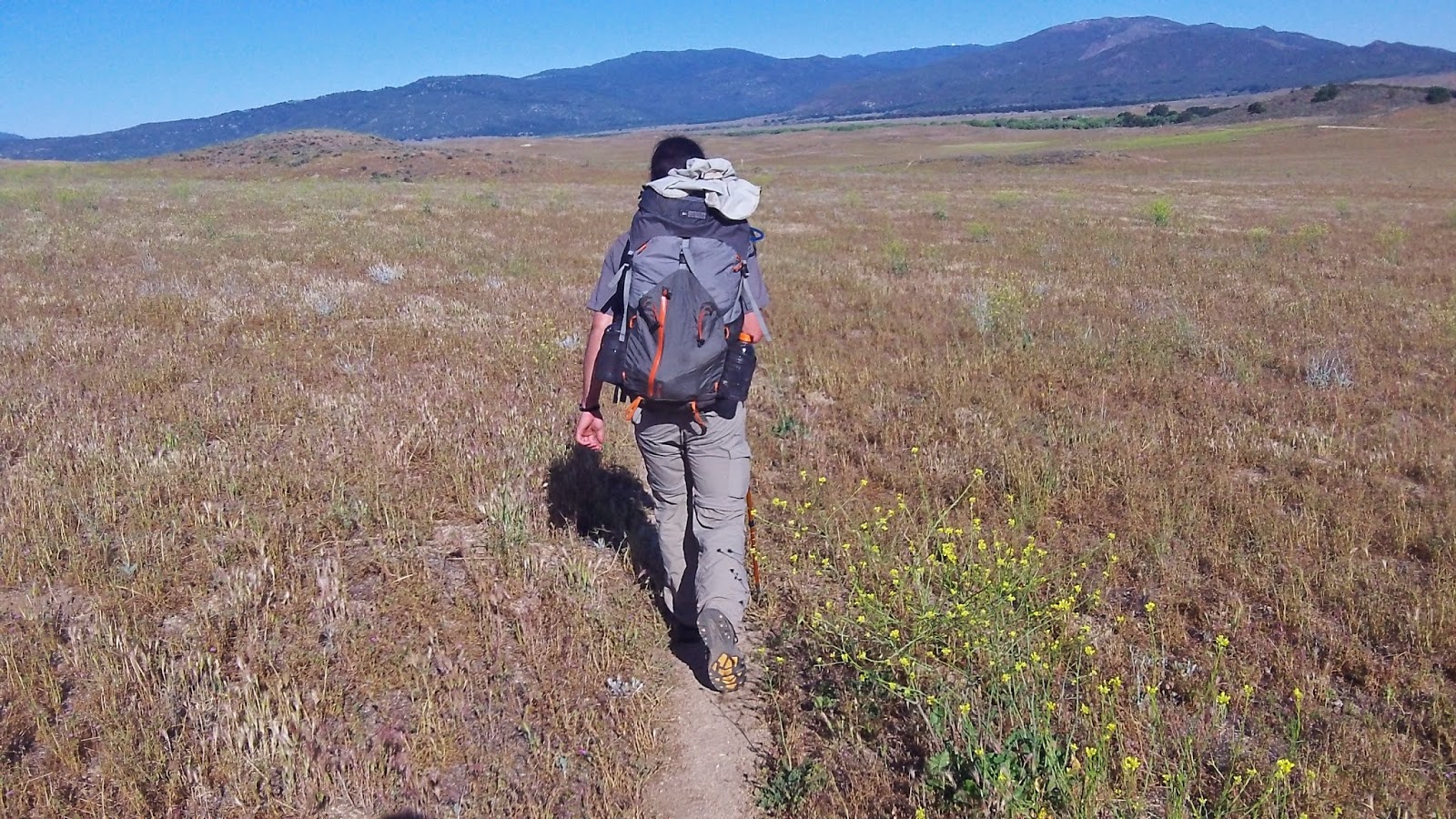 The next morning, I enjoyed the pleasant experience of waking up in a bed, with cotton sheets and a roof over my head. It was 6:00am, but Monty was already up and fixing us breakfast— which, from the enticing smells drifting from his roped-off kitchen, was going to be another gourmet feast. He served us as he had the night before, giving Bam Bam scrambled tofu with veggies and the rest of us scrambled eggs with huge chunks of potatoes and other vegetables, more flavorful than vegetables have any right to be. I made it a personal goal of mine to learn how to cook vegetables like that!

Monty took one group of people back to the community center, and let Anthony drive another group in his spare car. We all crammed into the car, some of us with our backpacks on our knees, and drove back, looking off to the left at the wide fields that we had hiked across two days ago. We popped out like sardines at the center, and Monty wished us all good luck and drove off.

Without hesitation, we set off. The trail ran along the edge of town, across fields and then through scrubby, open woodland. As we walked, I saw movement on the trail ahead and looked up just in time to see a large catlike form leap across the trail. For a second I just registered it as a house cat— until my brain realized that it had been the size of a golden retriever, and had no tail. We walked quietly to where it had crossed and peered into the bushes. Sure enough, a lean, tufted-eared face looked at us through the brush: a lynx! I was so excited that I didn’t feel any fear at all. It stared at us with wild yellow eyes, then disappeared into the woods.

Before long, we came to the place where we had planned to fill up on water: the not-very-promisingly-named Agua Caliente. We found the stream bed bone dry. We had only a liter of water, but decided to try for another five miles (in retrospect, this was a terrible idea). Half a mile upstream, though, Agua Caliente was flowing beautifully, and we found the water to be clear and cold. 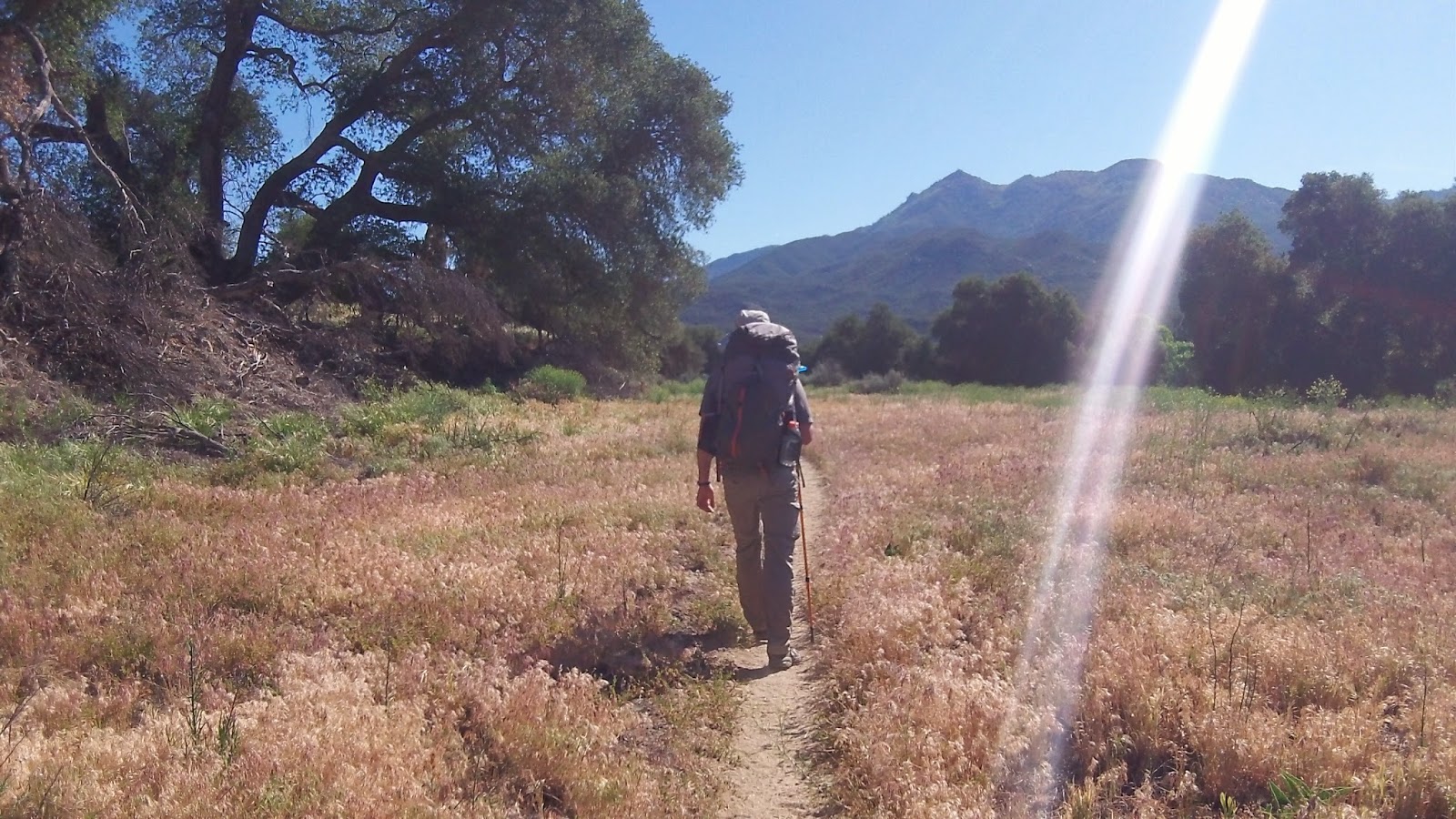 As we were filling up, a young guy with large blue eyes and a thoughtful face walked up. We introduced ourselves, and he said, “My name’s Banjo.”

“Hey, we met your friends!” we said, then felt guilty because he had been left behind and missed Monty’s hospitality. Still, he seemed to take it in stride.

We soon hiked up out of the woodland, and found ourself in familiar territory: “writhen hills” covered alternately in rock, scrub, and boulders. The sun grew very hot overhead and our water supply dwindled. We ended up dropping our packs at a junction and hiking several hundred yards down a side trail to a water source. The water source was a stagnant trough with tadpoles swimming in it. We were disgusted but couldn’t be choosy, so we strained the water through a bandana first before passing it through the filter. Despite its appearance, it was fairly cool, and tasted better than most tap water. We filled up and trudged back up to the trail.

It wasn’t long before we began to feel faint in the boiling sun. We searched for shade but found none. Eventually we huddled in the lee of a boulder, which provided a narrow strip of shade, if not coolness. We tried to sit on the rough, slanted ground and keep the ants from crawling up our legs. Zach cooked something, which was horribly hard with the wind and our flimsy alcohol stove. Food didn’t taste good. We were too hot. 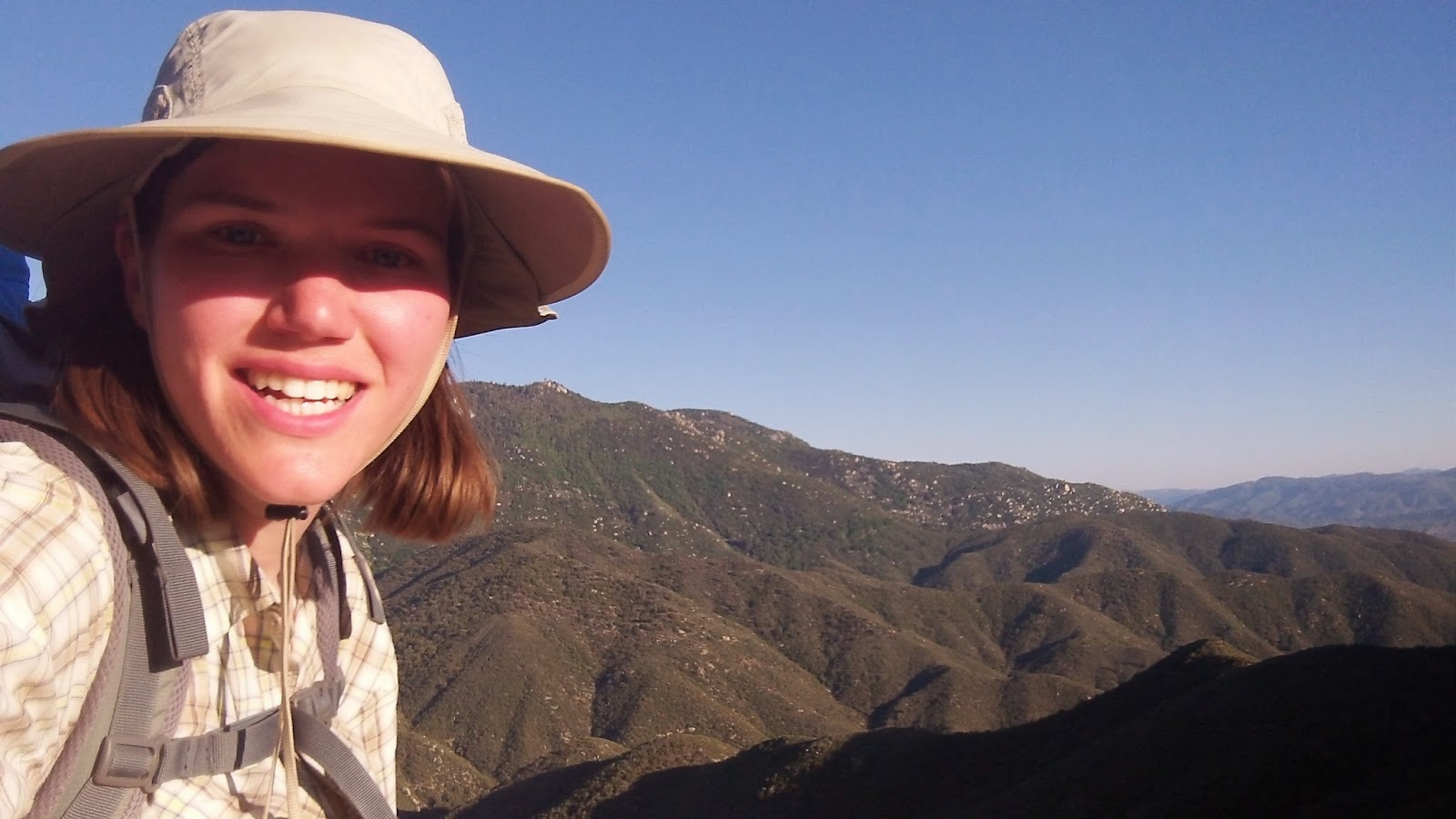 When the sun had fallen a little and was casting shadows, we started off again, trying to hike at a steady pace. It was the first time in a while that I was feeling not sick or congested, so I was beginning to feel happier about my hiking condition. We ran into our friends George and Karen near the top of a hill, where they were setting up camp in the shade of some manzanita bushes. We talked about water— all hiker conversations were about water at that point. They said they thought they had enough to get to the next water source, which was a few miles away. “We heard rumors that there’s a party going on there, with a trail angel,” they said. We still had a bit of daylight left, so we determined to see if we could get there.

Darkness was closing in fast as we approached our destination, weaving our way through fields of huge peach-colored boulders and into another endless trail of manzanita on hills. But there was nowhere to camp anyway, so we pressed on in desperation.

We paused at a water cache, although we didn’t take any since we were full up. I skimmed through the trail register there, which had thank-you note after thank-you note to the people who had left the water.

One person’s comment stuck out to me: “I’ve heard it said that we don’t hike the trail… we are carried by trail angels. Thank you so much.” 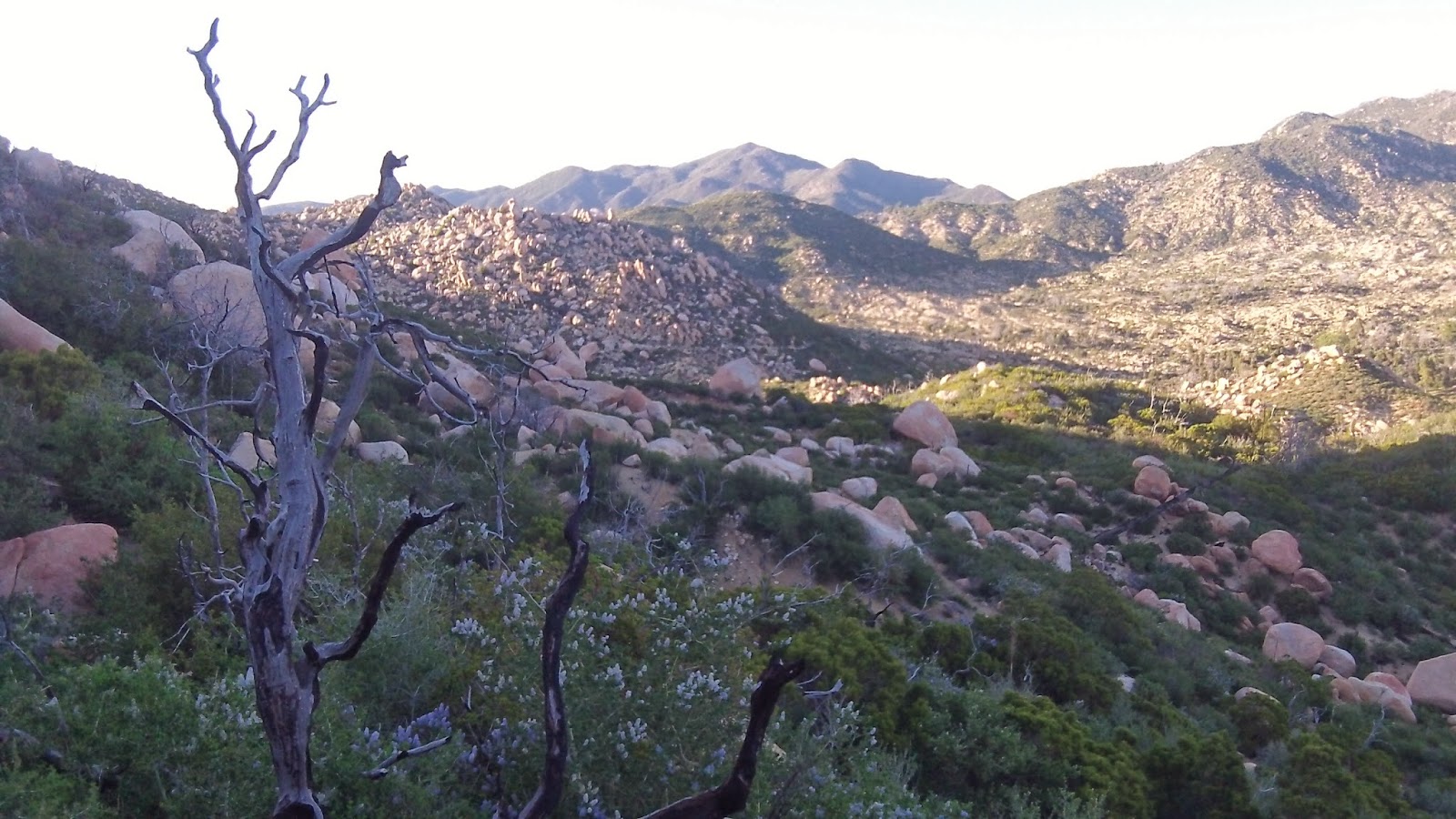 The sun set, and we were walking in twilight when we came upon a sign, lit with a solar light: “Trail Angel Mike’s. Path 500 feet. Follow signs.”

With new energy, we followed the signs, crossing a dirt road, passing a couple huge water holding tanks, and walking down some mosaic-encrusted stairs toward a house and grounds with a friendly sign saying, “Welcome to Sky Ranch.”

So had I, and I vaguely remembered seeing pictures of it. We hurried onward. Dark closed in.

On the porch of the house we found a few hikers, including Pinch and Goosebumps, who cheered as we came striding in. We were also welcomed by a chunky young man with pale blue eyes and a hipster mustache that he had twirled and waxed into thin wires on either side of his face. Another guy, older and more businesslike, quickly went over the ground rules: we could camp on the lawn or use the bunks in the hiker hut; we could pee in the bushes and do other business out further in the manzanita bushes; there was a water tank on the side of the house or a hose if we needed more water; there was a donation jar on the table; there were about fifty individual shots of tequila in plastic cups on the table, up for grabs; there was food at the grill over there; throw your plates in the trash can when you’re done.

Dazed and giggling a little, as we often did when we found ourselves unexpectedly in an amazing place, we wandered over to the grill and piled our styrofoam plates with homemade tortillas, roasted potatoes, and the best hot-sauce-marinated grilled chicken I have ever eaten. We ate, slowly and thoughtfully, savoring the sharp flavors that were so welcome after an afternoon of food seeming tasteless. Zach took a shot of tequila and I drank some water. I couldn’t stop giggling. We just didn’t deserve this treatment!

Hikers all had mixed opinions about Sky Ranch, and not everyone received the warm welcome we did. But everyone there was friendly enough to us, and the chicken was delicious beyond all reason, so I’ll always remember the place with fondness.

The guy with the wired mustache introduced himself. I’ll call him “Waxy.” I didn’t immediately sense the creepy vibe from him, mostly because I had a man with me and therefore was not an eligible young woman. I gathered that he had hiked the trail in previous years, and now he was going to different spots along the trail to spread joy and share in the community. Later I learned it was also to smoke/sell copious amounts of weed and get drunk and/or laid as much as possible. But with us, he mostly just talked about hiking the trail, and how cool it was, slipping in references about how he always had done 26-mile days through the desert, and 18-mile days were just so easy. Once again I began to feel insecure. Later, when I learned more about him, I actually laughed out loud that I had ever allowed him to intimidate me.

At any rate, we were well fed and were in a place with good clean water, so I was happy. We set up our tent at the edge of the yard under a tapestry of stars, and fell asleep with our bellies full and our hearts hopeful.