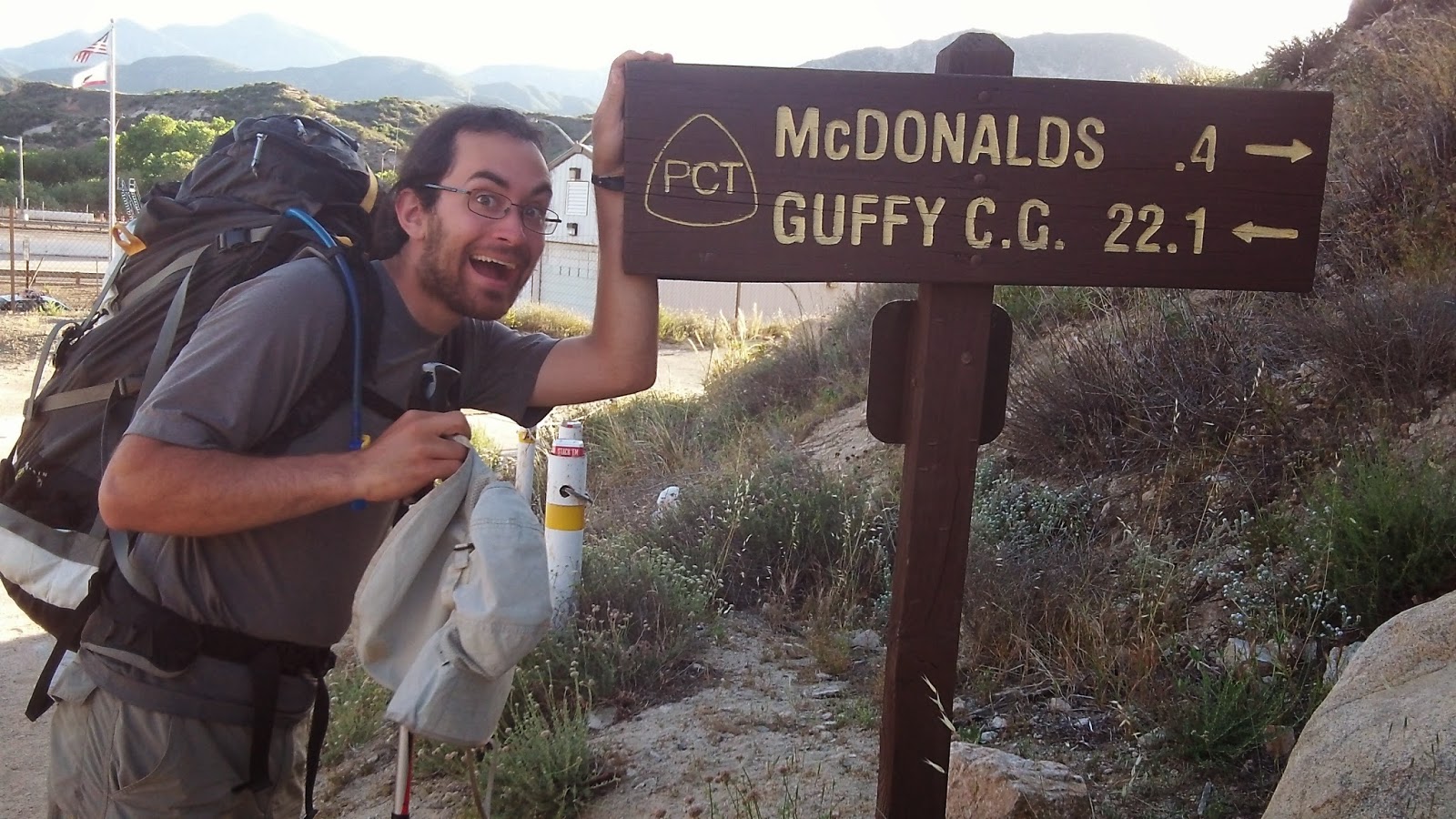 We woke up late the next morning, and Grandpa Ed made us breakfast: two eggs, two strips of bacon, and two pieces of toast for each of us. We devoured them almost instantaneously, then raided the fridge to consume the leftover pizza from our restaurant visit the night before.

We spent the morning chatting with him, and he told us stories of his Walden-like adventures in Canada. He moved there when he was a young man to homestead. After obtaining a miner’s permit to search for gold, he staked a claim near a river ten miles from the nearest tiny town, and proceeded to build a cabin, hunt and forage for food, and live off the land through a cold Canadian winter. He built a buckstove and burned green cottonwood in it, since he didn’t have enough time to season the firewood. Eventually the pitch built up in the chimney pipe and caught his roof on fire. He was barely able to save the cabin.

His talk lighted Zach’s and my minds with thoughts of homesteading and living off the land. Granted, his description of how to gut a squirrel was a bit off-putting, but there was something delightfully romantic about it all.

After that, we looked through some photos, some of ours and some of his when he and Sande were visiting King’s Canyon, where Zach and I would be headed in a few weeks. The picturesque photos of the mountains seemed so far away from the desert we’d been hiking through.

Around noon, he drove us back down the tortuous roads, dropping us at the shoulder where he’d picked us up. We snapped a photo with him, waved goodbye, and continued on the trail right where we’d left off. 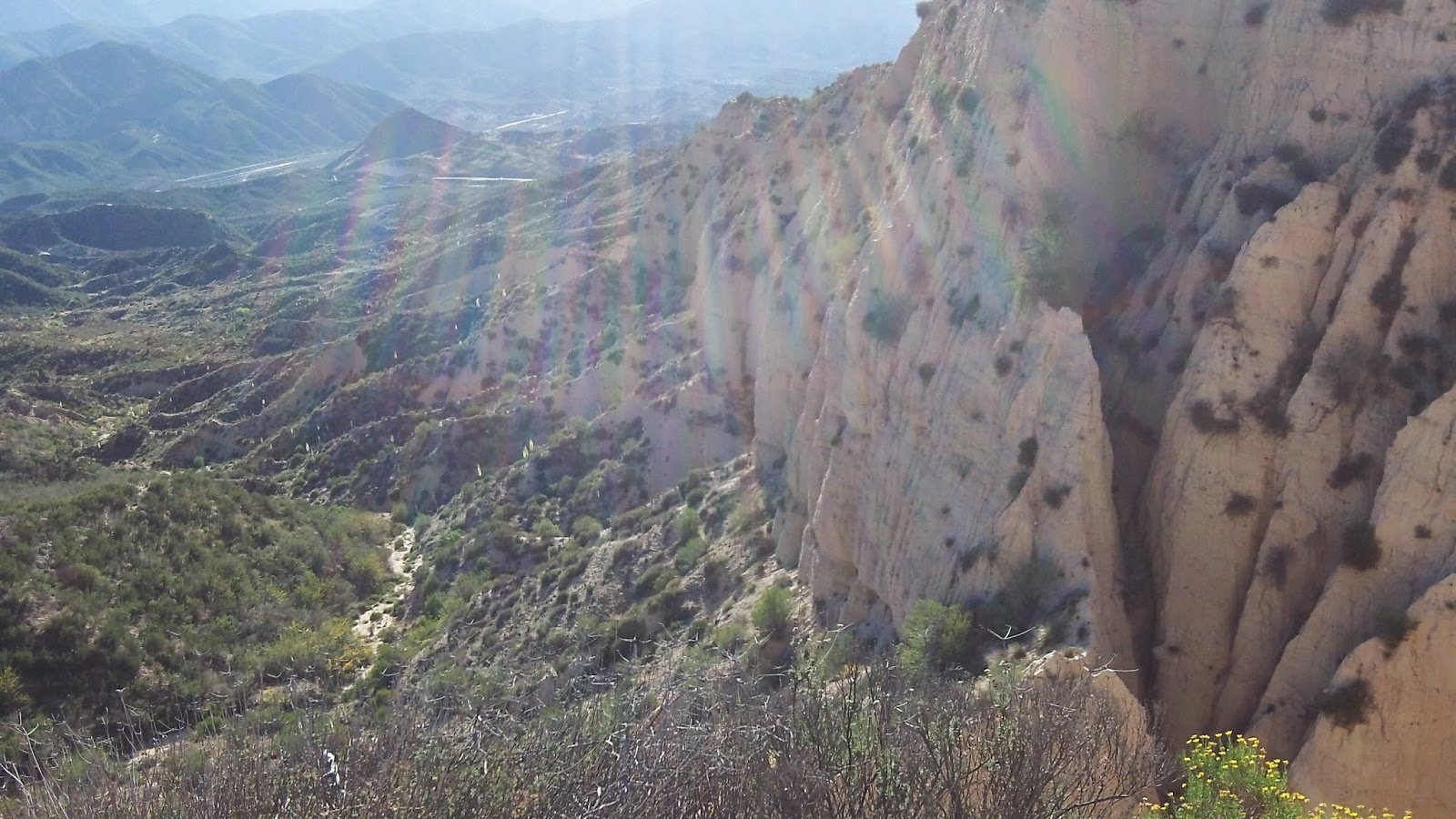 The landscape that day seemed downright boring to me for the most part, although later, when I saw the one photo I snapped of that whole section, I wondered why I didn’t take more pictures of this beautiful landscape! It was a tapestry of small but rugged green mountains, and we followed the spine of a ridge and looked off to the left to see a cliff that disintegrated into giant pillars and rifts of sandstone.

We could see the interstate, Highway 15, in the distance, sometimes to the left, sometimes in front of us. The semi trucks looked like toys zipping along a tiny thread of road, their noise not reaching us up on the breeze-blown hills.

My diary records that I had a huge meltdown, and a conversation ensued. However, I have no memory of it. Meltdowns became so commonplace later on in the trail that I can’t remember which was which.

It was still mid-afternoon when we paused by a sign with arrows that read: McDONALDS .4

I was surprised— I knew about this McDonald’s, having seen photos of hikers with twenty Happy Meals, but for some reason, I had imagined the McDonald’s somewhere in the forest, not the desert. Zach and I had a little debate, and I worried about spending too much money that wasn’t in our budget. Fortunately, Zach put his foot down. “We have to enjoy ourselves sometimes,” he said. “We can’t skip one of the most iconic places on the trail over a few bucks.”

I knew he was right in my head, but I still felt upset and stressed about money (this would become a more and more common theme as the trail went on). Still, we took the little detour toward the McD’s in search of cheap junk food.

We saw a lot of hikers leaving as we were coming up, including Thistle and Ouzel, who we stopped and chatted with. Then we stepped into the air-conditioned bliss of a fast-food restaurant, set our backpacks in a booth, waved hello to the half-dozen other hikers there, then went to drool over the dollar menu.

We each bought three dollar-menu burgers, thinking that was a reasonable start. (We had heard horror stories of hikers eating ten burgers and packing out ten more, then making themselves sick and barely being able to hobble along.) After we devoured the burgers, I returned to the desk to buy a McFlurry. As I stood behind a normal (non-hiker) customer, I overheard the following exchange.

The customer sniffed the air, then wrinkled his nose and asked, “What’s that awful smell?”

The clerk, speaking in the lowest voice he could manage, murmured, “Hikers.”

“WHAT?” the customer all but yelled.

“Hikers,” the clerk said a bit louder, glancing at me uncomfortably.

“Hikers!” I exclaimed from behind him, raising my arms in a jubilant display of carelessness and horrendous body odor (yes, I’d showered the night before— but a day of sweating nixed its helpful effects).

The customer, looking more confused than ever, backed off.

Zach went to the gas station next door and bought some headphones so he and I could take turns listening to music. It was an important purchase, one that did a lot to curb the boredom that was overtaking us at a rapid pace.

We stalled at the McDonald’s for a few hours. I called home. I cried a little bit. I felt stressed about where we would camp for the night, since we were at a highway crossing tucked between steep hills. At last, in the darkness after sunset, when only a faint purple glow showed that the sun had been up, we returned to the trail.

We were very happy to have two headlamps now, but they didn’t make much of a dent in the overwhelming darkness. Despite the massive highway rushing by, there was very little light.

We passed through a tunnel underneath the highway. The small scope of light that my headlamp cast, coupled with the roar of the trucks and cars overhead, made me dizzy and a bit frightened. We heard a train roar by. I was battered by irrational fears that we would be attacked by an axe-murderer. (Oddly enough, this was the only time on trail that this particular fear came into my mind.)

We emerged from under the highway and squinted at the sandy trail that wound between prickly bushes and cacti. The trail blazes, mounted on flat fiberglass posts, glowed in our headlamps. We picked our way through a grove of trees and back into the desert landscape. Dimly ahead, we could see hills rising up. Camping might be sparse soon.

Despite being only a hundred yards from the highway, Zach and I decided that we should just camp here. We found a flat spot that didn’t have too many rocks or thorns, and carefully set up camp, trying not to jab our inflatable pads into any of the prickly plants around.

We huddled in our tent, exhausted, but determined to wake up early and get in more miles the next day.

As I was going to sleep, I heard a noise like a jet-plane, rushing closer and closer. The sound roared over us like thunder, all around us, as if a ghostly freight train had rushed through our tent. My ears were ringing afterward. But Zach and I were so tired that we just went to sleep anyway.

Our ghostly jet-plane-thunder-freight-train noise visited us frequently that night. But it, like other white noise, barely brought me to the surface of consciousness, and I soon went back to sleep.

In the middle of the night, though, Zach urgently shook me out of a dead sleep. He was half-sitting up on his pad, staring at me with wild eyes.

“The snakes,” he said in a breathless, not-quite-slurred voice. “They’re going over the tent.” He made a sweeping motion from one side of the tent to the other with his finger. “The snakes… over the tent…”

I had seen him in this state before, where his body was awake but his mind was still dreaming. “There aren’t any snakes,” I said as soothingly as I could. “You’re dreaming. Go back to sleep.”

Zach stared intently at the ceiling of our tent, his eyes flicking back and forth at the invisible snakes. Then he sunk back onto his pad and started snoring.