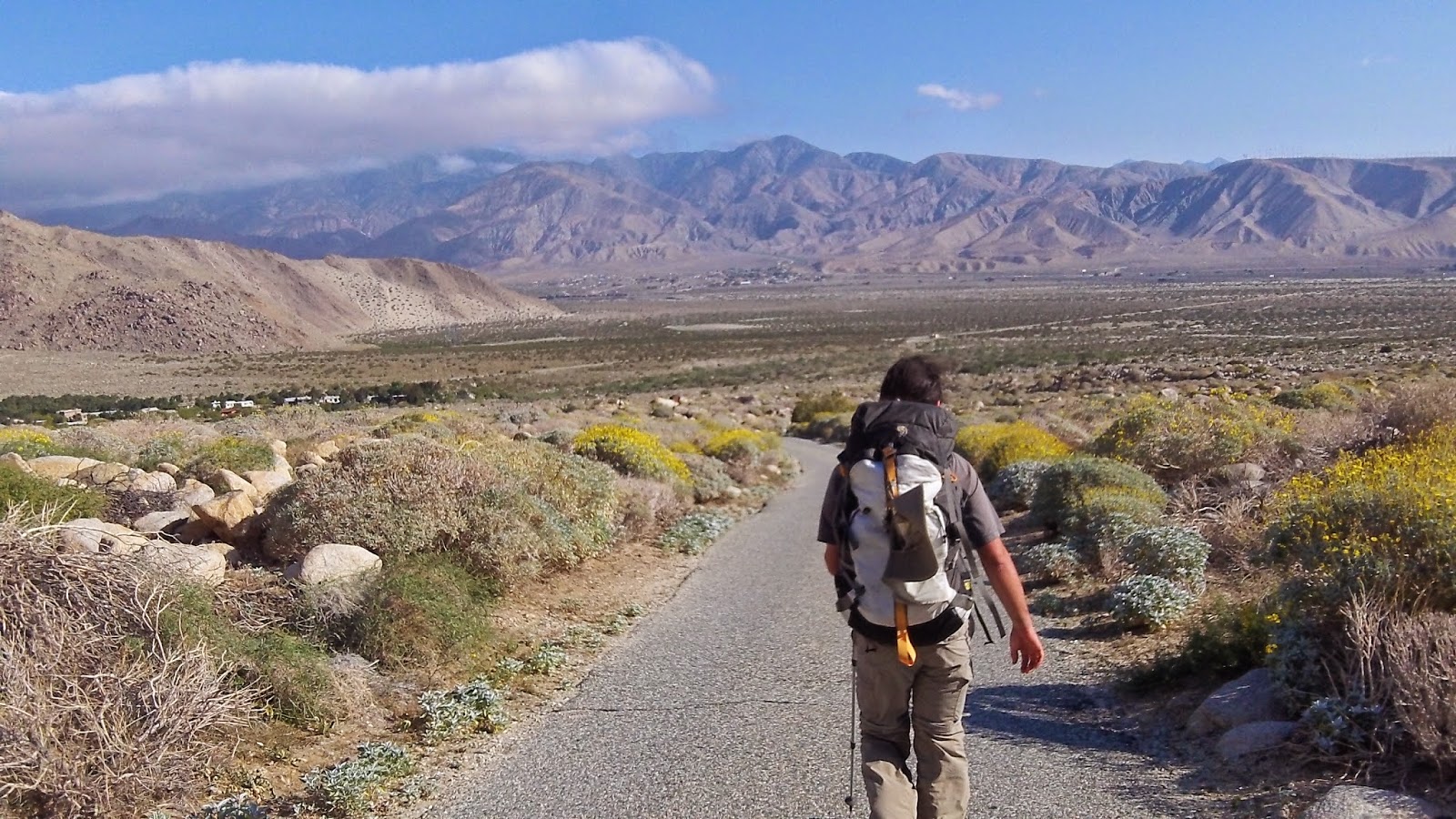 We woke up to find that, while the wind was still raging, the rain clouds had been swept away. A few puffy cumulus clouds hung over the distant mountains to the northwest— mountains we knew we’d have to climb, after we traversed the plain full of windmills and civilization, with a resupply at Cabazon, a town five miles off the trail. In the meantime, there was a bit more downhill, and then a trek across the plains, and then we’d be climbing into the mountains again.

Magically, my shin splints had gone away. My legs felt good as new, which was very strange. Zach and I decided not to question it.

It was less than a mile until the switchbacks ended and the trail met up with a paved road. There was a water faucet attached to a tank there, and we drank our fill of lukewarm water and topped off our bottles. At the faucet was a sign that said, “We’re here— stop in and see us! -Ziggy and the Bear.” We had heard about them— Monty had said they inspired him to start trail angeling. We decided we’d say hello.

First, there was a four-mile hike across the plain to the highway where we intended to hitch into Cabazon. The wind picked up as we headed down. We passed a nice little suburban neighborhood with planted trees that appeared to be battling for their lives against the surrounding desert, then headed toward a field of windmills.

As I mentioned before, at this point we weren’t yet traumatized by the sight of windmills. I’d always found them a little unsettling, but also beautiful in their own way: the wing-shaped turbines tossing over themselves, flying through the air in never-ending circles. But today was the first day that we realized what windmills really are: signals of the presence of murderously strong wind.


It almost turned on like a switch: one second we were on a paved road with a brisk wind flapping our hat strings and hair— the next second we had stepped onto a sandy trail, and the wind slammed against me so strongly that I almost fell over. I felt like I had stepped into a river with a current of dry air that would drag me under and drown me. Zach and I both staggered under the force of the gusts, and began attempting to walk.

The trail was comprised of fine, soft sand that swallowed every step, making it impossible to gain any momentum. Each step was a dead stop, and when I attempted to push off for my next step, my planted foot sunk further. When one foot was in the air, the wind gusted so hard that I stumbled, feeling my backpack amplifying the effect. Desperately I stabbed my trekking pole into the sand, and it too was swallowed up and didn’t help much.

Over the course of the trail, we had to traverse all sorts of landscapes, from snowy passes and smoke-choked forests to 7,000-foot ascents. But I swear, that four miles across the plain were some of the longest miles on the entire trail. These four miles, each step swallowed in soft sand while wind slashed us and turned our hat strings into deadly weapons that left welts on our cheeks and necks, were awful in every way. It took forever. It was torture. I felt caught in a nightmare, but aware enough to experience the tedium of staring at our destination— a highway underpass, within easy sight— as each difficult step seemed to take us no closer, for two hours.

By the time we had stumbled under the highway underpass, a slight break from the wind, I felt like murdering someone. For no particular reason. Neither Zach nor I spoke. We walked with dead steps on the concrete, feeling the novel experience of our feet not sinking in the sand.

Something else was becoming clear, too: there was no way we were hitchhiking from here. This was a huge highway, and our only hope was to stand on the on-ramp and hope someone picked us up. That was not much of a hope.

Then, in the midst of our misery and murderous thoughts, we stumbled upon the first trail magic. 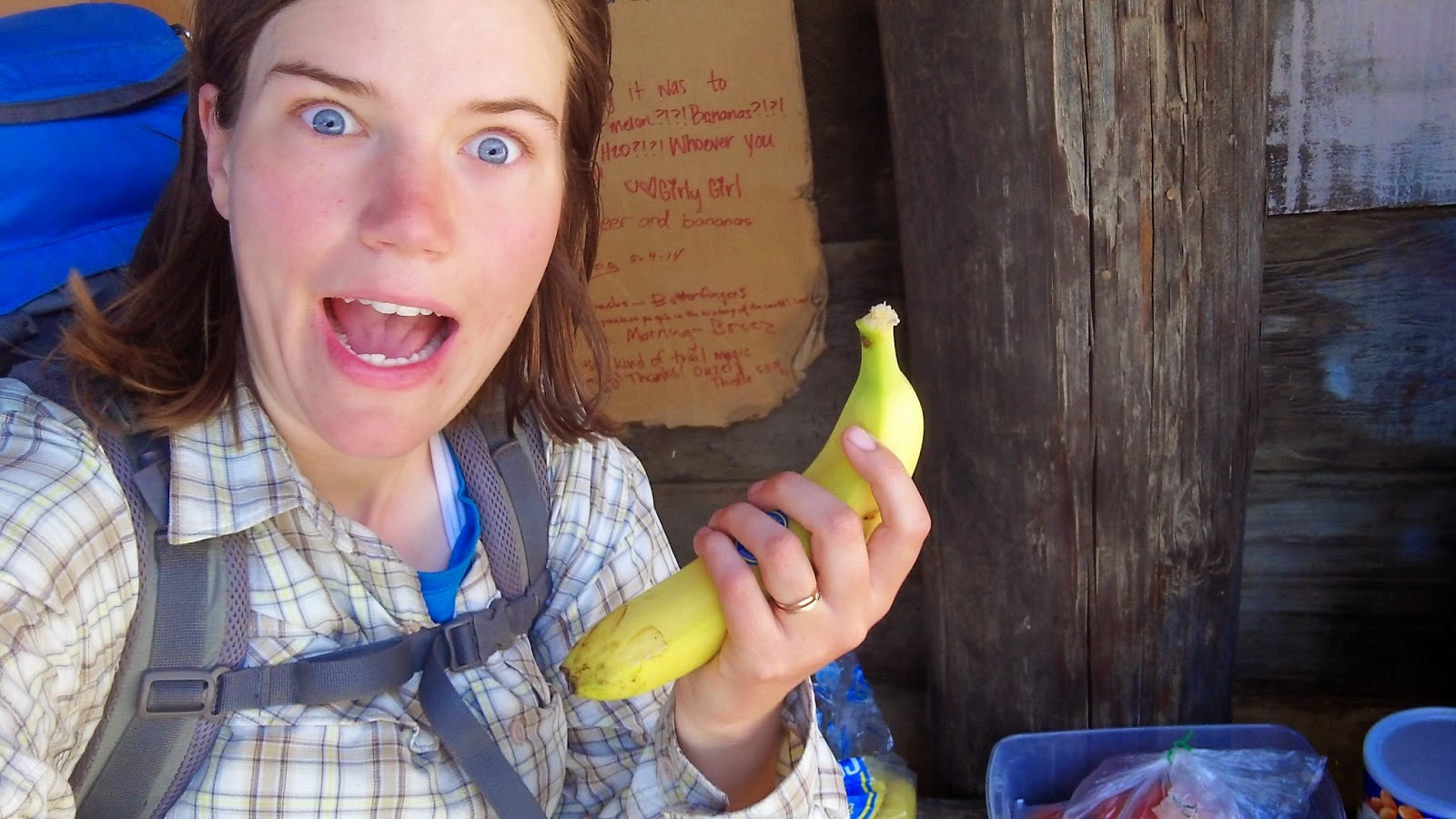 There was a cooler, with big sheets of cardboard hanging up on the bridge behind it. On top of the cooler sat a bunch of bananas. The cooler, full of half-melted ice, had a couple PBRs and soda.

In a dream, I picked a banana from the bunch and stared at it. Zach grabbed a soda and popped it, guzzling it as if he had never drunk soda before. I peeled the banana and bit into it. It was green, almost to the point of being crunchy, but it was the best banana I had ever eaten. Check that— it was the best thing I had ever eaten. Ever. It was the food to end all food, an explosion of flavor and coolness and moist fruity flesh. It made life worth living again. Suddenly, I didn’t want to murder someone. I wanted to hug everyone and dance and sing for joy. I’ve had many beautiful and intense experiences in my life, but eating that banana had to be up in the top three.

I put the banana peel in the trash bag next to the cooler, and scrawled a thank-you note on the piece of cardboard next to the other names. And then we were back out in the sunlight, in the wind, staring in despair at the highway and wondering how on earth we were going to get to Cabazon.

After much debate, we decided to go to Ziggy and the Bear’s, less than a mile away, and deliberate what to do there. We began trudging in that direction, up a hill and along the edge of a neighborhood of low-roofed houses.

We took a turn and followed the signs to Ziggy and the Bear’s. It was a ranch house with a white fence around the yard. An American flag flapped wildly in the wind. We followed the signs to the gate, and, opening it, stepped inside, shutting out the wind. For the first time all day, the air around us was relatively still. It felt downright quiet.

The place was not, in fact, quiet— there were a few dozen hikers there, chatting and doing camp chores. We walked down a hallway of sorts, with a washbasin on one side and a clothesline covered in hand-washed socks and underwear on the other. We turned to the right and found ourselves in the backyard, covered with a porch and a couple of awnings that flapped in the wind. The ground was covered in faded carpet and some bowling balls covered in mosaic tile adorned the bare retaining-wall gardens, next to a sign discussing ZIGGY’S RULES.

A lot of other hikers didn’t like this place because they couldn’t smoke weed and party it up, but we were ecstatic to find shelter from the wind and sun.

There were some couches and chairs under the porch, where several hikers sat taking foot baths. A girl with a rose tattoo on her thigh showed us around, pointing out a cooler with food for sale, the hiker box, the free tea and coffee, the donations jar, the electronic charging station, the camping area, the foot bath supplies, the laundry station, and the solar-heated shower. 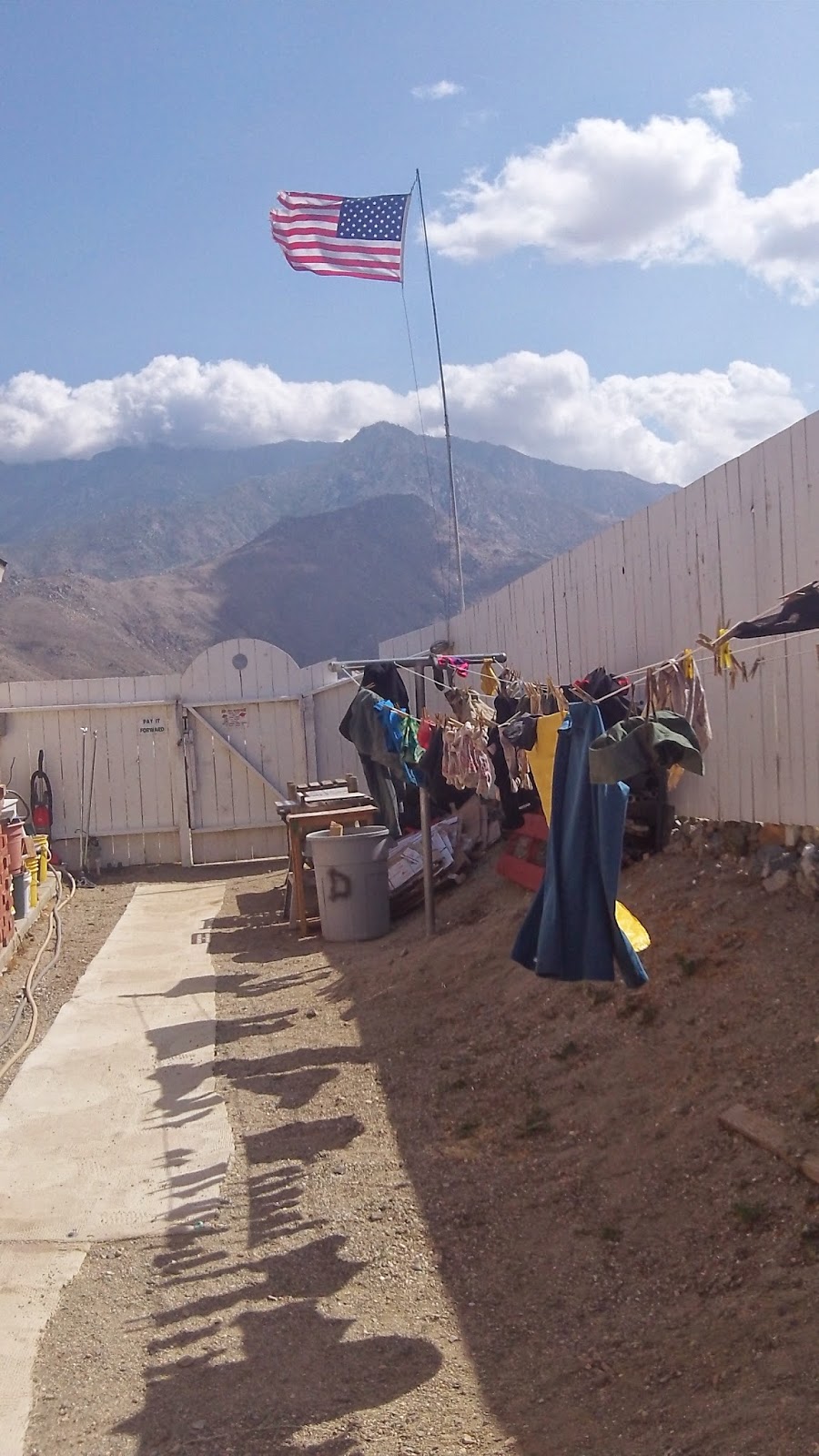 A woman in her forties named Sage Girl asked us if we had a package there. Sheepishly, we said that we had sent it to Cabazon. “Why did you do that?” she asked, hands on her hips. “You could’ve just sent it here and you wouldn’t have to go get it!”

Zach asked if there was any good place to hitchhike.

Sage Girl shook her head. “No, no way. Not a very good chance.” She looked at Zach hard for a minute. “All right, I’ll take you into town. I’ll see if anyone else is going.” With that, she turned and went off to recruit other people who needed to go to the post office.

Zach left with Sage Girl and four other hikers, and I stayed behind to do camp laundry and catch up on my journal. I saw Smokey there, although Anchor, Sad Fish and Banjo had hiked on. I washed our socks and hung them to dry. Zach returned with our resupply package and a Burger King hamburger for me— courtesy of another hiker named Hatchet. We also cooked one of our potato meals there, and it was the first time we made mashed potatoes that had the correct consistency, which was a huge morale boost.

Eventually, we decided we wanted to go on. I wanted badly to stay for supper and free ice cream— but it was hard to sit still, so I insisted that we hit the trail. Canada loomed in the back of my thoughts, and it was difficult to comprehend how fast or slow we should be going. 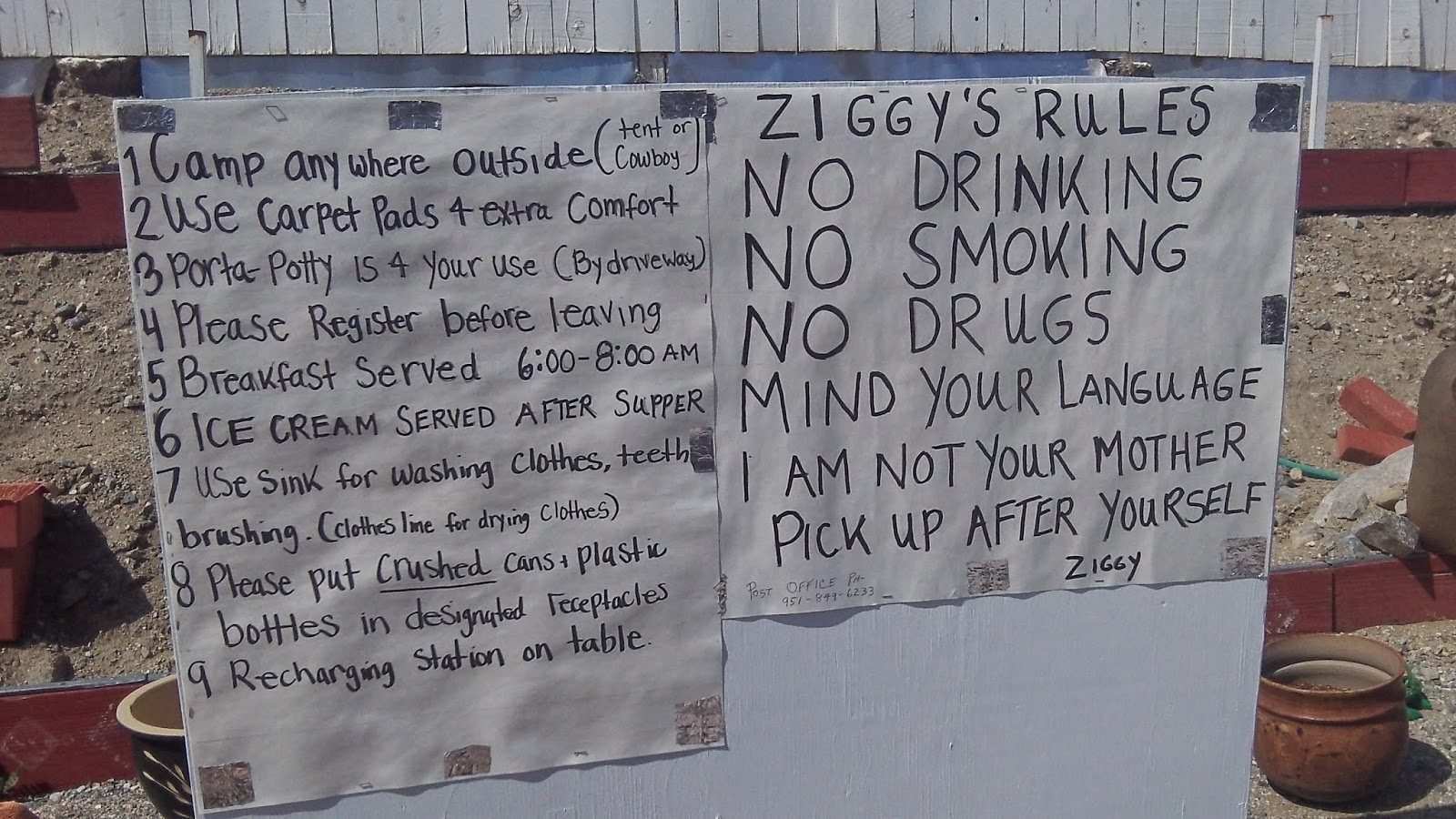 I was in a foul mood when we left. I felt like we were getting cheated out of free ice cream, and yet felt like we couldn’t spend the night. We had already lost too much time; we were already getting behind schedule!

The next eight miles were only better than the previous four because they were more beautiful and had solid ground on trail. The wind returned with a vengeance, and we hiked back up into the mountains, winding our way past windmills and into a windy, brush-strewn land that was a faint green as springtime started to come to life.

We walked on narrow trails along the side of a mountain, and the wind seemed to gust at us from every direction. For a while it would sweep down the mountainside, trying to force us off the edge of a cliff. The next minute it would lash at us from the open side, making us lean into it, only to die suddenly and make us quickly correct our balance to avoid falling sideways off the cliff. More than once, the wind literally knocked me to the ground. I was glad to have my trekking pole for stability, although the wind tried to snatch it from my hand whenever I lifted it from the earth. 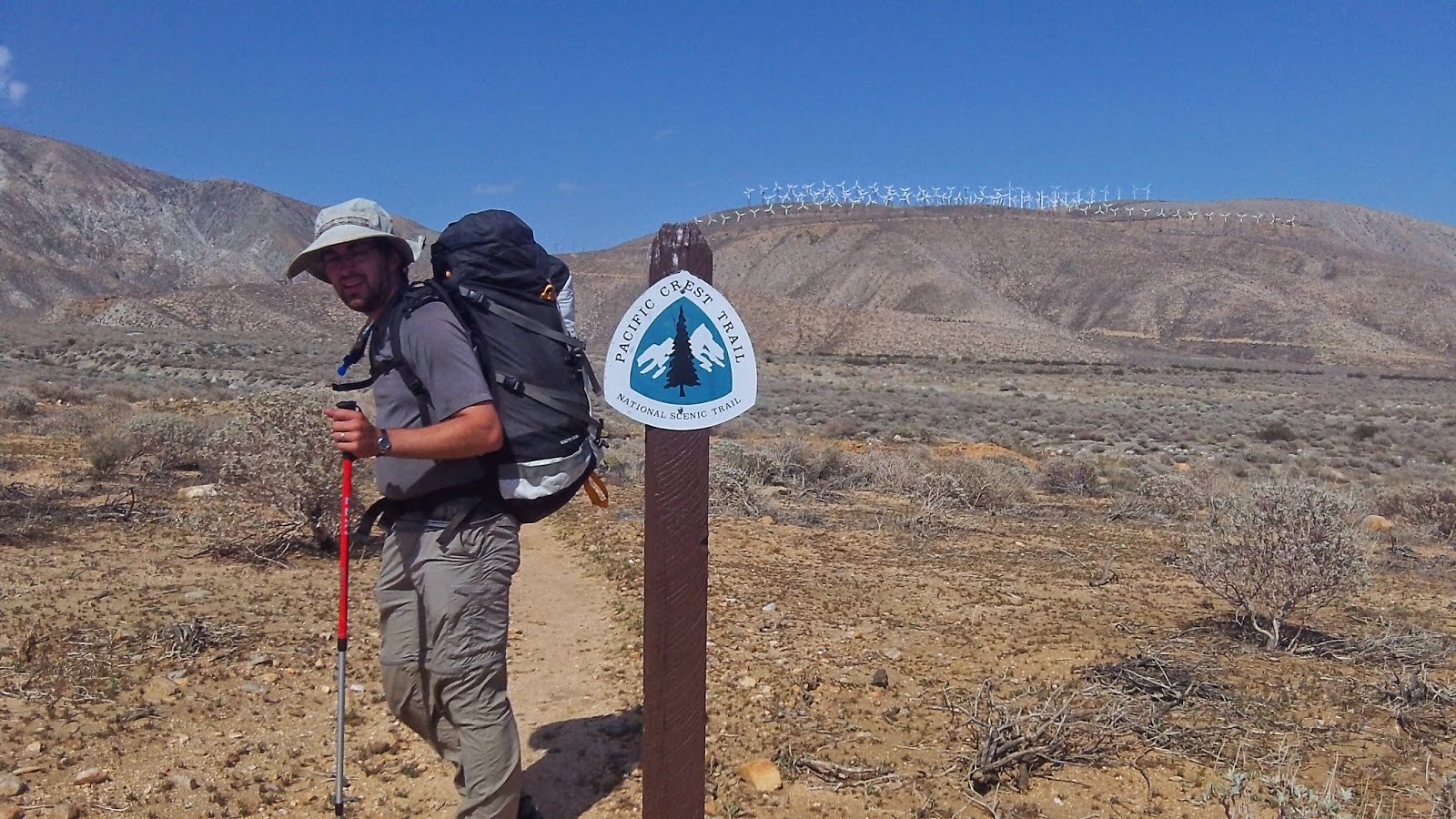 At last we descended into a valley which, although no less windy, was flat and less treacherous. We took a half-mile detour to get to a fish hatchery, which ended up being a manicured county park next to a massive sandstone cliff. We crossed a dry river bed covered in plants that made us feel like we had stumbled into an aquarium, and we looked for a place to camp in a huge lawn that PCT hikers were allowed to occupy, away from the informational plaques, the main fish hatchery, the pavilions, and the ranger house.

I laid down next to him, trembling with emotion. I felt like my body was out of whack, as if someone was injecting me with chemicals to heighten every whim of my emotions. I seriously wondered if I was going insane. Maybe it was all the sugar. Maybe my mind just couldn’t take it. I just knew that if I didn’t shape up soon, Zach would have every right to push me off a cliff. Even I could tell that I was getting unbearable.