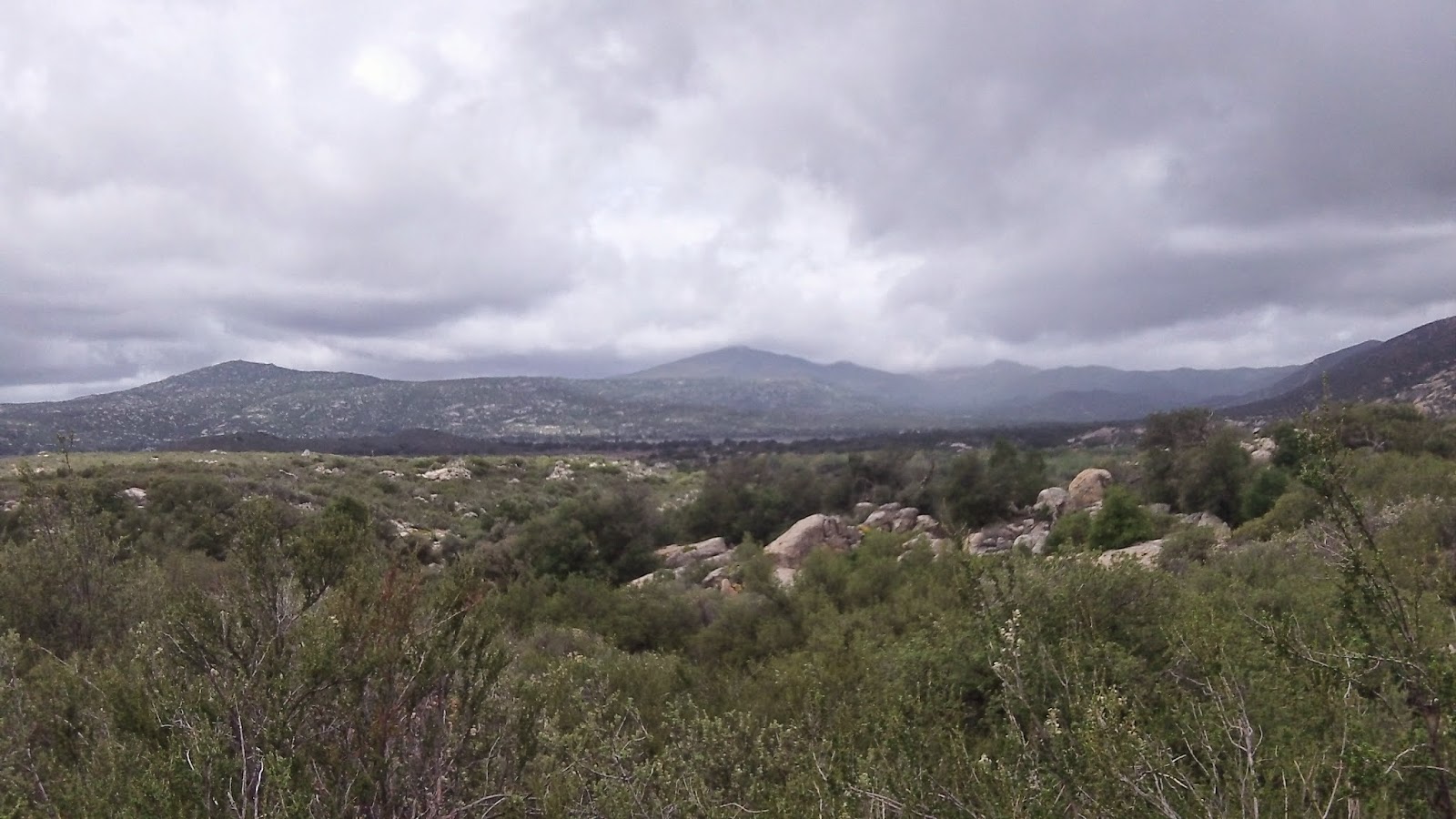 I woke up to the sound of rain, accompanied by the widespread sounds of dismay as dozens of new hikers with their ultra-lightweight tarps learned that they had not yet mastered their set-up. Zach and I snuggled in our double sleeping bag and listened to the patter of rain on plastic. My breath smoked in the air, even inside our tent. Wasn’t the desert supposed to be dry?

It was a long time before we felt like leaving our tent, but our bladders compelled us. I unzipped the door, shoved my feet into my trail runners, wrestled the shoes on, tried to lace them up with my cold fingers, then unzipped the rain fly and awkwardly disentangled myself from the tent, lurching into an upright position that made my feet flame up with nerve pain. (This series of gymnastics hereafter became my everyday morning routine.)

I wrangled my rain coat around me and pulled on a stocking cap. The wet, cold air closed around me like ice. I once again cursed myself for having a raincoat without a hood.

We were camped in the middle of a sea of tents that stretched across a couple of acres. People walked on the asphalt roads that wound through the park, hurried and silent. Zach and I made for the nearest building. The building was hot and steaming with body heat, since everyone was crammed under the shelter to keep out of the rain. There was a silent auction going on, and a presenter with a slideshow talked about the danger of different cacti in the desert. Zach and I wandered around, but we had no money to spend on anything, so there wasn’t much to do.

If you ask practically any other hiker but us how Kick-Off was, you’ll get a glowing report. The chili cook-off! The free food! The amazing, welcoming, instantly warm and friendly community! The freely-distributed pot! Zach and I missed all of it. We just wandered from building to building in the rain, feeling cold and miserable. Everyone else seemed caught up in the friends they had already made. I tried talking to some women in the bathroom, but they answered in monosyllables, and my shyness soon overwhelmed me and drove me back to Zachary’s side, where we stood under a tree (it was too muddy to sit), alone, and ate cold oatmeal for breakfast. 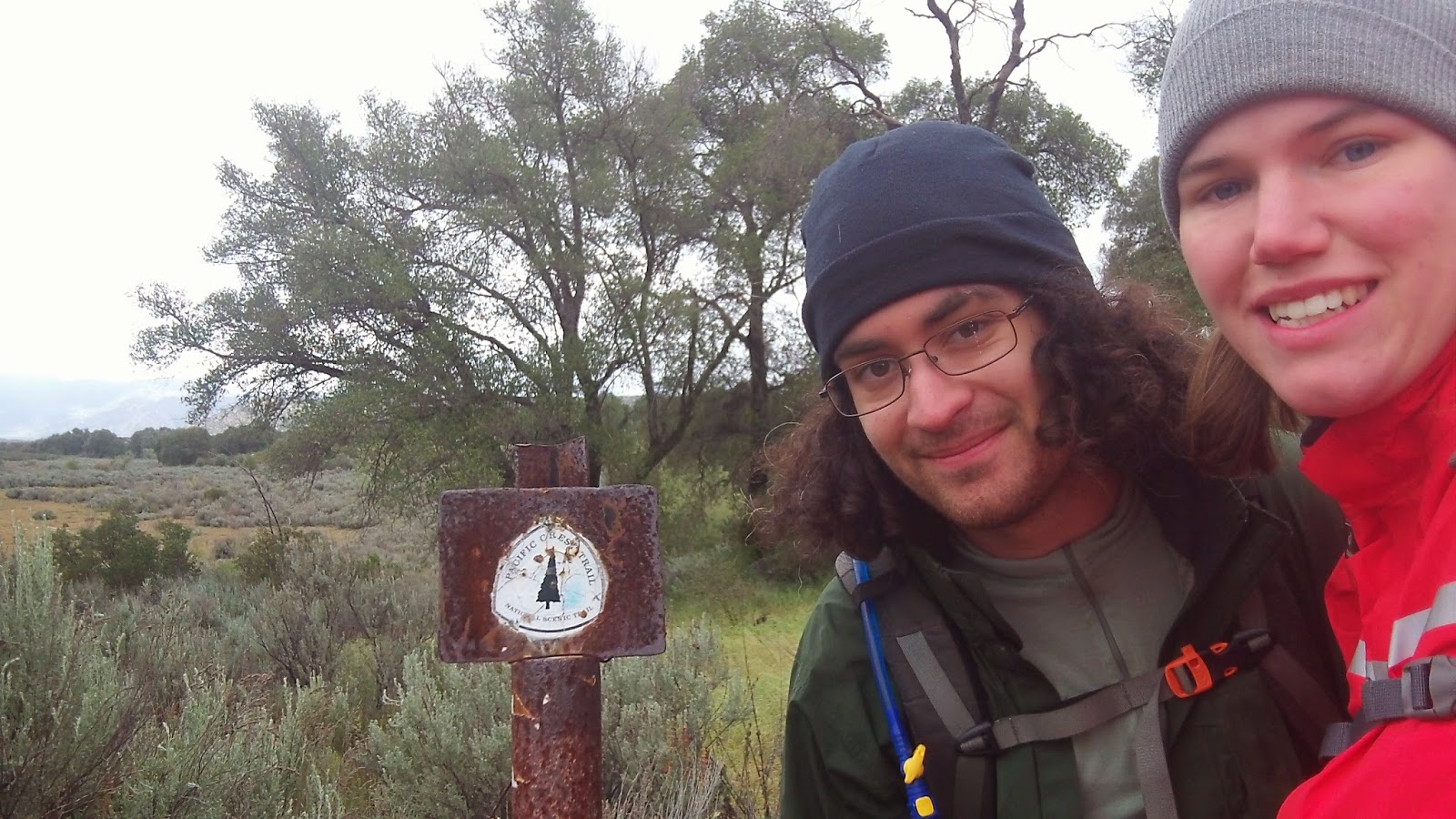 We wanted to be part of this community, but we didn’t know how. And around 11:30, when the rain started to slack off, and the clouds rolled and fumed and revealed patches of blue sky, we decided there was no point in hanging around at a cold, sopping kick-off party where everyone else seemed to know what was going on. We packed up our stuff, which took forever in those days, since we hadn’t devised a system of which gear went in which bag. We topped off our water bottles at a spigot, strapped on our packs, and hiked into a patchy drizzle, which soon cleared up into a genuinely beautiful day.

We hiked across a plain of sagebrush, and in that time, Zach’s knee began hurting a lot. We began to wonder if having trekking poles was necessary. Zach paused by a bridge to carve a walking stick, and that helped.

While we sat on a boulder overlooking a wide field of sagebrush, we were passed by a young woman, petite and bright-eyed, with a shaved head and a kilt. I instantly liked her, even though we only exchanged a pleasant hello. 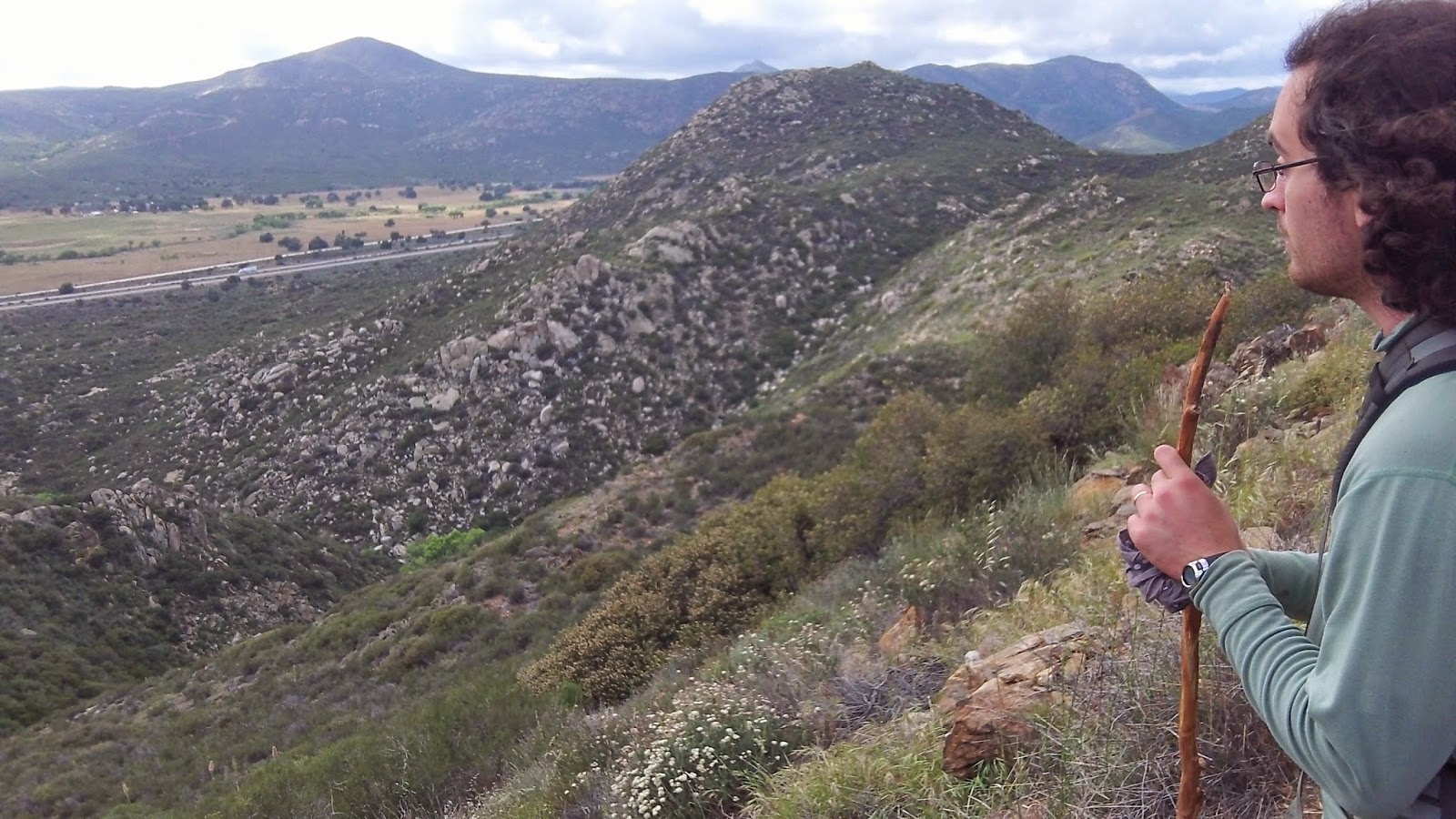 We walked through sagebrush, often crossing barbed wire fences that had pipe gates with solemn warnings to close the gate behind us, or else the cows would get out. We also saw some cows, usually in the distance.

We trudged up a mountain that day, and met a man named Starman. He had thru-hiked the PCT once, section-hiked it once, and was coming back to hike another chunk of it, although he wasn’t sure how much of it yet. I asked him what his advice to us was. “Lighten your load,” he said without hesitation, followed by a wistful sigh— “God! The lighter the better. And always keep track of your water. Also, never ever camp in a washout.”

By the time we crested our first mountain of the day, we both felt exhausted, and our maps said that there was a nice campsite near a stream just a couple tenths of a mile off-trail, down the highway we were crossing. As we paused to consider, two guys caught up to us. It was the pair from Colorado and Washington that we had talked to on the first day, Matt and Sam. We recognized each other and exchanged hellos.

“How far are you guys going tonight?” they asked. It would become a familiar question.

“Cool,” they said. “We’re hoping for another five miles.”

I felt self-conscious. They were going another five miles? Maybe we should go another five miles. After all, ten miles in a day was only half of our itinerary! Maybe we were slacking! We were so pathetic! We would never get to Canada!

But we turned off on the highway anyway, and clunked down the steep road until we came to a meadow with large trees on our right, next to a bubbling brook. A few other people were already camped there, but we found a nice spot underneath one of the trees. There was even grass. This really wasn’t at all like the desert I had imagined, and I was okay with that.

That night, Zach attempted to cook our first meal with our homemade alcohol stove. A cold wind had whipped up, making it almost impossible to keep the stove lit. Night fell fast— we were still a ways away from the solstice. I knew the desert got cold at night, but I had imagined myself safely tucked away in our sleeping bag by then, not standing with all my layers on, shivering uncontrollably, watching Zach fight with a stove just to boil enough water to make pasta. By the time we ducked into our tent, my fingers were completely numb. We had forgotten to put meat in the sauce. When I ate it, it tasted awful.

I began to cry. Zach tried to comfort me (he did back in those days, before he realized this was going to be a nightly occurrence). I was crying so hard I could hardly eat my food. I curled up in the sleeping bag, listening to the wind slashing against the side of our tent, and felt freezing. Zach put his arms around me so I could try to soak up his body heat. “It’s okay,” he whispered. “It’s okay.”

But I thought, If every night is going to be like this, it is not okay!